I think everyone here knows the Mississippi is flooding more.  But you might be surprised to know that it’s the worst in 400 years.  And that most of it is due to flood control projects. That’s right, flood control causes flooding.  According to research published in Nature this month.

I am not surprised.  I have testified three times about flooding caused by the Old River Control Complex.  It discharges about 23% of the Mississippi’s flow to the Gulf at Morgan City. That’s not enough to keep the river from backing up and flooding about a million acres of batture and backwaters. The discharge rate is limited by law, not capacity.  It’s a political bottleneck – 218 miles downriver that causes more flooding at Greenville.

There have been four floods since 2008 that were higher than the 1927 flood that put the Corps in charge of flood control. The current flood is third highest.  It crested March 17.  But it’s still 15 feet deep at my farm south of Natchez.

It seems that normal rains plus 90 years of flood control make hundred-year floods the new normal. The river is sending a message.

The 1954 Flood Control Act limited the Mississippi’s discharge at ORCC to 23% of its flow. That didn’t cause a bottleneck then. However, the flow has increased since then.  By 172,000 cfs or twice the average flow of the Missouri River.  The discharge rate hasn’t increased.  So ORCC has become a bottleneck. A political bottleneck.  It could be a relief valve.

The Mississippi was constantly meandering to find the flow path of least resistance to the Gulf in the 1950’s.  It was relatively benign.  It was above flood stage only one year in 10.  It’s 8 of 10 now.  It was 12 feet lower.  What happened?

In the 60’s the Corps dammed up Old River and its steep flow path down the Atchafalaya to the Gulf. It was nature’s relief valve. The Corps replaced it with the ORCC and set the discharge at 23% of the flow.

Over time the flow increased and the river rose due to Corps projects to straighten, shorten, and channelize the river. They were supposed to speed flow to the gulf and reduce flooding. Instead, they sped flow to the bottleneck, and increased flooding.

There is another bottleneck below ORCC – a natural one.  It limits the discharge to the Gulf at New Orleans.   LSU’s Dr. Xu says sediments have clogged the channel there — and that another 2011 flood could cause a levee break and change the Mississippi’s course.  It would be a disaster for US commerce, Baton Rouge, and New Orleans.

You can relieve both bottlenecks, decrease flooding, and the risk of disaster if you increase the discharge at ORCC. The Corps modeled the effect on the 2016 flood of increasing the discharge rate to 32%.

The discharge increased 220,000 cfs (2 ½ Missouri Rivers) and lowered the crest 8.3 feet at Baton Rouge – from 8 feet above flood stage to .3 foot below. It shortened the flood and reduced levee risk.

ORCC can discharge 50% of the Mississippi’s flow most of the time.  For example, when a March rise prolonged the 2016 flood, the discharge could have been increased by 4 ½ Missouri Rivers.  And farmers could have planted earlier.  Let’s change the law and use ORCC’s capacity as needed to reduce flooding and risk of levee failure.

Corps experts say Congress would change the law if they said it would make the system operate better. But they say it’s operating at the optimum now.  So, no need to change.  But the river is sending a different message.

Flow has increased. The discharge rate hasn’t.  The river has clogged up.  It’s rising.  Flooding is at a 400-year high.  Floods take months to drain.  And destroy our property and livelihoods.  Mark Twain might say: “Reports of ORCC’s optimum operation are greatly exaggerated.”

I say it’s time to change the law so the Corps can use ORCC’s full capabilities as a relief valve to reduce batture and backwater flooding.  And hopefully delay a course change disaster. 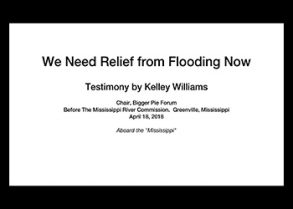