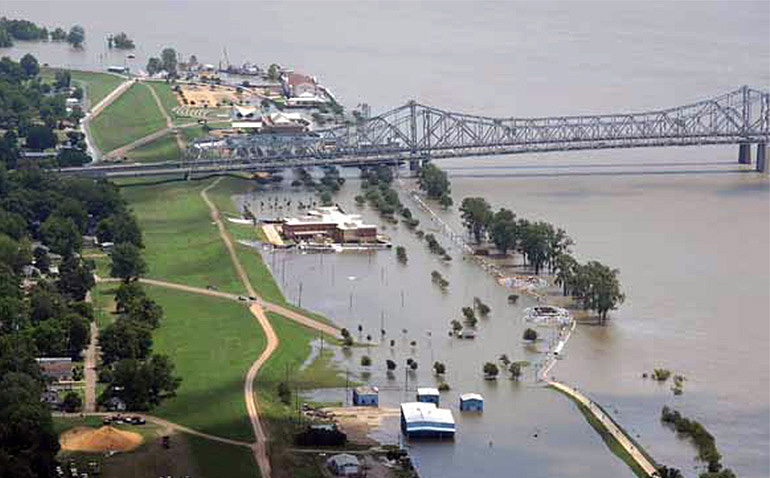 Since 1950, the Natchez Mississippi River (MSR) gauge has recorded forty three (43) days above flood stage in July.  Thirty one (31) of those days were recorded in July 2015 and the other twelve (12) days in July 2019 — as of July 12th.  July 2019 will probably record all thirty one (31) days above flood stage.  The flood of 2015 spanned ninety two (92) days that spread over 6 months with a period in the middle with water below flood stage.  The Natchez flood waters of 2019 hit flood stage by January 4th and have remained there for 190 days and counting.

Yesterday, authorities in New Orleans warned citizens of the danger of the Mississippi River levees around the city overtopping as the rains from the seasons first tropical storm Barry hits the Big Easy.  But heavy rains in New Orleans in July are not rare.  They occur during the hurricane season.  No, the authorities stated the reason for the risk of levee overtopping is that the MSR is at 17 ft., a very rare event for July.  The MSR has been at 16-17 ft. for months and has little capacity to hold the rain water pumped and draining from the surroundings.

Why is the river so high in July?  Why has the MSR from below Natchez to north past Vicksburg been 4-5 ft. higher on average over the past decade during low water months than it was 50 years ago?  Rainfall on average is about 7% higher and there has been some shift in rain patterns.  The surface of the Gulf of Mexico has risen a few inches since 1970.  But a big reason the level of the MSR is higher, (both high rain season and low are higher on average) is that the water can’t get out to the Gulf of Mexico as fast as it can arrive into the Baton Rouge, Natchez to Greenville reaches of the MSR.

Sedimentation just below Old River Control Structure (ORCS) has created a major restriction in the river channel.  The water can’t get past the ORCS as fast as it reaches it.  The elevation of the MSR is rising.  Since the 1970s, the river has risen in both heavy and light rainy seasons.  Natchez, as the closest gauge above the ORCS, serves as the canary in the coal mine, so to speak, for a changing river system.  This backing up of the river can be observed to Greenville.  Natchez, however, shows a number of river changes first and most starkly.

Waters that get past the ORCS then must contend with almost no drop (head) to the Gulf, Gulf surface waters that are higher than much of the water in the MSR, a second restriction in the MSR channel below Venice, LA and much more (See our articles “The River Stands Still” and “A Deep Dive Into the Lower Mississippi River”.)

We certainly hope for New Orleans that the levees ain’t gonna break.