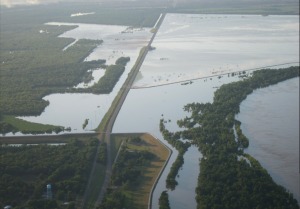 Last year at this time Mississippi suffered from the worst January flood on the Mississippi River in recorded history.  It was the second 100 year flood in five years after the all time record flood in 2011.  Coincidence? Unlikely. The odds are over a thousand to one against it happening by chance.

The 2016 flood made the news when deer season closed a month early.  Over 1.2 million acres flooded in Mississippi in 2011.  The damage in 2011 and 2016 was estimated at $3 billion. The record January flood was unusual.  But major floods aren’t.  Mississippi has had seven in the last ten years.

The money has gone for levees, spillways, reservoirs, cutoffs, dikes, and other projects to straighten and shorten the Mississippi, contain the rainfall and snowmelt, and speed it downriver.  One result seems to be worse flooding downriver in Mississippi and Louisiana.

Annual rainfall in the Mississippi River drainage basin has not increased significantly since 1950.  But the rate of runoff has increased due to development along the Mississippi and its tributaries.  So the flow funneling downriver is greater following heavy rains and snows, and it reaches Mississippi faster.

Bottleneck.  These surges coming downriver can’t get out to the Gulf fast enough.  The Corps has not increased the discharge rate to handle the faster flows.  So the water backs up in Mississippi and north Louisiana because they are at the bottom of the funnel.  Mississippi floods more because it has no levees south of Vicksburg and because the Yazoo River backs up for miles in the Delta.

The flow downriver splits at the Old River Control Structure just south of the Mississippi line.  The Corps operates the structure to send a maximum of 30% down the Atchafalaya River via this shorter steeper route to the Gulf at Morgan City, Louisiana.  The other 70% eventually flows into the Gulf via New Orleans.

The Atchafalaya can take more flow.  This would increase the total discharge and lower the level of the Mississippi from Natchez to New Orleans.  This would reduce flooding in south Mississippi and north Louisiana with little or no increased flooding along the Atchafalaya most of the time.  It would also reduce flood risk at Baton Rouge and New Orleans.  Why not do it?

The Corps says it can’t because congress fixed the 70-30 ratio in the 1954 Flood Control Act. This reading of congressional intent is questionable.  But it has the precedent of many years of practice when the cap on the flow down the Atchafalaya wasn’t a problem.

It is a problem now.  The problem started in 1972 when the lower Mississippi began to rise. The annual low (and high) stage trend lines at Natchez are about ten feet higher now.  So floods have a ten foot head start.  The River is rising in the Vicksburg and Greenville reaches too, although not as fast.

The Mississippi is not draining to the historic lows of the nineteen fifties, sixties, and early seventies.  It appears to be silting in.  Some Corps projects may have caused this.  The river bed slope is getting flatter.  It’s becoming a holding pond south of Vicksburg.

Solution.  How would more flow down the Atchafalaya help?  It would increase the total discharge to the Gulf and the rate at which the Mississippi River drains.  This would lower the low stages and the frequency and severity of floods from Natchez to New Orleans.

Who would benefit?  Land and property owners and cities and towns along the Mississippi and its tributaries in Mississippi and Louisiana.  Who would be harmed?   Possibly Morgan City and some property owners along the Atchafalaya.  However, this could be mitigated by diverting more flow at Old River when the Mississippi is low and less when it’s high and by increasing outflow capacity of other outlets to the Gulf on the Atchafalaya.

Baton Rouge and New Orleans would benefit from more flow down the Atchafalaya to relieve major floods.  The Morganza Spillway is designed to do this.  However, it nearly didn’t in the 2011 flood because of changes in the river.  Old River could provide spillway flood relief earlier and more reliably.

Who can give the Corps the authority to vary the flow split at Old River to reduce flooding in Mississippi and Louisiana?  Congress.  Mississippi Senators Cochran and Wicker serve on committees that authorize funding for and monitor the Corps.  Senator Cochran chairs the Appropriations Committee.  They could include language in future committee reports to clarify that the Corps has the authority to vary the flow at Old River to mitigate flooding.

We have talked with the Senators’ staffs about this.  We have also talked with Congressman Harper whose district includes Adams and Wilkinson Counties which bear the brunt of the flooding now.  They are supportive.  Secretary of State Hosemann is working on this too.  He is responsible for Mississippi’s 16th Section lands damaged by the flooding.   Other Mississippi elected officials could lend their support.

Speak up.  If you are a land or property owner, farmer, sportsman, or otherwise affected, please speak up.  You could make a difference.  For more information on Mississippi River Flooding go to: