I appreciate your invitation to testify again. I will testify about backwater flooding at Vicksburg.  It’s bad and getting worse — as others will attest.  I have testified before.  About batture flooding at Natchez and Baton Rouge.  It’s also bad.  I learned that flood victims there don’t know (or care) that others up and down river are flooding too.  And are flooding for the same reasons.

I think we are more likely to reduce the flooding if we work together — and with the MRC and Congress.  That’s why I’m here.

As I said, I think we are flooding for the same reasons.  Here are two slides that show the flooding at Vicksburg.  Backwater flooding happens when the river is above flood stage. Over 600,000 acres flooded in 2011.

I noticed in looking at flooding at Natchez that the river started to rise about 1973.  And it began to flood more.  I wondered why.  I looked at rainfall.  It has changed very little. Not enough to explain the rising river and the increasing flooding.

What happened about 1973?  Then I thought about the Old River Control Complex. It’s always on my mind anyway because it’s just downriver from our farm.  And its operation affects the river stage there.  It’s where part of the Mississippi splits off and flows down the Atchafalaya to the Gulf at Morgan City.

Maybe the rise and increased flooding that began in the early seventies was a delayed effect of the ORCC.  And of faster flow down river due to cutoffs completed in 1942. They straightened the river and shortened it by 152 river miles.  And maybe the recent increases were due to faster runoff from rain and snow upriver because of increasing development.

It looks like the increasing flooding correlates with the rising low stage.  So why is the low stage rising?  It might be because the river is not draining.  If so, what to do about it?  Let more water out.  Where? The Old River Control Complex.  It has excess capacity.  But the 23% limit is a limit.

But then the flow downriver increased.  The average for 1973-2016 was up 22% over the earlier period.  And the average for the last 10 years was up 26%.  However, the 23% didn’t change.  So, the flow to New Orleans increased faster than it could discharge there. And the river rose and flooded more.

If you manage the discharge to drop the low stage, you can increase the flow when the river is below flood stage and moderate the downstream effects on the Atchafalaya.

Why not just do it?  Why not use ORCC’s capacity to prevent floods?  Seems like a good idea.

It just takes the Corps and the MRC to tell Congress it’s a good idea.  And for Congress to agree. 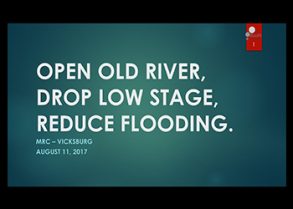