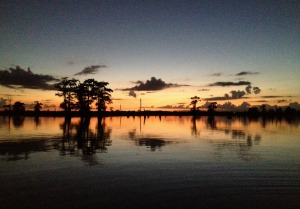 The Mississippi River Commission held a public hearing in Natchez last Wednesday aboard the Motor Vessel MISSISSIPPI. It got an earful.  Many witnesses testified about damage to their properties and businesses and lives from annual flooding and frequent major floods.  Most live and work in the Natchez reach – the 60 miles from Natchez to Old River just south of the Louisiana line.  It’s the lowest stretch of the river that receives the full flow before it splits at Old River.  It’s ground zero for flooding

and a leading indicator for Mississippi River floods.  It’s a flood canary.

Early coal miners took a canary underground to warn them about poisonous gases. A sick canary signaled a looming disaster. Mississippi’s floods signal looming disasters. But there’s time for the Mississippi River Commission and the US Army Corps of Engineers to act before there’s a catastrophic levee failure.  It’s time for our congressional and state leaders to encourage that action.  Louisiana’s too.

What’s causing the flooding? It’s not more rain. The annual rainfall trend line in the Mississippi River Drainage Basin has increased only 4 inches in 65 years.  It has been virtually flat the last 40 years.  But the rain that does fall gets to the mouth of the Mississippi faster than it can get out to the Gulf.  It runs off into the river and its tributaries faster due to residential and commercial developments that shed water faster than forests and farmland.  And it gets downriver faster because the Corps straightened and shortened the river 150 miles with 16 cutoffs between Memphis and Old River.  But the Corps did not add an additional passage to the Gulf as needed to handle the faster flow. It funneled the faster flow into a bottleneck.

The bottom of the funnel is between Natchez and Old River.  It has silted in over time.  As a result the low stage trend line of the river is ten feet higher at Natchez than it was in 1950. This means floods have a ten foot head start.  They are higher than they otherwise would be – not just at Natchez but up and down the river.  They are also higher because the Corps has built more and higher levees.

As predicted the flow increased and the stages (water level) fell above the cutoffs.  And as also predicted the flow decreased and the stages rose below the cutoffs because the faster flow had nowhere to go. It took time for this to happen.  About fifty years.  The Corps made the last cutoff in 1942.  The low water (batture) floods began to be more frequent and longer about 20 years ago. They are now annual events that last for months.

The most effective testimony at the hearing was the shortest.  It was a tirade by a somewhat disheveled older gentleman.  The road to his place has been under water for months. He glared at the Commission and yelled: “I just wanna’ go home. I can’t. It’s your fault.”  The presiding General politely thanked him for his “passion.”

In addition to the annual floods, there have been two recent major floods. The 2011 flood at Natchez was five feet higher than the great 1927 flood.  (Higher levees mean higher floods.)  It flooded 1.2 million acres in Mississippi – although no levees failed.  The 2016 flood was the highest December flood ever.  Total estimated 2011-2016 flood damage in Mississippi is over $3 billion.

A sick canary? Both floods were one in a hundred year events.  The odds of two such events within five years are less than one in a thousand.  Just chance?  Maybe.  But maybe a dying canary.  Levees at New Orleans and Baton Rouge were just inches above disaster in 2011.

So what can be done?  Let more flow out to the Gulf.  How?  Where?  The flow splits at Old River which diverts some of it to the Atchafalaya River and thence to the Gulf at Morgan City.  It’s the bottleneck.  For 60 years the split has been 70% down the main channel to New Orleans and 30% down the Atchafalaya. It is 193 miles shorter and steeper.  It can handle more flow.  It seems to be the most viable alternative to the needed new passage that wasn’t built.

Who can change the split? Legend has it that the 70-30 split was authorized by Congress and must be changed by Congress.  But the legislative language is not specific about the split.  The intent seems to be that Congress wanted the flows and sediments in the main channel and in the Atchafalaya to be in desirable proportions.  That seems to have morphed into a hard 70-30 split.  The proportion of the flows and sediments now after 60 years are clearly not desirable as flood events are demonstrating.  It appears the Corps can change the split to send more flow down the Atchafalaya, but probably won’t without a nudge from Congress.

What are the pros and cons of more flow down the Atchafalaya?  More flow will increase the total discharge – it will speed the water to the sea.  This will lower stages in the main channel and reduce the height and the duration of floods up and down the river.  It will reduce batture and backwater floods in Mississippi and the risk of levee failures at Baton Rouge and New Orleans.  It will send more flow and sediments down the Atchafalaya and reduce wetlands loss there.  However, greater flow will increase risk of flooding at Morgan City.

Politics. The engineering answer seems simple.  The politics are not.  Mississippi benefits as do states up river.  Baton Rouge and New Orleans benefit, but Morgan City may suffer.  Secretary of State Delbert Hosemann presented Mississippi’s case at the hearing.  Staffers for Senator Wicker and Congressman Harper attended.  We have briefed our congressional delegation.  They understand and are supportive.

If you have a flooding problem, speak up.  See biggerpieforum.org for more information.