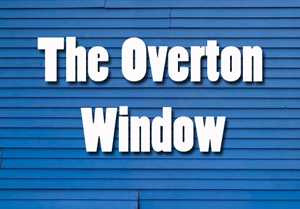 What do Donald Trump, the Kemper County Lignite Plant, and Mississippi River floods have in common? The Overton Window explains all three. Yeh, sure. What’s the Overton Window? It’s a nerdy way of saying people believe what appears obvious until it’s no longer obvious. It used to take longer for public opinion to change. But the rise in independent Internet views and the dying monopolies of newspapers and TV networks have shortened the process. Now when change begins, it can snowball in a hurry. That’s called a preference cascade.

Radical to popular. Joe Overton, now deceased, was a think tank public policy wonk. His concept describes how political ideas evolve step by step from unthinkable to radical to acceptable to sensible to popular to policy. This correlates with changes in public opinion (i.e. conventional wisdom) which evolves in a similar fashion.

The Donald is a warp speed example of change. He has destroyed the Overton Window that once framed presidential elections. He has gone from reality show candidate joke to presumptive Republican nominee. He has labeled one character-challenged Democratic candidate a crook. The other candidate has self-labeled himself a crazy socialist joke. The Donald has also made some big time Republicans ill and irrelevant. (Some say they made themselves irrelevant.)

Extreme? Some say The Donald takes Muhammad Ali’s “I’m the greatest” to gross extremes. But, heh, it worked for Ali – who wasn’t universally admired either. And as Mississippi’s own Dizzy Dean said: “It ain’t bragging if you can do it.” It remains to be seen if the Donald can do it. But he has probably forever changed the Overton Window for presidential elections.

The Overton Window for electric utilities in Mississippi used to be framed with trust and respect for the companies. They had public good will from decades of community service from legions of dedicated employees. They restored power after ice storm and hurricanes. They appeared to have the customers’ interests at heart. They had the benefit of the doubt from Public Service Commissioners who usually dutifully approved rate increases. One commissioner ruefully said of the company’s misrepresentations about Kemper: “They never lied to us before.” They had the legislature on a leash. They had a governor as cheerleader who spent his credibility and political capital on Kemper – until it ran out. They had the usual economic development suspects touting the plant and its higher rates as good for jobs.

Mississippi Power self destructs. But Kemper has changed the Overton Window for Mississippi Power – and probably other companies too by association. The soon to be $7 billion plant is an experiment too far. It was a tough sale from the start. It took some really clever spin and sleight of hand to make what was supposed to be a $2 billion lignite experiment seem better for customers than a $500 million off-the-shelf natural gas plant. It was supposed to be cheaper in the 40 year long run if natural gas supplies dried up and prices went to the sky. It’s “fuel diversification” was supposed to reduce natural gas cost and supply risk although it can’t run without natural gas. It was supposed to boost Mississippi’s enhanced oil recovery by supplying byproduct carbon dioxide – although there’s plenty of naturally occurring carbon dioxide available from the Jackson Dome.

And, oh yes, it was supposed to run too – two years ago. But the endless construction delays, cost overruns, and misrepresentations that keep surfacing have taken a toll. So have the company’s efforts to avoid disclosure (with it seems an assist from the PSC). The company says not to worry, customers won’t pay a dime more for it than the $2.8 or $3.2 or $4.1 billion “cap.” That’s the cap that keeps growing that resulted from a secret meeting. The Mississippi Supreme Court said the meeting was illegal. Customers wonder why they should pay a dime more than the $500 million cost of a natural gas plant. The PSC said they should pay $800 million for Kemper’s turbines running on natural gas and increased rates accordingly. Oh, by the way, Mississippi Power’s rates were already the highest in the state.

Respected Corps. And then there’s the Overton Window for the storied US Army Corps of Engineers and its projects on the Mississippi River. It’s now framed with respect and appreciation. Congress put the Corps in charge of the river after the great flood of 1927 with the charge: don’t let it happen again. It hasn’t. Some close calls in 1973, and 2011, and 2016. But no catastrophes. And some tradeoffs in 2011 when the levee at Birds Point, MO, was blown to keep Cairo, IL, from flooding and when the Morganza spillway was opened to protect Baton Rouge.

The Corps’ projects include higher levees, reservoirs, emergency spillways, and cutoffs to straighten and shorten the river. An additional outlet to the Gulf near Morgan City was considered to speed the faster and greater flow from the straighter shorter river. This additional capacity was never added. It seems to be needed now.

The river is backing up in Mississippi because it can’t get out to the Gulf. The land between the river and the levees and the hills south of Vicksburg (where there are no levees) now floods more frequently and longer. So does the land along the Yazoo and other tributaries because it can’t drain into the river.

Ominous portent. This annual flooding is not a catastrophe like a levee break. But it may portend one. The trend line at Natchez since 1950 is about ten feet higher at low stage now. So it takes less flow to flood low lying land and to reach flood stage. There have been two one-hundred year floods in the last five years. New Orleans narrowly escaped both.

When there is a catastrophic levee failure due to limited discharge to the Gulf, the Corps’ respected Overton Window may be a casualty.