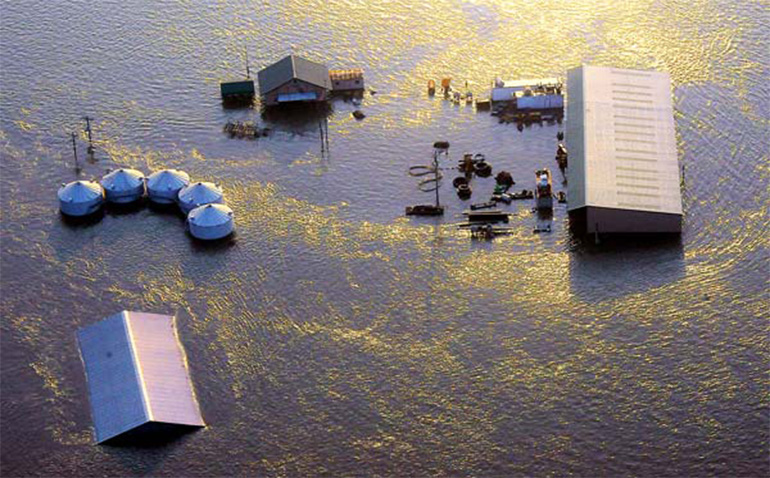 Q.  What is a Mississippi River Flood?

A.  An event that causes the river to cover land not normally under water.  Levee breaks cause floods.  There hasn’t been a main line levee break since 1937.  But it floods anyway — when the river gets higher than the land between its channel and the levees and hills that contain it (the batture). And when the river gets higher than the Yazoo and other tributaries that flow into it and causes them to back up (backwater flood).

Q.  How big are batture and backwater floods?

A.  Two million acres in Mississippi and Louisiana flooded in 2011 and caused $3 billion estimated damage.  Thousands of acres in Mississippi flood every year. Its batture contains 600,000 acres. It is 400 miles long and up to seven miles wide between the river and the hills below Natchez.  The Yazoo, Big Black, and Homochitto Rivers have large drainage basins that have backwater floods.

Q.  How are floods measured?

A.  Flood metrics include height, flow, duration, frequency, timing (when they occur) and damage. Height, duration, frequency and timing are observed.  Damage is estimated.  Flow is calculated.  Generally, the greater the flow, the higher the flood.  The 1927 flood had the greatest flow, but wasn’t the highest because levees broke and released it.

Q.  Where are floods measured?

A.   River height or stage is measured at river towns like Greenville, Vicksburg, Natchez and at other locations.  Each location has its own gage and “flood stage” not correlated with elevation or other gages.  For example, flood stage at Vicksburg is 43 feet, 48 feet at Natchez, and 35 feet at Baton Rouge.  The highest stage ever measured at Natchez was 62 feet in 2011, and the lowest was minus 2 feet in 1940.  (The river is not dry at zero on the gage.)  Batture and backwater floods begin well below flood stage.

Q.  What do the measurements show?

A.  The river is getting higher, and floods are getting higher, longer, more frequent and more unpredictable.  Trends are ominous.  Historically, floods were moderate and often beneficial springtime events caused by winter rains and spring snow melt – with occasional outliers.  That changed in the 1970’s when the river began to rise.

Q.  How much higher is the river?  Why does it matter?

A.  The average low stage at Natchez is 12 feet higher.  It increased from three feet in the 1950’s to 15 feet in the decade ending 2017.  The average high stage increased 11 feet — from 43 feet to 54 feet.  Not surprisingly, higher stages correlate with more frequent, longer and higher floods.

The river in the Natchez reach exceeded flood stage once for 46 days in the 1950’s.  It was above flood stage eight out of 10 years ending 2017 for a total of 389 days — eight times longer.  Four of the five highest floods ever measured have occurred since 2008.  The average high stage increased from five feet below flood stage to six feet above flood stage.

The batture floods completely around four feet below flood stage.  Lower elevations naturally flood first.  For example, rising water prevented harvesting low-lying crops in the Natchez batture this October although it didn’t flood completely until November. In the 1950’s, it flooded four years out of ten for 106 days total.  It flooded every year in the decade ending 2017 for 788 days — over 7 times longer.

Q.  Correlation is not causation.  Could flooding be due to more rain?

A.  More rain is a factor.  But the increase is slight and doesn’t explain the higher river, record floods and ominous trends.  Average annual rainfall of the last 10 years is 13% higher than the 1950’s.  But average flow downriver is up 30% — over twice as much.  Moreover, wet years and dry years have been known since biblical times.  Prudent engineers design for wet years.  Four one-in-a-hundred-year floods since 2008 caused by normal rainfall suggests a lack of prudence.  Odds are 325,000 to one against such a cluster of rare events.

A.  Increased flooding is 75% due to flood control and 25% to weather and is the worst in 500 years according to a study by scientists at the Woods Hole Oceanographic Institution published April 2018 in Nature International Journal of Science.  Manmade changes to the river that were intended to control floods have perversely caused more flooding.  There were major changes in the 1940’s, 50’s and 60’s.  BPF thinks abnormal floods today are due to their cumulative effects.  Hence, we examine them.

Q.  Who is responsible for the changes?

A.  Congress, the Mississippi River Commission (MRC), and the U.S. Army Corps of Engineers (Corps) are responsible for the changes.  Congress created the MRC in 1879 and put it in charge of the river. It had a “levees only” policy until the great flood of 1927 showed that didn’t work.  So, Congress passed the 1928 Flood Control Act authorizing the Mississippi River & Tributaries Project (MR&TP), told the Corps to implement it, and the MRC to supervise.  The MR&TP added reservoirs, cutoffs, floodways, training structures and more and higher levees. It focused on containing floods and preventing levee failures.

Q.  What were the changes?  Why were they made?

A.   The changes were intended to make floods shorter and lower and to keep the Mississippi River from changing course.  But they sent flow downriver faster than it discharged to the Gulf.  This caused the river to rise and flood more.  Bad engineering.  Changes included: (1) Cutoffs that shortened and straightened the river and sped its flow; (2) A dam that blocked discharge of the faster flow down a natural channel and a replacement structure to control the flow; (3) A spillway that’s supposed to discharge excess flow, but doesn’t and floodways that were planned, but not built.