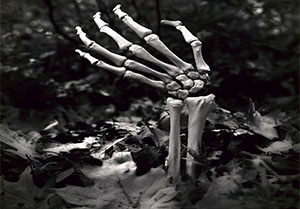 County Lignite Plant.  So customers won’t pay for most of its $7 billion cost.  But the PSC may allow $300 million more in gasifier collateral costs for its turbines running on natural gas. These toes are still sticking up. The PSC should bury them too.

Now that this boondoggle has been mostly buried, another is being exhumed.  That’s the Yazoo Backwater Pumps Project.  It was first proposed in 1941.  It was finally killed by the Environmental Protection Agency in 2008.  Its tomb was sealed over in 2012 when the Fifth Circuit upheld the District Court decision against the Mississippi Levee Board’s challenge to the EPA ruling.  But a bony hand is emerging from the tomb.

It’s being resurrected by Section 433 buried deep in the 2018 draft Farm Bill.  It’s being called forth like Lazarus by Mississippi’s powerful Senior Senator and Chairman of the Senate Appropriations Committee.

The Mississippi Levee Board, the Delta Council, their constituents, potential contractors and suppliers are lobbying for its resurrection.  The US Army Corps of Engineers has stacked its bureaucracy with true believers to shepherd it. The Corps has backed the project since it was first included in the Mississippi Rivers and Tributaries Project in 1941.

The MR&TP was authorized in 1928 to control flooding on the lower Mississippi.  The Corps has spent $13 billion on it and says it has saved $354 billion in prevented flood damage.  That’s government math: real expenditures and imaginary savings.  It was used to try to justify the first pumps project.

You can expect the same kind of math to justify the resurrection.  It was used to justify Kemper.  It too was sanctified by powerful politicians.  It too was wrong.  However, Mississippi Power’s stockholders paid for the Kemper boondoggle (or most of it).  Taxpayers are on the hook for the pump resurrection.

The resurrection will provoke another David and Goliath fight.  Dueling experts will model its effects.  Politicians will cite the model that favors their constituents to make a decision.  David won the first fight when the EPA vetoed the original project in response to concerns by environmentalists, conservationists, sportsmen, property owners, and taxpayers.  They thought it smelled.  It helped a favored few, but hurt many more.  Sounds like Kemper

The resurrection smells even more.  Its abuses are even more blatant. The draft bill specifically prevents administrative review and disregards the prior EPA ruling and court decisions upholding it.  The resurrection don’t need no “stinkin” checks and balances or judges either.  Also sounds and smells like Kemper.

The draft bill requires the Corps to begin work immediately — to make the resurrection a fait accompli and to moot opposition.  Kemper tried that too.  Construction started before the plant was designed.  Bad idea.  Not surprisingly the cost ballooned from a projected $1.8 billion to $8 billion.  And the plant wouldn’t run.

The cost of the resurrection is projected at some $250 million.  That is a foot-in-the-door number.  Budgets don’t mean anything.  They are just to get the project started and get the initial appropriation.  They can be revised and supplemented — and usually are.  Don’t be surprised if this project cost four or five times more too.  Like Kemper.  But unlike Kemper taxpayers will pay for its construction cost.  Private property owners and taxpayers will pay for its consequences — which could be much greater.

The resurrection is the modern-day equivalent of blowing the levee on the Mississippi back-in-the-day to put the flood on someone else.  It’s supposed to pump backwater from behind the levee into the river when it’s above flood stage.  That additional water flows downstream and makes flooding worse below Vicksburg.  The Corps and its proponents (who are upstream) say not to worry because it’s not much more water.  It wouldn’t have taken much more to cause a catastrophic levee failure in the flood of 2011.

The Corps next project will be to raise the levees to protect them from the higher river caused by the pumps’ discharge.  The Corps finds or creates problems to solve.   Its solutions create more problems.  And so on.  The resulting problems are just more business for the Corps — but disasters for the flood victims.

The MR&TP is an example.  The Corps has spent billions to speed floods to the bottom of the river — but nothing to increase their discharge to the Gulf.  So the river has risen.  The mean high stage the last 10 years is up 10 feet at Natchez, 8 feet at Vicksburg, and 6 feet at Greenville vs 1940 to 1973 when it started to rise.

The higher river floods more.  About one million acres in Mississippi and Louisiana inside the levees floods almost every year now.  Backwater floods on some 600,000 acres are more frequent because the river backs up into the Yazoo and other tributaries when it’s above flood stage.  It has been above flood stage 8 of the last 10 years at Natchez and Greenville and 7 at Vicksburg vs once every 6 and a half years before 1973.

The Corps built gates at Steel Bayou above the Yazoo River’s mouth to keep the Mississippi from backing up at flood stage.  But it floods anyway when it rains behind the gates.  The Corps wants to pump the rain water into the river.  That means higher floods and longer batture and backwater floods down river.   And probably a catastrophic levee failure in time.

Why not discharge more water to the Gulf instead of holding it in the Mississippi?  The Corps could do this by diverting more of the Mississippi’s flow to the Gulf down the shorter, steeper Atchafalaya River at the Old River Control Complex above Baton Rouge.  That would lower the river and reduce the frequency, height, and duration of floods, and resulting environmental and economic damage.  And levee failure risk. The Corps says it’s waiting on Congress.

Our Senior Senator could probably get Congress to act.  That would be a worthy legacy.