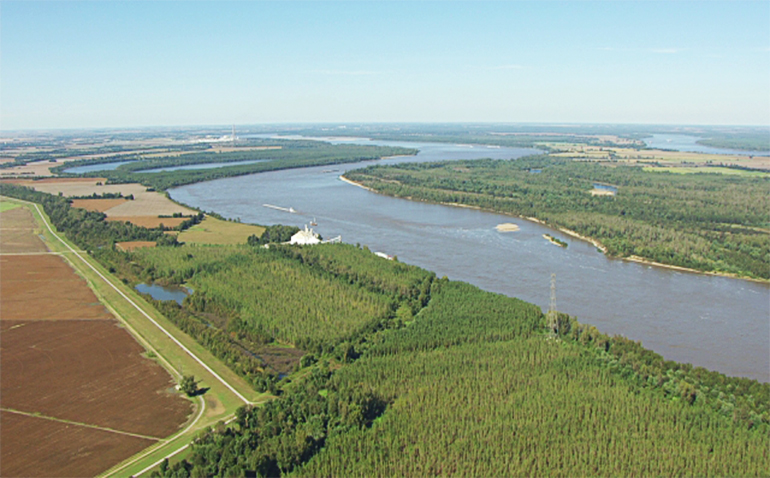 I testified about flooding on the Mississippi before the Mississippi River Commission in Greenville on April 18, 2018.  Readers with properties on the river, its oxbow lakes, and tributaries may be surprised to learn why they flood.  It’s the bottlenecks.

Bottlenecks two hundred miles above New Orleans cause (or rather don’t discharge) floods.  They are results of a US Corps of Engineers plan created in 1928 to control flooding.  But $14 billion spent on it has made flooding worse as confirmed by recently published research results of Woods Hole Oceanographic Institution scientists.

Congress created the MRC in 1879 to improve the river.  It is headquartered in Vicksburg.  Its President is the Commanding General of the Mississippi Valley Division of the Corps. Other members include two generals, an admiral, and three presidential appointees (one vacancy).  The vacancy is due to the recent appointment of a former member as Assistant Secretary of the Army.  He and Mississippi’s senators and their Delta constituents supported the controversial Yazoo Backwater Pumps Project.  It was not funded despite their support.

Several disappointed diehard Forever Pumpers testified. The MRC expressed sympathy and pledged assistance to secure funding for the project.  It’s part of the plan that has made flooding worse and another reason to change the plan.  The pumps would increase flooding in the batture from Vicksburg to New Orleans. It seems farmers who benefit from the pumps have standing with the MRC while farmers and others in the batture who are hurt by the pumps don’t.

MRC members were curious and concerned about issues such as trash at Grenada Lake.  I thought of Parkinson’s Law of Trivialities (trivial issues crowd out serious issues).

However, members were not curious or concerned about the current flood which the MRC President called a “top ten” flood, but a “non-event” — thanks to the Corps plan.  This “non-event” is the third highest flood ever at Natchez, which is just upriver from the bottlenecks.  (Floods are worse just above the bottlenecks.  But the bottleneck effect is moving upriver.)

I thought: Who you gonna believe?  The Corps plan.  Or your lying eyes.  My farm south of Natchez has been flooded two months.  The water is still 10 feet deep. Thousands of acres in the batture are still flooded and will not be planted this year.  It’s not a “non-event.”

Military wisdom says: “No battle plan ever survives contact with the enemy.”  Mike Tyson said: “Everybody’s got plans — until they get hit.”  The point is things change, and plans must too.  The river has changed.  The Corps plan hasn’t.

That’s what my testimony was about.  It started with the Woods Hole study which says it’s flooding more primarily because of flood control.  I’ve been making that case since the record January 2016 flood. It helps when credentialed researchers make it too.  They studied sediment cores and tree growth rings to reconstruct floods 500 year ago. And found it began to flood more in the 1930’s concurrent with flood control efforts.

Flooding now is the worst in 500 years.  Four of the five highest floods ever have happened since 2008.  They are called one-in-a-hundred year floods.  But probably aren’t.  Odds are 325,000:1 against four one-in-a-hundred-year events in 11 years.  They may be the new normal — the result of 90 years of flood control and normal rainfall (average rainfall has not increased significantly since 1940).

There are two bottlenecks.  One is at the Old River Control Complex (ORCC) 200 miles above New Orleans.  Part of the Mississippi is discharged to Atchafalaya River there and thence to the Gulf at Morgan City.  It’s a (political) bottleneck caused by the 1954 Flood Control Act which restricts the discharge.  The flow has increased 172,000 cfs or the equivalent of two Missouri Rivers since the Act was passed.  However, the discharge rate is the same.

The other bottleneck is just below ORCC where the river bed has silted in according to research by Dr. Xu, hydrologist at LSU. This restricts the flow that discharges at New Orleans.

The higher and longer floods threaten levees near ORCC.  A levee break there could cause the river to change course to Morgan City.  That would be a catastrophe for the nation’s commerce, Baton Rouge, and New Orleans.

Greater discharge at ORCC would relieve the bottlenecks.  There is plenty of capacity.  It’s the only place to relieve them.  But the Corps and Congress must first change the plan.

They diddle.  There was no discussion at the hearing about why they diddle.  It’s because they agonize over the consequences of more flow and sediments down the Atchafalaya.  Understandable.  But they won’t admit the obvious: there is no other place to discharge the floods.

So, a million acres of batture and backwater floods almost every year now while the Corps and Congress diddle.  It’s probably just a matter of time before the river relieves the bottlenecks for them and changes course to Morgan City.