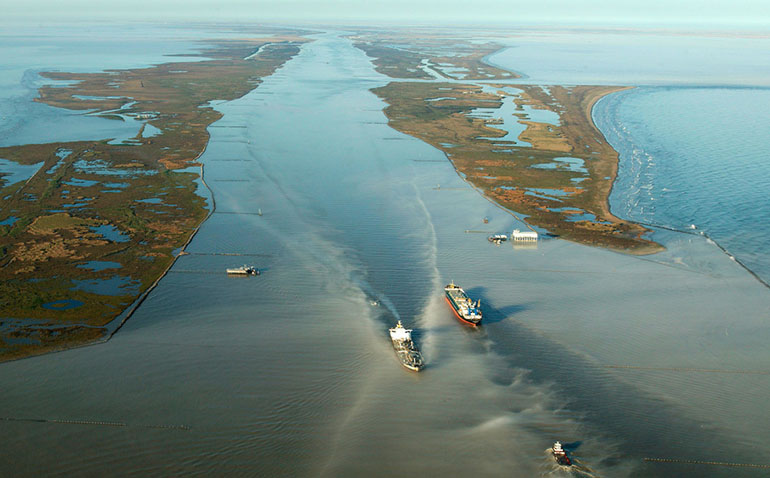 Gravity is a fundamental law of nature.  It makes rivers flow to the sea.  If the natural flow is blocked, there are consequences. The U.S. Army Corps of Engineers blocked about 40% of the Mississippi River’s peak flow to the Gulf at Morgan City in 1964.  The delayed consequences today are unnatural floods on the Lower Mississippi.  Four of the five highest floods ever have happened since 2008 – all higher than the Great Flood of 1927.

The river has been above flood stage at Natchez eight of the last 10 years vs once in the 1950’s.  That’s when Congress enacted the 1954 Flood Control Act.  It caused the Corps to dam up Old River just above Baton Rouge.  It was a natural outlet for the Mississippi’s floods to flow to the Gulf at Morgan City via the Atchafalaya River.

The Corps replaced Old River with what is now called the Old River Control Complex.  It allows only 23% the Mississippi to flow down the shorter steeper Atchafalaya.  The other 77% meanders to the Gulf at New Orleans via the longer flatter main channel. It takes longer to discharge.  The river drops silt, rises, and backs up while it does.

The river started to rise and flood more about 1973.  It got worse over time.  The hundred-year-flood in January 2016 that closed the Mississippi deer season focused attention on the problem.  I started studying and writing about it then.  I testified about it to the Mississippi River Commission (MRC) that spring. And three more times. Mississippi’s Secretary of State testified twice.  Others testified too.  The MRC said not to worry.  It had things under control.  Nothing changed.

The third highest flood ever at Natchez last year and another January flood this year that closed the deer season again focused more attention as the flooding moved upriver to Vicksburg.  Greenville is next.  There have been only three January floods in 90 years.  All have happened since 1990.

There are about 600,000 acres inside the levees and hills bounding the river on the Mississippi side.  There are another 300,000 acres inside the levees on the Louisiana and Arkansas side. This batture land is flooding more as the river rises.  The flooding is worse on the lower river nearer the Old River Control Complex. The Lake Mary batture is only 20 miles above Old River.  It’s ground zero for flooding.  It has about 70,000 acres in Adams and Wilkinson Counties.

It includes some 16th Section tracts. Sixteenth Section lease payments, timber sales, and oil and gas royalties provide funds for Mississippi public schools.  The Mississippi Secretary of State administers 16th Section lands.  On February 11th, he announced that the state is suing the federal government for at least $25 million in flood damages on about 8000 acres of state lands in the batture.  The litigation has been filed in the U.S. Court of Claims in Washington, DC.  It seeks damages under the Fifth Amendment of the U.S. Constitution for uncompensated taking of the state’s lands.

The suit does not seek injunctive relief, and the Court of Claims does not offer such relief.  Old River was dammed up to keep the Mississippi River from changing course down the Atchafalaya and to protect New Orleans and Baton Rouge businesses and U.S. commerce on the river.  This result is worth trillions to the U.S. economy.  But the consequences of decreasing the discharge down Old River were inevitable: a rising river and more frequent, longer, higher floods. The bill for flood damages to innocent landowner bystanders in the batture is now due.

Most of the land in the batture is privately owned. As the Secretary of State noted, some private landowners may also file suits.

The Lake Mary batture has been flooded since late last October.  It’s been above flood stage since early January.  There is a big rise heading downriver.  Looks like another unnatural flood this spring.  Maybe a record.