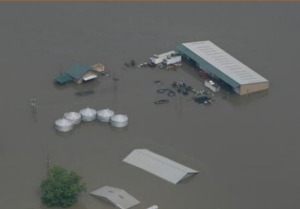 To prime a pump, you give it some water from a bucket to get it started.  To prime a flood next year, you give it some water from this year to get it started.  If other things are equal, the more water you give it, the more likely a flood and the more severe.  That’s happening now.  The Mississippi River has record water this year that could start a flood next year.  It could be worse than 2011 or 2016.  It could

cause billions more damage to Mississippi’s 1.2 million acres that flooded then.

Why Mississippi floods.  The US Army Corps of Engineers tries to protect us from floods.  That’s its job.  That’s why it builds levees – over 3,000 miles since 1928 when Congress put it in charge of floods.  That’s why it straightened and shortened the river by 151 miles with 16 cutoffs between Memphis and just south of Natchez.  The idea was to speed the flow to the Gulf.  It works.  Except when the flow gets to the Gulf, it can’t get out fast enough.  So the river backs up and floods Mississippi.

When this happens, the river also tries to flood Baton Rouge and New Orleans.  So the Corps built emergency spillways to protect them: the Bonnet Carre’ and the Morganza.  They saved New Orleans and Baton Rouge in 2011.  It was the first time both had been opened since 1973 when they saved the Old River Control Structure.  But they didn’t help Mississippi much.  They were not designed to.

Some 1.2 million acres of Mississippi floods.  High levees are part of the cause. The higher  they are, the higher the floods and the greater the batture and backwater flooding.  The batture is the land between the river and the levees or natural hills that bound it.  There are about 600,000 acres of batture in Mississippi.  The backwaters are the land along the Yazoo River and other tributaries that drain into the Mississippi when it’s low.  They don’t drain when it’s is high though.  There are about 600,000 acres of backwater flood land in Mississippi.

So what could reduce Mississippi’s batture and backwater floods?  It’s simple: send more flow down the Atchafalaya at Old River. The Corps controls this.  It limits the flow to 30% because it thought it had to.  It appears it misread its orders.  It is now running computer models to simulate the effects of increasing the flow to 40% and to 50%.  Among other things it wants to see how much more flow Morgan City can handle.

You might ask why not just gradually increase the flow to actually see when Morgan City has a problem?  It has plenty of freeboard now.  The river and its flow are naturally low in the fall.  Great time to run a real test.

How does this work?  Let’s look at 67 years of flood history starting in 1950 after the river had  stabilized following the last cutoff in 1942.  There is a strong correlation between the low water level or stage in the current year and the high water stage the following year.  The low stage is a good predictor of coming floods.  This makes sense.  The lower the river in the fall, the more water it takes to cause a flood the following winter and spring.  The higher the river, the less it takes.  A high river in the fall primes a flood.

The low stages started to rise in 1972.  Floods increased.  Previously the low stage had been above 10 feet (10.1 feet) only once in 23 years.  But it jumped to 13 feet in 1972.  The following year the great flood of 1973 occurred.  The Mississippi River almost overwhelmed the Old River Control Structure and changed course to take the Atchafalaya route to the Gulf.  It was a near thing.  The Bonnet Carre’ and the Morganza were opened to save it.

Time’s running out.  The river is primed for another major flood.  It has a record 16 foot head start.  But there is still time to reduce this – and the odds of a major flood.  How?