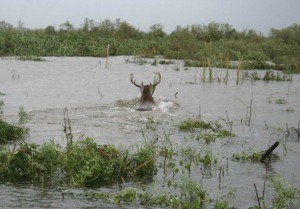 In 1946, the Southern Authors Literary Guild chose “Speeding Floods to the Sea” as the most outstanding book of the fall.  Pretty racy stuff.  A book about cut offs – on the Mississippi River. The author W.E. Elam lived in Greenville which was known for its writers. He was not a writer though.  He was an engineer.  But not just any engineer.  He

was the Chief Engineer of the Mississippi Levee District and a respected authority on floods. Floods were a big deal in Mississippi then. They had a big effect on its farm based economy. So Elam wrote the book about how to prevent  or moderate them.

It’s pretty simple: just speed the floods to the sea. The idea is to straighten and shorten the river by cut offs.  The faded paper jacket on the book shows the river’s meandering Greenville Bends. They looked like a winding country road with a super highway cut off going straight through.  Cut offs shortened the river about 150 miles.  They sped up its flow and cut a steeper slope and deeper bed in many places.  So the river carried more water at lower levels (stages).

Cut offs were a controversial part of the Corps of Engineers’ Mississippi Rivers and Tributaries Project authorized by congress after the great flood of 1927. The project was changed many times in response to shifting political alliances and pressures. The outcome was usually less flooding for somebody and more flooding for somebody else.  Back in the day Mississippi’s politicians held their own in flood trading.  Mississippi didn’t flood so much then.  Now it floods a lot.

Half done. Elam’s book documented that cut offs worked. But cut offs were just half the solution. The other half was to get the floods to the sea. The other half got lost in the political flood trading. So the floods now speed to Mississippi, not the sea.  And the water stays in Mississippi’s batture between the river bank and the levees and hills for months now.  Over 75,000 acres south of Natchez has been flooded since last December.

The missing rest of the story is the outlet to the sea. It was supposed to be a channel running south west across Louisiana between Natchez and Baton Rouge and discharging near Morgan City – roughly where the Morganza floodway is now. It would increase the river’s discharge to take the increased flow from the cut offs. It didn’t happen. So the faster greater flow now backs up in Mississippi.

Ground Hog Day. The Corps raised the levees to contain the increased flow that can’t get out to the sea. It has built a bigger next flood disaster. The higher the levees, the higher the floods, and the greater the destruction when a levee breaks.  We never learn.  We seem caught in a Ground Hog Day time warp. The history of the river has been bigger and higher levees and bigger and more destructive floods.

When the levee broke at Mounds Landing north of Greenville in 1927, it flooded over a million acres 10 feet deep in a matter of days.  Levees are higher now. Upriver development and runoff is greater now.  The river is shorter and the flow is faster now.  But it can’t get out.  Something’s got to give.  When one of the higher levees fails, there will be an even greater flood disaster.

Such a disaster could result from the recently completed $13 billion hurricane risk reduction project at New Orleans.  This is supposed to protect against storm water surges from the sea.  It includes stronger levees on the Mississippi as it meanders through New Orleans.  It also includes capacity to pump more water from the city’s low lying areas into the river. The river is already maxed out and can’t discharge floods coming downstream now.

Stepped over a snake twice. The city almost flooded in 2011 and 2016.  Opening the Bonnet Carret’ spillway saved it.  The hurricane risk reduction project may actually increase river flood risk. It constricts the river and increases its load. New Orleans could flood despite the $13 billion project if a hurricane hits when the river is high.

And the river is high a lot now. It stays high much of the year. Two one-hundred year floods in five years. The next flood comes before the last flood drains. Why?  Because the only way more flow can get to the sea now (down the Atchafalaya via the Old River channel north of Baton Rouge) is limited by law. This 1964 law caps the flow down the Atchafalaya at a max of 30% of the main channel’s flow. The Atchafalaya is the shortest and most direct route to the sea. It can handle more flow.

A twofer. Increasing the flow year round (not just when floods threaten) would lower the water level in the main channel.  This would reduce flood risk at New Orleans. This would also reduce batture and backwater flooding.  Such flooding in Louisiana is not much of a problem because there’s not much land in the batture from the Mississippi line to New Orleans.  And the river there receives just 70% of the upstream flow. There are 550,000 acres of batture upriver in Mississippi, however, which get 100% of the flow.  Its flooding is a big problem.  It impairs property values, limits farming and timber and oil and gas operations, prevents hunting and other recreational activities, and reduces related business and tax revenues.

So Louisiana politicians don’t care much about  batture flooding on the Mississippi. They do care about flooding New Orleans though.  Mississippi’s politicians are learning about the problem and cost of Batture flooding and associated backwater flooding – which impacts another million acres.  Sending more flow down the Atchafalaya could moderate flooding both places.

What if Mississippi’s politicians got fired up and got back in the flood trading game?  And worked a deal to speed the floods to the sea – all the way to the sea? 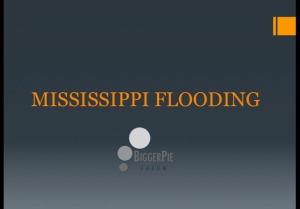