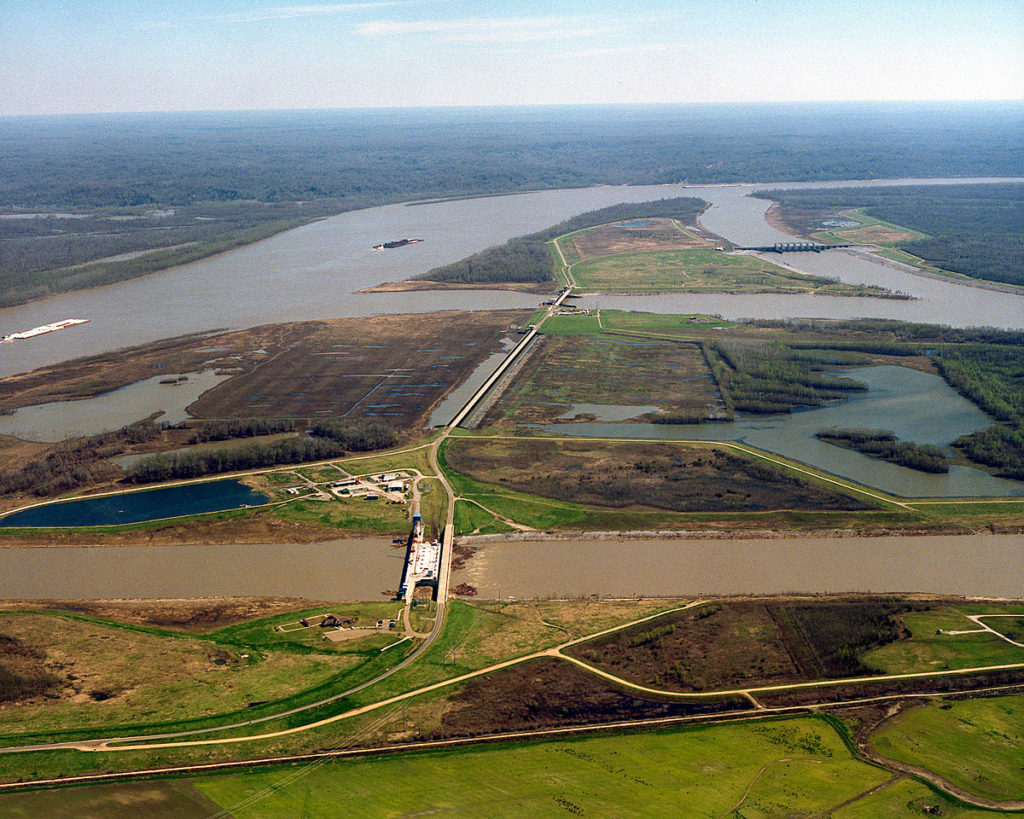 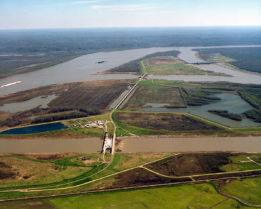 My son George said: “I hate to tell you, Dad, but we have a failure to communicate.”  (As the warden said to Cool Hand Luke.)  A friend told him at a recent fundraiser: “I see your Dad is still trying to change Mother Nature.”  No, I’m not.  I know better.  But I am still writing about flooding on the lower Mississippi River.

Because I want the US Army Corps of Engineers to do its job.  It”s supposed to prevent and relieve floods.  It’s not doing it.  It’s making floods worse.  It’s not listening to Mother Nature and obeying her laws.

Her most recent message is this year’s summer flood from Greenville to Baton Rouge.   It has delayed planting for many farmers and will prevent some from planting at all this year.   It was caused by rainfall in the Ohio River basin in April that flowed down to flood Mississippi and Louisiana in May and June while it slowly drained to the Gulf.

The lower Mississippi has been above flood stage eight of the last ten years at Natchez — 80% of the time vs only 9% from 1950 through 1972.  Why is it flooding more?  It’s the Corps, not Mother Nature.

Gravity is one of Mother Nature’s laws.  It makes water run downhill.  Duh!  The Corps understands this.  It has contained, channeled, straightened, shortened, and steepened the river with levees, cutoffs, weirs, dikes, and other structures — to speed floods to the Gulf.

It has sped floods to the bottom of the river.  But not to the Gulf.  It didn’t finish the job.  It didn’t provide enough outlets to the Gulf.  So the water that can’t get to the Gulf floods the low lying batture in Mississippi and Louisiana every year and the higher ground eight out of ten years.

The lower Mississippi River has been steadily rising since 1973.  The trend line is five feet higher at Baton Rouge and 10 feet higher at Natchez.  Floods have increased as the river has risen. That makes sense. The higher river gives floods a head start.

Or is Mother Nature saying: “Don’t push your luck.”

More rain is not causing the floods.  Total annual rainfall in the Mississippi drainage basin has increased very little.  The trend line is virtually flat.  But the rain (and snow) runs off faster due to ever more development in the basin.  And it flows downriver faster due to Corps projects to shorten, straighten, and channel the river — all in the name of preventing floods.

But the water doesn’t discharge to the Gulf faster.  So it backs up and floods while it slowly drains.  And the river rises.

As a result, normal rains cause batture floods every year.  Heavy rains cause frequent major floods and backwater floods.  Heavier rains cause 100 year floods — at five year intervals.   Epic rains may cause levee failures.  Note, no levees failed in 2011, but 1.2 million acres flooded in Mississippi anyway.

Mother Nature is saying: “Let the water out to the Gulf.  Or I will do it for you.”

Of course, the Corps knew it needed to get the water to the Gulf.  In the 1930’s it tried to divert some of the Mississippi’s flow to proposed floodways across from Greenville and discharge it to the Gulf via the Red River.   But there were not-in-my-backyard political problems.  So the floodways weren’t built.

Thus, there are still only two outlets to the Gulf.  And the Corps doesn’t use the best outlet to relieve floods.

That’s the outlet at Morgan City/Wax Lake, Louisiana, via the Atchafalaya River.  Part of the Mississippi diverts at the Old River Control Complex (ORCC) above Baton Rouge to flow down the Atchafalaya.  The Corps operates the ORCC to control the diversion.  But not to relieve floods.

The Corps limits the diversion to 23% of the Mississippi’s flow.  It uses about 22% of the ORCC’s nominal capacity (12% of maximum capacity) on average.  The Corps limits the diversion to maintain a 70-30 split of the total flows of the Mississippi and the Atchafalaya to the Gulf.  Why?  Because that was the split in 1950.  Congress thought it was a good idea then.  It’s not now.  But there are 67 years of inertia and I-like-it-the-way-it-is opposition to change.

So the other 77% of the Mississippi’s flow meanders 335 miles from the ORCC down the main channel and slowly discharges at New Orleans.  It’s a bottleneck that causes the river to rise all the way to Greenville.

Mother Nature likes the Atchafalaya route to the Gulf.  It’s short (142 miles) and steep and swift.  She has used it before to speed floods to the Gulf.  She may use it again if the Corps doesn’t.

The Corps has lost sight of its mission.  It’s supposed to prevent and relieve floods.  It’s not doing it.  It is flooding thousands of acres in Louisiana and Mississippi every year.   It hasn’t asked those property owners for permission.  We don’t want floods in our backyards either.  Or unaffordable premiums for flood insurance.

We just want the Corps to do its job and speed the floods — all the way to the Gulf.