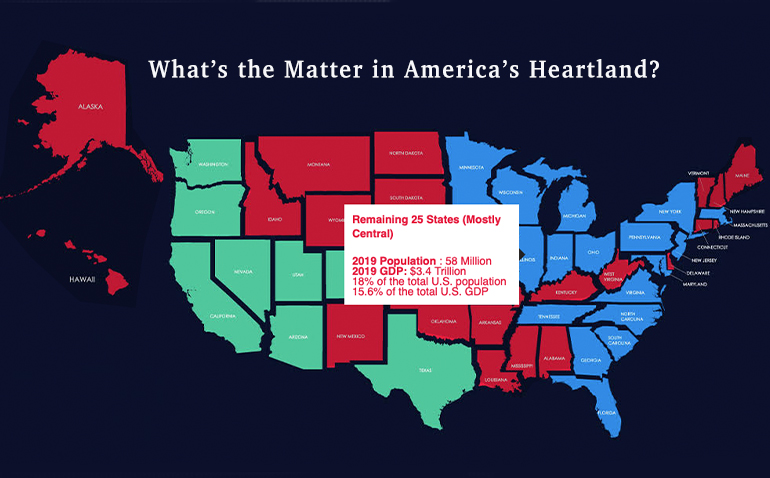 What’s the Matter in America’s Heartland?

The Atlantic/Southeast, however, connects even more closely with the Great Lakes/Northeast region (blue region on map) than with Texas (green), the Pacific Southwest (green) or the 25 slow growth central states (red).  There is no physical separation between Great Lakes/Northeast and the Atlantic/Southeast where they merge around Washington D.C. Population and GDP growth spreading southward from the Great Lakes/Northeast region remain concentrated along the Atlantic coast interconnecting people and economic growth in the Chicago-NYC-Boston-Philly-DC megaplex and 2nd fastest grower, Florida.  In the middle of the Atlantic coast, Georgia and North Carolina have the 4th and 5th largest state population increases and the 5th and 6th biggest state GDP growth increments.  Virginia growth is close behind and Tennessee and South Carolina are in the top 15 growers.  This 17 state region along the Great Lakes east to the Atlantic then south to Florida is an interconnected economic powerhouse with 51.4% of 2019 U.S. GDP and 52% of the 2019 U.S. population.  What can trigger a stronger pull on the people and economic growth from the Atlantic coast westward to Mississippi?

Texas is in a class by itself for GDP and population growth over the past 50 years.  Both rates will likely slow.  Texas’ growth is not yet spreading to adjacent states such as is happening for the regions adjacent to California or as has been underway down the Atlantic seaboard from the long established Great Lakes/Northeast region.  Texas accounts for a little under 9% of 2019 U.S. GDP and population.

Spreading of people and investment from California began a few decades ago and is accelerating.  The process is beginning from Washington state and suggests an even larger regional powerhouse over coming decades from Canada to Mexico and east to Colorado.  Water and climate could be the Achille’s heel of southern California and the southwestern states.  The Pacific/Southwest region accounted for  22% of 2019 U.S. population and 25% of 2019 GDP.  Average GDP per person is high for such a large region and population.

The remaining 25 mainly central states (red) participated in neither population nor economic growth near the national average for the past 50 years.  The GDP and population of these states collectively declined as a percentage of total U.S. figures.  (The Great Lakes/Northeast was below the national population growth rate, it was above nation averages for GDP and personal income growth.)  This largely contiguous group of states lagged the perimeter of the country.  After such a long stretch of subpar performance, the region might ask if they are being held back or are they holding themselves back.  The group of states accounted for 18% of 2019 U.S. population and under 16% of GDP, declining over 50 years and currently.

Scroll over the map to see U.S. Regions Measured by Population and GDP for 2019