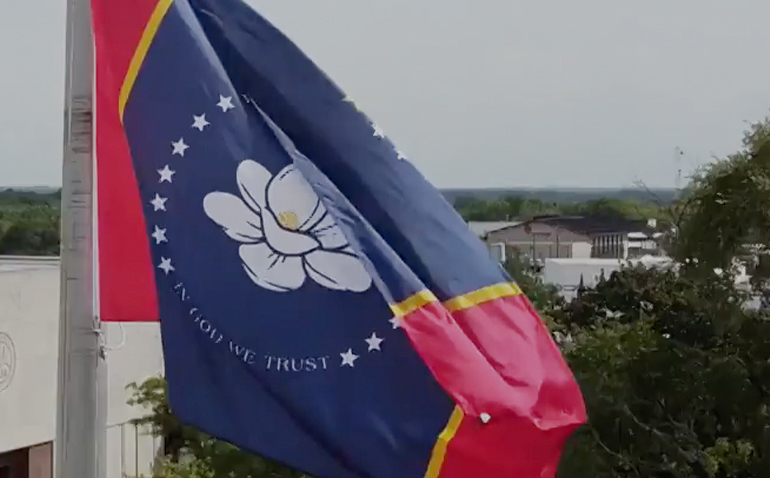 What Does the Flag Vote Mean?

The Mississippi Constitution has no provision for allowing voters to decide any public policy matter except amendments to the state Constitution.  Our form of government being a republic, the Constitution places on elected representatives the responsibility to decide matters of the state.  There is no “right” for voters to vote on such matters.

Yet, twice the legislature has asked voters for their opinion by use of an election ballot.  Both times, in 2001 and now in 2020, the question has been on the design of the state flag.

Now that the state flag commission has chosen a design for the new banner, registered voters will have the chance to decide whether to approve the new design.

If voters approve it, the legislature will have to pass a bill to affirm that choice.  If voters reject the design, the flag commission will reconvene and choose another one.

At least that is the process established in the bill that retired the former flag and set up the commission to pick a new one.  The legislature could pass a bill to change that process. Theoretically, that could include their picking a new flag without putting it to the voters, but that is highly unlikely.  In the meantime, Mississippi has no state flag.

The 2001 vote on the flag was unusual, not only because it posed a question to voters on a legislative matter, but also because it was held as a special election in the middle of April, not at a general election or even concurrent with municipal elections that were held only a few weeks later.  That unusual date likely had an effect on who turned out to vote.

The vote this year will also be a special election, but it will occur at the same time as the general election that will include votes for President, U.S. House and Senate seats, various judges, and two Constitutional amendments, including one on medical marijuana that is on the ballot through an initiative.  The turnout will likely be high (no pun intended) and include many voters who were not old enough to vote in 2001.

So what will the flag vote mean?  Technically, it will be no more than an expression of opinion on a specific legislative action.  It will not enact any law or establish the new state flag. The legislature will still have to do that, whether that is for the flag commission’s current design, if a majority of voters favor that one, or a new design at a special election at some point in the future.

But as a practical matter, this year’s vote will continue an emotional debate.  Some Mississippians are angry that the flag was changed at all, and some are angry that it was changed without their voting on it, including some who see that as a violation of their “right” to vote on the flag.

Those opponents could take out their anger at the ballot box three years from now when the governor, lieutenant governor and all state legislative seats will be on the ballot.  Some are trying to put the old flag on the ballot through an initiative, which would put it in the Constitution if successful.  Some are lighting up social media to express their scorn.

Others are quite happy that the flag is being changed, and they will vote for the one on the ballot even if they aren’t particularly fond of the design itself.  Some of those supporters see the change as a chance to move Mississippi forward, whether they see the old flag as racist or not, and some are just tired of dealing with the issue and don’t really care what the flag looks like.

It’s hard to tell at this point whether the opponents are a very vocal minority or whether their opinion represents a majority of Mississippians.  We will find out on November 3.