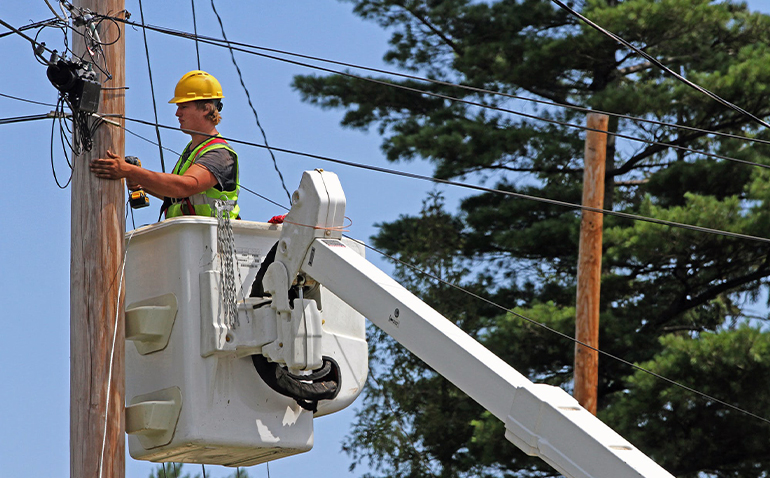 The Mississippi Legislature could be allowing the state’s two investor-owned utilities to get into the broadband business in a way that might serve both broadband customers and electricity ratepayers.

House Bill 942, which was authored by state Rep. Scott Bounds, R-Philadelphia, would allow Entergy and Mississippi Power Company to use their power delivery infrastructure to get broadband service to unserved or underserved areas.

The bill says that if a utility allows use of its fiber-optic infrastructure or enhanced grid to one broadband provider, it must allow other providers to use the infrastructure as well on a non-discriminatory basis.

The two utilities would be prohibited from allowing any use of its grid to diminish the reliability of its electricity delivery and ratepayers would not be forced to buy broadband services from the provider using the utility’s infrastructure. Also, a ratepayer whose broadband bill goes overdue will not have their electricity shut down for non-payment.

Similar protections were incorporated into legislation passed last year that allows non-profit electric power associations to partner with a broadband provider to extend broadband service to their customers.

In addition, utilities and the electric power associations around the state would be allowed to grant permission to a customer who uses more than 20 megawatts of electricity to construct, install and maintain fiber optic cable on the utility’s existing right of way.

Utilities could charge ratepayers for right-of-way acquisition through rate hikes, but all revenue generated by an arrangement with a broadband provider would have to be credited back to customers.

Such arrangements would not be unprecedented but have already been done in some test projects statewide.

Entergy and C Spire have already completed an $11 million fiber project that spans 300 miles and connects 15 counties. C Spire is already working on a similar arrangement in Alabama with Alabama Power, Mississippi Power’s sister subsidiary in the Southern Company.

Using existing right-of-way makes sense as providers try to bridge the digital divide in Mississippi. The COVID-19 pandemic and the growth of virtual schooling and telehealth services increase the importance of ensuring that more Mississippians have access to broadband.

The biggest cost to ensure that rural areas are connected is the initial cost of laying the fiber cable and anything that reduces that will be a net positive for consumers.

Protections for ratepayers with requirements that allow broadband providers to use electricity delivery infrastructure while not diminishing the grid’s reliability need to be vigorously enforced by the Public Service Commission.

On February 9, 2021, the bill passed the House.  The bill will allow electric utilities to lease their fiber to broadband providers in unserved or underserved areas.  This has been contentious in the past, primarily because current broadband providers rightly objected to allowing electric utilities to get into the broadband business with fiber that had been paid for by ratepayers, thus creating an unfair subsidy.

There were a few changes from earlier versions.  First, it says they can’t offer broadband themselves, they can only lease their fiber to others, and it says if they offer it to any broadband company, they have to offer it to all such companies.

It also says they have to rebate to their customers whatever revenue they earn from leasing their fiber, so their already-paid-for fiber won’t give them a subsidized advantage over other companies.  It says they can’t condition any of their electric service on whether the customer buys service from the broadband company that is using their fiber.

It also says they have to rebate to their customers whatever revenue they earn from leasing their fiber, so their already-paid-for fiber won’t give them a subsidized advantage over other companies. It says they can’t condition any of their electric service on whether the customer buys service from the broadband company that is using their fiber.

The bill also gives the PSC the authority to contract with federal or state agencies, including universities, to create maps of broadband access in the state. This is because the FCC maps of “unserved” and “underserved” areas are notoriously inaccurate.

The bill says the utilities don’t have to pay extra easement compensation to landowners for access to their property if the company has  already paid for an easement for other lines, equipment, etc.