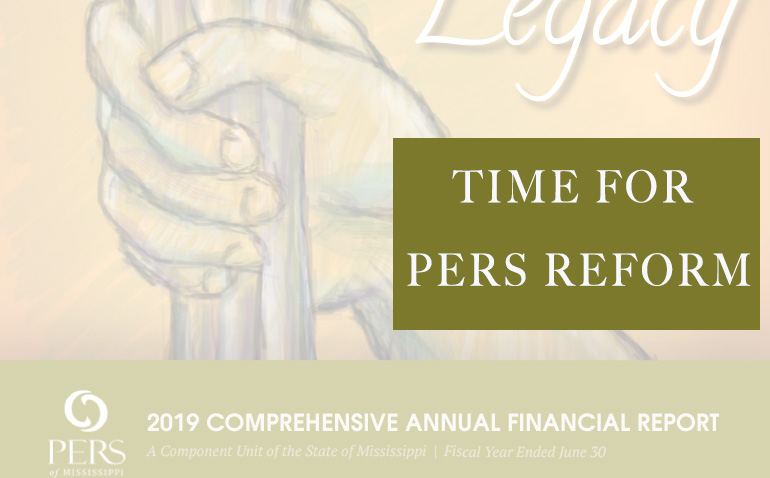 The Public Employees’ Retirement System of Mississippi — which serves most state, county and municipal employees — now has an unfunded liability of more than $17.6 billion as of June 30, 2019.  Last year, it was $16.9 billion.

An important metric to use in evaluating PERS is the plan’s funding ratio which relates the fund’s liabilities to its assets.  During FY 2019, the ratio shrank from 61.8 percent in 2018 to 60.9 percent.  If this was the dipstick in your car’s engine, it would be indicating the need for a change.

Another metric to use for PERS is how much of the state’s tax revenue it would take to cover the unfunded liability.  The general fund tax revenue for the entire proposed state budget for fiscal year 2021 is $5.85 billion, so it would take 3 years of all the state’s general fund to make whole that liability.  That is a no-go of course, as it leaves no money for all other general fund services but it provides much needed context.  In short, PERS is the elephant in the state capitol that elected officials don’t want to talk about.

It would seem the stock market’s hot streak over the last few years would have boosted PERS’ returns enough to make a big dent in the plan’s unfunded liabilities.  Alas, this is not the case.  In fiscal year 2019 (June 30th), PERS earned $1.701 billion or a 6.64 percent rate of return on the plan’s investments, after earning $2.385 billion or a 9.48 percent rate of return in 2018.  The plan expects an annual rate of return of 7.75 percent, so this year’s returns marked the first time in three years that investment returns were not above the plan’s expectations.  Many organizations, who focus on this issue nationally, like ALEC and Reason, have advised states to reduce the annual rate of return assumption to something more conservative than 7.75 percent.

ALEC and Reason are not alone in saying return expectations are too high in the current super-low interest rate environment.  Warren Buffett, world famous investor and head of Berkshire Hathaway, has echoed that same refrain to reduce return expectations.  Another world famous investor, Bill Gross, founder of PIMCO and noted bond guru had this to say in the January 2nd Wall Street Journal, “But artificially low interest rates destroy the savings function so necessary for capital to be invested in the real economy.  Pension funds, insurance companies and any financed-based structure with long liabilities are slowly being strangled because they cannot earn their assumed return.  The same goes for mom and pop savers, as they struggle to earn for retirement.”  PERS is a good example of a “financial-based structure with long liabilities” referenced by Bill Gross.

There are two structural impediments to success at PERS today.  One is the requirement to invest a significant percent of the portfolio in investment grade bonds at a time where the 10-year Treasury note is trading below 2 percent.  This makes the 7.75 percent assumed return very difficult to achieve as Mr. Buffet and Mr. Gross have suggested.

The second impediment is the generous COLA (Cost Of Living Adjustment) paid to retirees once they reach age 65.  Currently, the 3 percent COLA (compounded annually) is out of line with an inflation environment that warrants a 10-year Treasury note below 2 percent.  In short, retirees are getting paid a COLA beyond the means of current workers and their employers to fund.

A cost of living adjustment should be related to the real world inflation rate.  Mississippi PERS’ COLA at 3 percent is not.  In 2005, the plan’s COLA payout to retirees was $211 million or about 18.9 percent of total benefits paid out.  This year, it grew to almost $700 million, an increase of 7.6 percent from 2018 ($650 million).  The COLA payouts are now 25.4 percent of all benefits paid to retirees.  Unless adjusted, the total dollars and percent of benefits of the COLA will grow as a percentage of the total payout and continue to “slowly strangle” the health and stability of PERS.