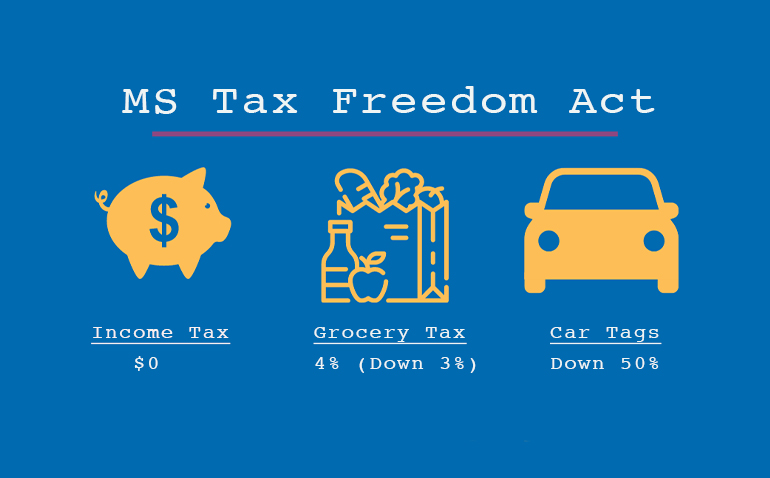 The Mississippi House of Representatives has passed a bill that could eliminate the state’s personal income tax.

House Bill 531, also known as the Mississippi Tax Freedom Act of 2022, was authored by House Speaker Philip Gunn, R-Clinton.  The bill would eliminate the state’s personal income tax, but also would cut some other taxes as well in addition to increasing the state’s sales tax.

This answers some critics of last year’s House-passed bill who say that retirees, whose retirement income isn’t taxable, wouldn’t have received tax relief under that plan.

The other tax cuts include a reduction in the state’s tax on groceries from 7 percent to 4 percent and a reduction in the cost of car tags by 50 percent.  The “cost of a car tag” is actually the property tax assessed on automobiles by counties.  The House bill would require counties to cut their “car tag” collections in half, with the state reimbursing them for the resulting loss of revenue.

To compensate for the loss in state revenue, the state’s sales tax would increase from 7 percent to 8.5 percent.

According to numbers from the Legislative Budget Office, sales taxes (including use taxes) generated $2.65 billion in fiscal 2021 (which ended on June 30), up 6 percent from the year before ($2.5 billion).

Eliminating the state’s income tax is expected to give Mississippi a competitive advantage over our neighboring states, which, with the exception of Tennessee, impose an income tax.   It is also an attempt to attract more people to the state and grow the economy, as has been seen in the nine states that have no income tax.