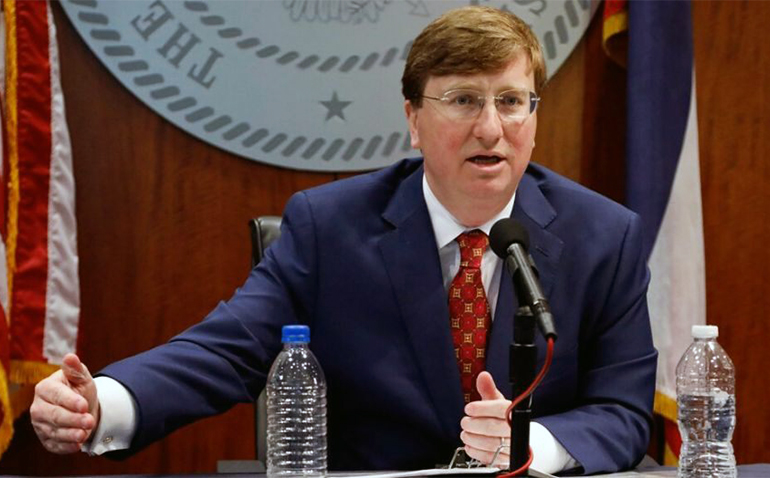 Gov. Tate Reeves received a mediocre grade in an American Legislative Exchange Council (ALEC) scorecard ranking the nation’s governors on economic policy performance and results during and before the COVID-19 pandemic despite being in office less than a year.

Two key factors that lowered his score are the state’s overall debt picture (the biggest chunk of which is $17.6 billion in unfunded pension liability) and the number of Mississippians dependent on government assistance.

The scorecard, by the non-partisan ALEC, utilized 20 different economic factors to grade governors on their performance in office.  Reeves was ranked 29th overall among the nation’s 50 governors, receiving a 41st ranking on results and a 15th-best ranking on policy.

Reeves is one of two governors with a tenure in office of a year or less, along with Kentucky Gov. Andy Beashear, a Democrat who ranked 32nd.

Arduin said in a conference call with media that Mississippi could fall behind other states regionally, such as Tennessee, Florida and Texas, because of its tax policy.  All three of those states have no state income tax, while Mississippi has a top marginal rate of 5 percent, the same as Alabama and lower than Louisiana (6 percent) and Arkansas (6.6 percent).

The southeastern U.S. has become a very competitive neighborhood.  Gov. Bill Lee of Tennessee (7th overall) and even Gov. Kay Ivey of Alabama (17th overall) ranked much higher than Reeves, with Gov. Asa Hutchison of Arkansas seven spots above Mississippi’s first-term governor.  All three are Republicans.

Only Gov. John Bel Edwards of Louisiana, a Democrat, scored lower than Reeves regionally, coming in at 47th.

Williams said mentioned the state’s liability system as a long-term damper on the state’s economy, despite reforms passed during then-Gov. Haley Barbour’s administration.

The most recent U.S. Chamber of Commerce scorecard ranked Mississippi 44th worst in its annual survey of the fairness and reasonableness of state liability systems.

Reeves received a 24th-best ranking on tax policy, which is a measure of substantial tax legislation either proposed or enacted over the last two fiscal years.  As lieutenant governor in 2016, Reeves spearheaded an effort to phase out the state’s corporate franchise tax that levies an assessment on both investment and capital formation.  The tax was assessed on each $2.50 per $1,000 of capital value.  That rate will decline by 25 cents each year until 2028, which will be complete.  The rate is now $2 per $1,000 of capital value.

He received a 12th-best ranking on spending, which the scorecard analyzed each governor’s budget for fiscal year 2021 and, if possible, fiscal 2020 as well.

The scorecard ranked Reeves 28th on CARES Act policy, which measured governors on the severity of their lockdown policies and assessments of the rankings of cases per million, deaths per million and the unemployment increases.

The governor scored 20th on welfare policy, which is a measure of total welfare spending, Medicaid enrollees per 10,000 population and the costs of Medicaid expansion, which Reeves opposes.

It should also be noted that Speaker Philip Gunn is on the ALEC board of directors.