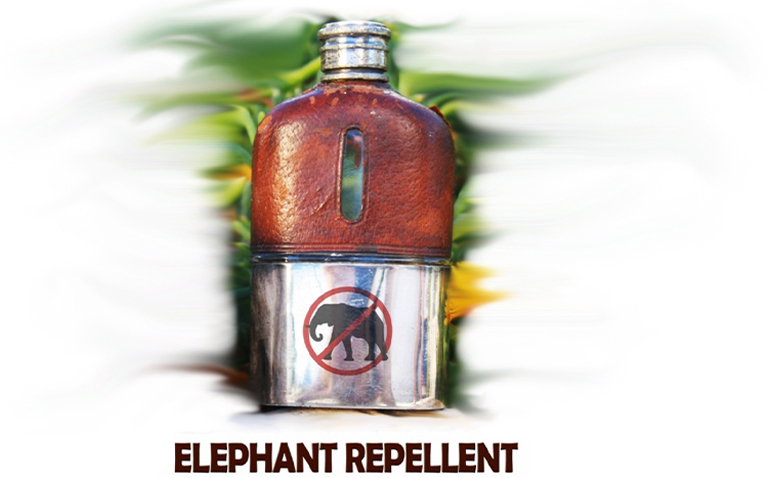 Repellants keep elephants away.  Crosses repel vampires.  Government ordered social distancing reduces Covid-19 infections and deaths.  See how well it works.  It reduced deaths from 2.2 million to around 60,000 in the U.S.  Just like repellants reduced the number of elephants in my garden to zero.

We don’t know how many deaths there would have been without social distancing.  Experts said a lot.  But now there aren’t enough.  So to keep experts from looking bad, death with Covid-19 and other morbidities becomes death from (caused by) Covid-19.  See how well government ordered economic suicide works.  And how well surrender of fundamental freedoms and rights to worship and assemble works.  Who would have thought we would fall for the elephant repellant scam?

Who remembers that Jews had to wear a yellow Star of David in Germany in 1939?  Who would have thought shoppers in Montana would have to wear pink wrist bands today?  Or police would ticket worshipers in their cars in a church parking lot in Greenville for disrespecting social distancing?  Or an Idaho mom would be arrested and cuffed for taking her daughter to the park?  Or Nextdoor Jackson would turn neighbors into snitches to signal their social distancing virtues?

How do mathematical models and experts and media syncopates streaming 24-hour digital propaganda cause ordinary people to lose their common sense — and cede their independence?  It’s impossible to explain since the experts and their models are so obviously wrong.  Yes, Chico Marx, we believe experts — not our lying eyes.  It’s madness.

It began with the World Health Organization’s fire-in-a-theater shout of a 3.4% case death rate from the virus.  Then, the expert Doctors Fauci and Birx speaking for bureaucrats at the CDC, the FDA and other U.S. alphabet agencies told the President that 2.2 million Americans would die from the virus and hospitals would be overwhelmed at the epidemic’s peak — which they could predict.

They said we could flatten the peak by social distancing (i.e., shutting down much of the economy).  The number of deaths from the epidemic would be the same, but it would take longer.  That’s OK.  In fact, that’s the point because then hospitals wouldn’t run out of ventilators.

The number of increased deaths due to suicide, depression, alcohol and drug abuse, domestic violence, etc. from the loss of jobs and economic stress and hardship, and deferred “elective surgeries and non-emergency treatments” of cancer, heart disease and other health issues were apparently not estimated or modeled.  Why?  Maybe because they didn’t fit the narrative.

Most Governors and others with authority to modify the President’s one-size-fits-all remedy for the country to fit their states didn’t do so.  Why?  Maybe there’s political safety running with the herd.  Maybe some like the governor who blocked the sale of vegetable seeds are just natural born tyrants.  A few leaders did believe their lying eyes, however.  They relied on their citizens’ common sense to mitigate damage from the virus, maintain their economies and keep their individual rights and liberties.

Let’s keep our eyes on South Dakota, Arkansas, Oklahoma and Sweden.  They broke from the herd.  Let’s compare their per capita deaths from the virus and from all causes with history and changes in their per capita incomes, unemployment, GDP and other economic measures with those who ran with the herd as the epidemic plays out.

One early indicator of the cost of running with the herd may be more suicides.  They are the second leading cause of deaths for ages 25-34 in the U.S after accidents.  Covid-19 deaths are rare in that age group.  It wouldn’t be a surprise if increased suicides kill more young adults than the virus.

It’s becoming obvious as the epidemic plays out that experts and politicians don’t control it.  Mother Nature does.  Experts can’t predict it either.  They said they knew where we were on the epidemic curve, could test for and plot new infections to predict its peak and delay it.  They were wrong on all counts.  We know now that the virus genie was already out of the bottle and spreading — without doomsday consequences.

Widespread antibody testing, which indicates prior infections, shows that the virus has been around longer than experts thought.  It has infected millions vs thousands of new cases that experts are tracking to predict the curve and that doomsayers are hyping.

That’s good news for most of us.  And bad news for experts and doomsayers.  The virus is more infectious, less deadly for most and more deadly for some than they thought.  It is also more subtle or sneaky.  These characteristics explain why the models were wrong and suggest how to speed economic recovery.

The virus infects most without causing discomfort or symptoms.  It spreads quickly without detection.  Its case death rate is trending toward 1-2 per thousand as case counts increase due to antibody testing.  That’s similar to the flu.  But it’s more deadly for those over 65 with other health issues (e.g., obesity, diabetes, heart conditions, weakened immune systems, respiratory impairments).  And it’s concentrated in some locations like New York City, the nation’s infection and death hot spot.

NYC has 1,437 recorded deaths per million population vs 74 here and 11 in South Dakota.  It’s less than 3% of the U.S. population, but accounts for 22% of all Covid-19 deaths.  It’s different.  Elephant repellants don’t work there.  Why?  Maybe because of its crowded extensive rapid transit system, dense urban population clusters and international travelers.

There are some actual and potential hot spots in Mississippi too such as nursing homes and elderly population clusters where there may be elephants.  But most of Mississippi doesn’t need elephant repellants and can get on with life as it was before Covid-19.  Let’s do it.