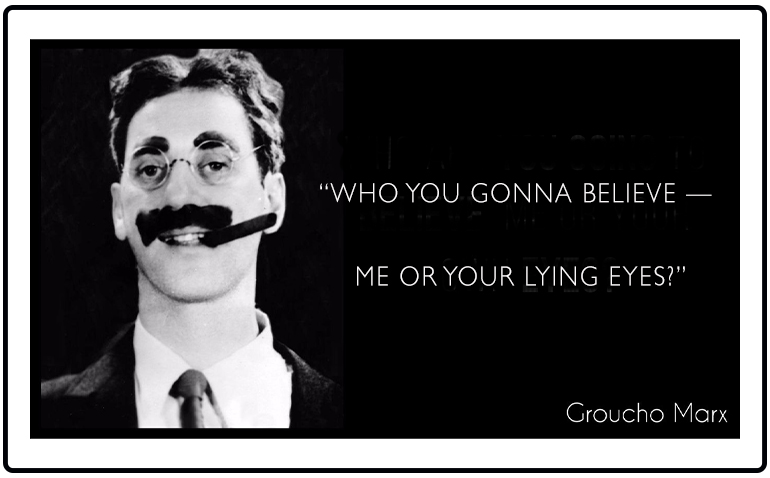 Groucho Marx, when caught in a compromised condition, retorted: “Who you gonna believe —  me or your lying eyes?” Although Chico may have actually said it first, it’s attributed to Groucho. And that has become the popular narrative. So it’s become the truth. Kind of like “deaths with COVID-19” have become “deaths from COVID-19” as the coronavirus pandemic has grown. And “positive tests for COVID-19” have become “COVID-19 cases.”

And health care bureaucrats (who don’t treat patients) tell docs (who do) how to do it. And what medicines not to use. And patients die. And so does trust in experts. And so does respect for authority. Belatedly. And so does our respect and tolerance for one another. Not so belatedly.

The former President now suffers from a monumental case of buyer’s remorse. So does the country. And the Little Doc keeps crying wolf and looking for 1.8 million missing deaths.

Some states suffer more than others. Woke states that bought the narrative seem to suffer more than those whose governors believed their lying eyes. New York and Florida represent extremes. New York leads the nation in age-adjusted excess deaths per capita from all causes.

In contrast, Florida is blooming. And booming. It’s gaining people and businesses, including some from New York. Its unmasked citizens are living normal lives – on their on, without direction from government nannies. It has more than its share of seniors. They seem to thrive in its sunshine (more natural vitamin D) and its freedom. Florida’s age-adjusted excess deaths per capita from all causes are about half New York’s. To be fair, New York doesn’t have as much sunshine as Florida. But it makes up for that with more nannies.

Mississippi has more sunshine than New York. And fewer (but more than enough) nannies. However, it’s second only to New York in age-adjusted deaths per capita from all causes. That’s surprising because it is not densely populated and has no subways or crowded venues or other virus incubators (except nursing homes). And it is largely masked and socially distanced.

Why then does Mississippi have so many excess deaths? Maybe because it ranks first among all states in obesity. Obesity increases mortality rates significantly on its own and even more so when coupled with COVID-19.

Maybe it’s also because masks and social distancing don’t keep COVID-19 from running its natural course and then fading into the environmental background as other viruses do. It’s doing that now. It might have done it sooner. However, flattening the curve made it take longer. And probably increased deaths from all causes.

All of these things can lead to overcoding and overcounting COVID-19 deaths and cases. They make the coronavirus wolf look bigger and badder. It’s possible to rig COVID-19 death counts and case counts to make the pandemic look worse and last longer. Or end sooner.

It’s harder to rig total deaths from all causes and excess deaths vs. historic averages adjusted for population growth. If you then adjust for age differences in different populations (because COVID-19 kills the elderly disproportionally), you can compare different states and different countries to see the effects of different policies. And argue about what other adjustments to make (e.g., demographic, geographic, socio-economic, etc.) to draw meaningful conclusions and make informed judgements about whether governments’ policies help or hurt.

On this point, it’s interesting that Sweden ranks in the lowest quintile of excess age-adjusted deaths despite few government controls — for which it has been roundly criticized and shamed by keepers of the narrative.

On the other hand, Germany, which has been praised by narrative-keepers for its strict Germanic controls, sits right next to Sweden in the rankings. Go figure. There are reports of rioting by German youths fed up with lockdowns. It’s not surprising there are riots. It is surprising they are reported. No reports of civil unrest from Sweden though, that I have seen. No reason for them to riot. They seem to be leading more or less normal lives. Like Floridians.

Mississippians are not leading normal lives though. I’m surprised at our patience and tolerance for the loss of our individual rights, infringement of our religious liberties and our deference to dubious authorities.

Why are we so blind to this? Good manners? Fear? Or none so blind as will not see?