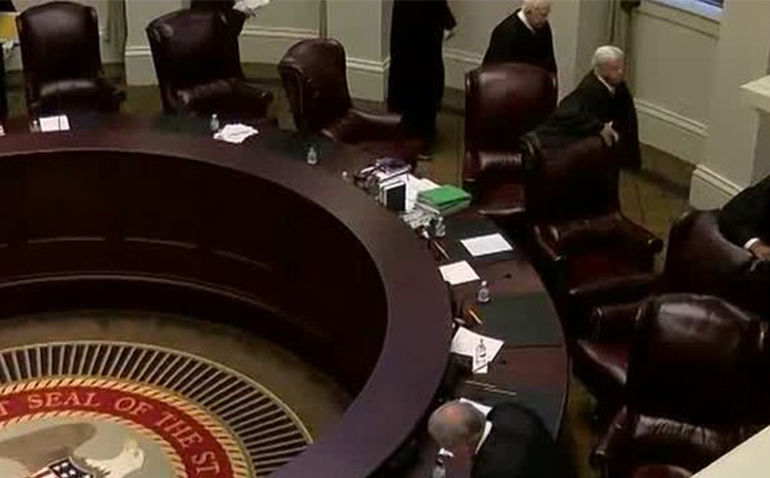 The battle for Initiative 65 reached its zenith on April 14 when the state Supreme Court heard oral arguments in the case from the two parties involved.

On one side is the city of Madison, seeking not only to get Initiative 65 and the resultant medical marijuana program thrown out, but the entire ballot initiative process as well.  This process dates to 1992 and the signature requirement was affixed at the five congressional districts that existed at the time.  Despite an attorney general opinion that gave this process a fig leaf of legitimacy (AG’s opinions don’t carry the weight of law), the Legislature failed seven times after the 2000 census to fix the discrepancy, opening the door for Madison’s legal challenge.

Their first argument was that the case wasn’t about the propriety of medical marijuana, but eliminating the still-to-be implemented program is the whole reason for the legal challenge to the ballot initiative process.  They’re not challenging voter identification or eminent domain initiatives.

The old cliché “throw the baby out with the bathwater” is applicable here.

Their argument is based on the concept that since the state now only has four congressional districts, Initiative 65 was illegitimate and needs to be cast out.  The problem with this legal argument is that it will clearly provide opponents of voter identification and eminent domain reform an easy blueprint to overturn both initiatives that passed with the approval of a large majority of voters.  The Southern Poverty Law Center or other left-leaning group could use this argument to derail voter identification.

Another possibility is a large company that wants the state to seize land on their behalf using more expansive eminent domain powers granted by the U.S. Supreme Court decision in Kelo v. New London.  This decision gave government the right to use eminent domain to forcibly purchase land to provide it to a private firm for economic development purposes.  In other words, if a better tax deal comes along, the government is well within its rights to forcibly purchase your property and give it to another entity that will enrich its tax coffers.

The ramifications of either choice is clear.  It’s likely that an elected state Supreme Court will be leery of killing a program that received nearly 74 percent of the vote.  The pitfalls of striking the state’s ballot initiative process would also end the ability of citizens to amend their constitution via direct democracy.

Allowing Initiative 65 to proceed would create regulatory headaches for the state Department of Health as it scrambles to comply with the mandates in the initiative.  It’s also concerning that the sale and distribution of a product would be enshrined in the state’s constitution, unlike tobacco or alcohol.  Municipalities would have their zoning power curtailed because of 65’s binding strictures on whether city leaders could disapprove of growing houses and dispensaries in their city limits.

The initiative requires that marijuana dispensaries be subject to the same zoning regulations like a licensed retail pharmacy and that other marijuana-related businesses be treated for zoning purposes like similarly-sized commercial businesses.