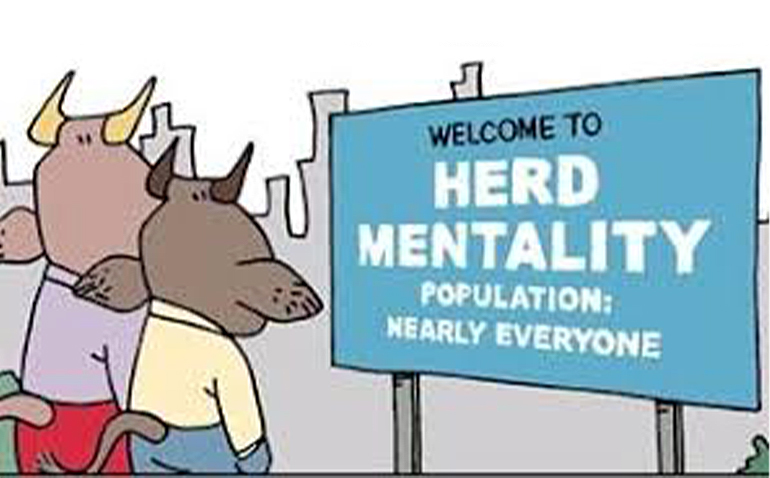 Sometimes there’s safety in numbers.  A Cape Buffalo in a herd is less likely to be eaten by lions than a straggler.  Sometimes there’s danger.  American Indians stampeded herds of Bison over cliffs and butchered the injured and dead.  We ordinary Americans seem more like Bison stampeded by experts than Cape Buffalos staring down hungry lions.

We’re social distancing, sheltering-in-place, losing jobs and committing economic and social hari-kari because of experts.  They said we had to flatten the Coronavirus (Covid-19) typical bell-snapped infection curve.  Otherwise, hospitals would be overwhelmed with virus victims when the epidemic peaked.  That hasn’t happened.  Few hospitals have been overwhelmed.  Apparently none in Mississippi.

Flattening the curve makes hari-kari take longer and prolongs the pain.  That was the point of the ritual suicide.  The Samurai slowly sliced his belly open with a short knife while another  stood by to lop his head off when he had suffered enough.  There was no stopping partway through to put the Samurai back together.  But that’s what we are about to try by order of the President with help from experts under the direction of Governors.

Experts (Dr. Fauci and Dr. Birx) who are to help get us out of this mess are the same ones who got us into it.  They told the President there would be 2.2 million U.S. deaths from the virus — unless we committed economic and social hair-kari.  Now they say there won’t be so many.  Maybe just 60,000 or so.  About like an average flu season.

The President said Governors can now “stop the hari-kari” in their states (subject to experts advice).  Haven’t we had enough of the experts?  Isn’t it time for some common sense and perspective?  Haven’t we been stampeded long enough?  Can’t we break the herd mentality?

Our Governor just appointed a commission to help us recover.  I don’t see any credentialed experts on the commission.  Good.  I do see exceptional ordinary people who have accomplished things.  And who can probably understand the pain and fear of other ordinary people caused by our collective economic and social suicide.  People who don’t have  guaranteed or secure jobs.  Or any job.  And who don’t have letters after their names.

I hope the appointed understand they are mainly for show and that the Governor will make his own decision.  That’s how it works in a democracy.  That’s what he was elected to do.  Hopefully they have some common sense, a sense of perspective, good judgement and the self-confidence to question experts.  Here are some questions they might ask them.

How do you know that 6 ft. of social distancing, shutdown of “non-essential” businesses and of worship and of other activities, use of masks and other prescribed remedies actually reduce virus infections and deaths?  How do you know that ten people is the optimum over/under for social gatherings?  Do you have controlled double-blind trials that prove any of this?

Probably not because there are too many variables to identify and control.  So, are your remedies just guesses?  How do you justify them without your double-blind trials?  And at the same time dismiss life-saving reports and endorsements by hundreds of doctors who have actually treated Covid-19 cases with legacy drugs because they don’t have such trials?

How do you experts know that increases or decreases in reported cases show anything useful about how fast the virus is spreading?  Or where we are on the epidemic curve to make valid judgements about herd immunity and stopping the hari-kari?  Many cases are asymptomatic and uncounted.  Apparently you don’t know how many total cases there are, where they are, when they occurred, or how to control them — or even if it’s possible.

A recent report on the first widespread antibody testing of a representative sample of 3,300 people in Santa Clara County, California showed that 48,000-81,000 people may have been infected vs 1000 tested and counted in the county’s official tally.  That’s some 50-80 times as many people with antibodies (showing they have already had the virus and have recovered in a county of 2 million people) as there are certified cases.

So what conclusions can be drawn from the larger sample of those with antibodies vs the smaller number of those with the disease?

I think you could conclude that the virus case death rate is much lower than announced by doomsayers (despite inflated death counts) if there are 50-80 times more cases than were used in the denominator to calculate the death rate.  You could probably also conclude that the virus has been around longer than our collective hari-kari efforts to contain it.  Without doomsday results.  And that we didn’t need to sacrifice our freedoms and the economy.  And that Big Brother doesn’t know best.

It might be instructive to look at South Dakota.  The Governor there is also a young Republican with national potential.  She rejected advice from experts and relied on the common sense of her ordinary people.  She didn’t order hari-kari.  She’s been harshly criticized by experts’ syncopates because she didn’t.  She hasn’t flinched.

The latest CDC death count in South Dakota is 6 per million population.  It’s not suffering from hari-kari.

The latest count in Mississippi is 25 deaths per million.  It hopes to begin recovery from hari-kari soon.