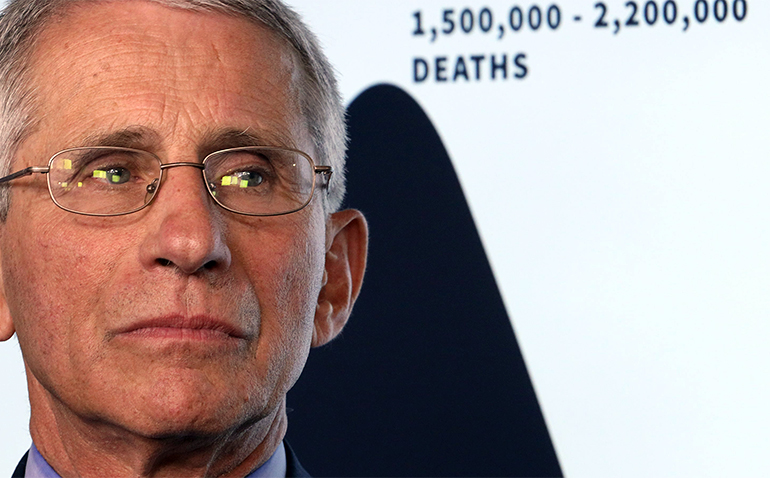 “In theory, there’s no difference between theory and practice. In practice, there is.” Yogi Berra was right. Presidential adviser Dr. Fauci is wrong.

His two million hypothetical deaths and lockdown theories to prevent them prove it. Politicians who listened to him and to other public health experts have turned a two week experiment to flatten the classic epidemic curve into a five month national nightmare – with no end in sight. Each new absurd decree to address some hypothetical virus risk leads to another even more absurd decree.

Sharply declining death rates in Mississippi show the epidemic has about run its course here as epidemics do — naturally. Just as it has in most populations, even as infections increase due to more testing. But absurdities abound and grow. They have caused the nightmare, not the virus.

The latest Mississippi absurdity is high school football with only two masked fans per player in the stands — in deference to social distancing. Why two? Maybe a model showed 2.532 fans per player provided optimum social distancing in a hypothetical stadium with a hypothetical team and student body and fan base. Then, maybe an adviser said: “Oops 2.532 is theoretically correct. But it won’t sell. People will laugh at it. Just go with two. They’ll laugh at that too. But they’ll do it anyway. Won’t they?”

Suppose they don’t? How much absurdity is too much? Which absurdity provokes a Rosa Parks rebellion — and refusal to go to the back of the bus? And open ridicule of the ridiculous? There are reports of growing speakeasy rebellions. They haven’t run their natural course.

Some of the 43 governors who ordered lockdowns must be wondering how to get off the tiger — alive politically. With some credibility left. Others are doubling down. There’s a reckoning coming. What would you think about a governor who just said: my bad. And scrapped lockdowns and social distancing and shelter-in-place and tried to restore normal life and commerce. Would you cut him or her some slack? I would.

Consent of the governed is a tenuous thing. So is trust in government. There’s not much of it. A recent survey cited by the Pew Research Center says only 17% trust government to do the right thing. Sounds high to me. Here are some reasons. They all come under the heading of politicized science and are perfectly captured in a recent Power Line Blog cartoon: a concerned patient asks her doctor, “When will this coronavirus panic be over?” He says: “I don’t know. I’m not much into politics.”

First, politically-hyped reports of 170,000 COVID-19 U.S. deaths seek to make it a deadly pandemic — even though the total is far below Dr. Fauci’s predicted two million deaths. The numbers may be inflated due to hospital reimbursement bounties for coded COVID-19 deaths (deaths by vs deaths with) for victims with multiple terminal diseases.

CDC statistics show 50% of the coded COVID-19 deaths are over age 78 (normal life expectancy). And that only 20% are under age 65. About half the deaths were in nursing homes. Some 10,000 of these were due to political decisions to send COVID-19 cases from New York hospitals to nursing homes.

Lockdowns of over 95% of the population at low risk served no purpose for those who died from COVID-19. And were already locked down by age and illness — but not protected. They were sitting ducks.

And then there are hydroxychloroquine treatment protocols proscribed by Dr. Fauci and others. If allowed, they could have prevented (and still can prevent) many COVID-19 deaths. There was a recent Martin Luther moment about this. In 1517, the angry priest nailed 95 theses to Wittenberg Castle Church door challenging church rot and dogma. It started the Protestant Reformation.

Last week three angry doctors from California and Florida (who actually practice medicine) sent an open letter to Dr. Fauci with 127 questions challenging bureaucratic rot and dogma that prevents effective use of hydroxychloroquine therapy. Two of the questions: Do you know that third world countries with healthcare delivery systems inferior to ours (but which use hydroxychloroquine) have case-fatality rates that are half ours? And that early use of hydroxychloroquine could have halved our deaths?

But half the deaths wouldn’t be a pandemic and wouldn’t justify lockdowns. And other absurdities. Exactly.

But politicians just can’t admit that: “The Virus Doesn’t Care about Your Policies” according to a scholarly article by J.A. Tucker, American Institute for Economic Research. He says: “Based on the data, there seems to be no relationship between lockdowns and lives saved. That’s remarkable, given that we know for sure that lockdowns have destroyed economies the world over.”

Prof. Isaac Ben-Israel of Tel Aviv University concludes in the same article after looking at data from around the world that the virus comes and goes after 70 days regardless of the policies deployed — with no relationship at all between locking down and transmission and death.

Interestingly, pandemics were war gamed in 2016 by a distinguished panel led by D.A. Henderson who is credited with eradicating small pox worldwide. Their conclusion: draconian lockdowns for pandemic flus were rejected as ineffective and destructive.