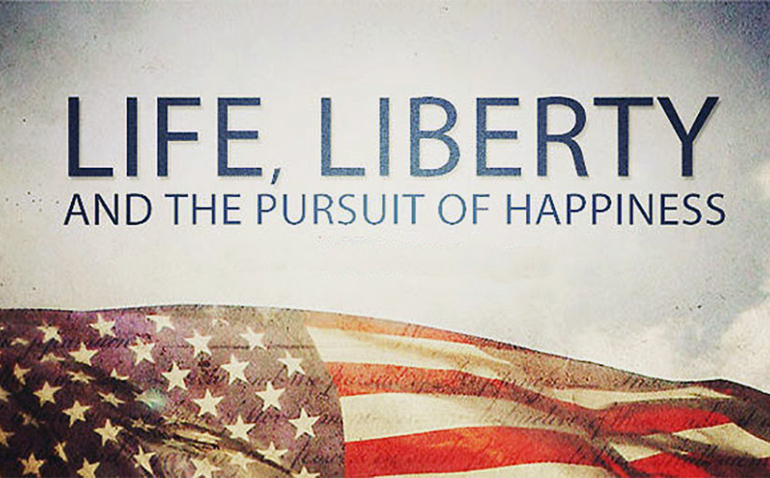 Our Declaration of Independence says: “…Governments are instituted among men, deriving their just powers from the consent of the governed…”  Government’s purpose is to secure our unalienable rights including Life, Liberty and the pursuit of Happiness.  The government hasn’t done this.  It has abused its powers to take our rights.  So the governed have withdrawn their consent.  A clue is: “Let’s go Brandon.”

There is a scene in the classic movie “Norma Rae” about an exploited cotton mill worker played by Sally Field.  Norma Rae is a nobody.  A (cotton) linthead.  But she finally has enough.  She climbs up on her work table and holds up a hand-lettered sign that says “Union.”  And slowly turns.  One by one the other nobody lintheads see her sign and stop working.  Norma Rae’s sign is a metaphor for mill boss’s abuses. The powerless nobody lintheads respond and shut down the mill.  Suddenly, the powerless had power.  And the powerful didn’t.

Let’s go Brandon is a metaphor for the rejection of government abuse by nobodies.  It reflects growing rebellion by pilots, nurses, doctors, truckers, police, firemen, parents and others (who actually do useful work) against politicians, government healthcare bureaucrats and experts who have taken their rights.  The mill couldn’t run without workers.

The country can’t either.  But it can run without inept politicians, healthcare bureaucrats and experts.  The more edicts they issue, the worse the outcomes for the country.  History’s propaganda-free judgement may show that government interventions caused more deaths and misery than just standing there and doing nothing.

Healthcare bureaucrat Dr. Fauci is a poster child for hubris and ineptness.  He illegally funded gain of function research in a Chinese lab to create an unnatural virus.  It kills the sick and the elderly – clustered in nursing homes and hospitals.  Where they die.

He cried wolf to magnify fear of the virus, create panic and justify edicts that target the young and the healthy (who are rarely casualties), destroy jobs, and intensify social and political differences.  He ignored the sacred Hippocratic Oath: First do no harm.  He has done great harm.

Other healthcare bureaucrats and politicians piled on to make the virus more lethal for the vulnerable.  They effectively prevented early legal off-label treatment by personal physicians that saved lives.  They mandated official treatment protocols in hospitals only.  This delayed treatment – which increased mortality.

Then they admitted the dying to hospitals and discharged those who survived to nursing homes to infect others.  They ignored natural acquired immunity and put all their eggs in a vaccine basket.  They put their reputations and basis for their authority in the same basket.  So they guard it fiercely.  And label those who question: heretics.

Funny how the vaccines couldn’t work, wouldn’t work and didn’t work until after the 2020 election.  Also funny how COVID-19 cases and deaths increased after the election.

Also funny how three weeks to flatten the curve morphed into extended national purgatory because those who thought they knew better ignored advice from Dr. D.A. Henderson who led the worldwide effort to eradicate small pox – and did know better.  In 2006, he advised against social distancing as a pandemic measure saying it would “result in significant disruptions of the social functioning of communities and result in possibly serious economic problems.”

Unlike smallpox vaccines which produce lasting immunity to smallpox, the mandated vaccines are only temporarily and partially effective.  The CDC recently made an Orwellian change to its definition of vaccines from “providing lasting immunity to a specific disease” to “stimulating the body’s immune response against diseases.”  Partially effective stimulated immune responses  may encourage natural mutations and lead to new waves of infections.  It appears those who  have been vaccinated actually spread infections.  Vaccine enforcers censor and ignore these issues and reports of serious vaccination side effects.

Some health care professionals and informed others fear to be vaccinated.  And refuse.  And face loss of jobs.  Freedom lovers resent “show me your papers” and those who demand them.  They also resent repeated tests and inevitable increases in false positives that are decreed to be infections or cases.

One effective off-label medicine is ivermectin.  It is little used here because U.S. health care bureaucrats ban it, deride it as “horse medicine”, and threaten doctors who prescribe it with loss of license.  Yet, the discoverers of this multifaceted drug received a Nobel Prize in 2015.  It was the first Nobel awarded for treatment agents for infectious diseases since the one in 1952 for streptomycin.  (COVID-19 and variants are infectious diseases.)  Ivermectin is listed as one of 50 essential medicines worldwide.  It’s not horse medicine.

Ivermectin is used in other countries to treat COVID-19 because it’s cheap and it works.  It has triggered a fierce propaganda war in Indonesia over its effectiveness between those who want it and those who don’t want them to have it.  Seems the U.S. doesn’t have a monopoly on government nannies in jackboots and neighborhood Karen’s – who know what’s best for everyone.  Or on complicit propagandists who empower and defend them.

The propaganda machines have been all over one high profile ivermectin user here: Green Bay Packers MVP quarterback Aaron Rogers.  He’s not a nobody linthead.  But he says he’s the victim of a woke mob for refusing to be vaccinated.  His reasons show thoughtful assessments of the vaccine’s risks and benefits, understanding of his personal rights and freedom, uncommon disdain for group think, and admirable courage and independence.  He deserves a “Norma Rae” in addition to his MVP’s.  Hope he doesn’t lose his job.  Or his spunk.