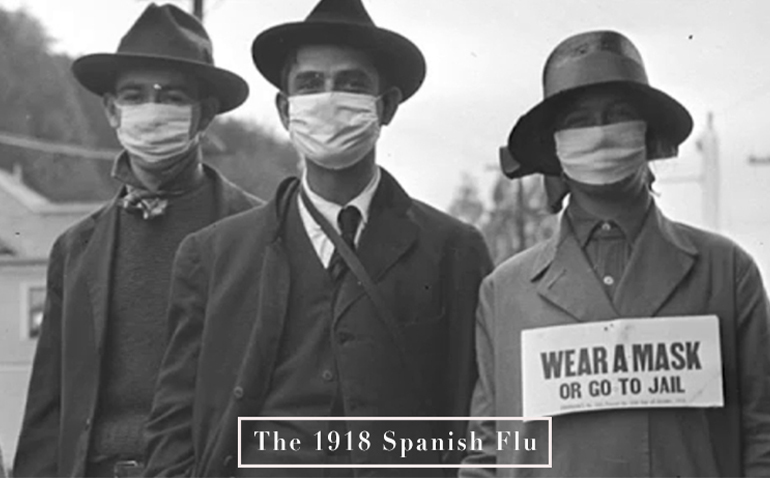 My grandmothers were born in the late 1800’s. They might have worn asphidity bags filled with smelly herbs to ward off colds and other diseases. Many rural folk did then. Some accounts say asphidity bags were used to ward off the Spanish Flu. So were face masks. They may have saved some lives. Who knows?

But the Spanish Flu still killed 675,000 in the U.S. and over 50 million worldwide. It burned itself out despite mass troop movements and wartime congestions. Epidemics do that naturally without regard to experts’ admonitions and state edicts – which often make things worse. We look back now and may say asphidity bags were just a superstition. But few would say they caused any harm.

The Spanish Flu killed the young and healthy at a rate of 6,500 per million in the U.S. There were fewer old Americans then. The average life expectancy was 52 in 1916. (It dropped to 39 in 1918.) Today COVID-19 kills the old and the unhealthy at a rate of about 450 per million. (Almost half the deaths are in nursing homes.) There are more of us today. And we are older. The average life expectancy today is 78. More of us may be unhealthy. The CDC recently reported that 40% of Americans suffer from obesity, a known COVID-19 comorbidity. It was probably uncommon in 1918.

Face masks are recommended today to reduce the spread of COVID-19. In many states they are mandated along with lockdowns and other measures to save lives. Such measures may have saved some lives. Who knows. We may look back and say they were just superstitions. But we already know lockdowns have caused great harm. So have other edicts such as sending COVID-19 patients from hospitals to nursing homes.

Bureaucrats and experts can’t just stand there. They have to do something. Even if it’s wrong — especially if they aren’t harmed themselves. Few of them have lost their jobs or their businesses or their health or family members due to deferrals of “non-essential” treatments.

I wrote earlier that the legacy of COVID-19 might be a well-deserved loss of trust in and respect for authority. It’s happening. Take the poster child for bureaucratic expertise, inconsistency, and ineptitude: Dr. Anthony Fauci. He’s one of two “very smart people” who told the President that COVID-19 would cause over two million deaths unless drastic measures were taken.

His advice led to drastic measures: lockdowns, social distancing, and mandatory face masks — even though he’s waffled about face masks. First he poo-pooed them. Then he endorsed them. Most recently he threw out the season opening ball (wild pitch) at the Washington Nationals baseball game while masked on the pitcher’s mound 60 feet from the catcher. Moments later he was photographed in the stands sans mask sitting un-socially-distanced between two people.

His hypocrisy bookended a report from Ocean Beach, CA, of a masked woman haranguing a couple sitting at a table and pepper spraying them for eating in a dog park and not wearing masks. (They removed them to eat.) It seems not wearing a mask is hazardous to your health around mask-wearing Karens. We have virtue-signaling snitches at Next Door Jackson. But no reports of pepper spraying vigilantes so far.

Seems that lockdowns bring out feelings of omnipotence and lurking tyranny and reveal native stupidity heretofore masked by credentials and degrees. The aforementioned Dr. Fauci praises New York’s Governor for his handling of COVID-19 (which sent infected patients from hospitals to nursing homes where there have been over 20,000 reported deaths).

The Governor has been labeled Fredo after the pathetically inept oldest brother from The Godfather. Power Line’s blog of the latest Week in Pictures shows Fredo with this caption: “I’ve done a lot of bad things in my life. But nothing I ever did was bad enough to deserve to be compared to Chris Cuomo.”

There are lots of Fredo’s strutting around. We don’t know what further damage they will cause and how this horror movie will end. But we haven’t heard from the Sargent York’s and Atticus Finch’s yet.