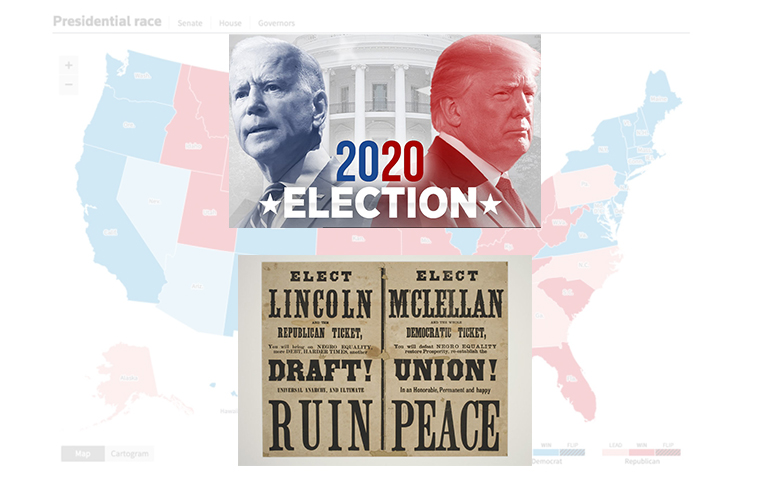 Some Other Close Elections

A recent Wall Street Journal article by David Oshinsky vividly describes some close historic  presidential elections – and lasting changes they caused.  It was written before votes were cast in the close – but unfinished current election.  It too may produce lasting changes.  It’s hard to believe, but this election may not be the ugliest.  And may not be the most transformative.

And “news” anchor Anderson Cooper’s description of President Trump (“an obese turtle on his back flailing in the hot sun”) may not be the most disrespectful of the President and the Office.  Abraham Lincoln was vilified harshly – if not more imaginatively: Tyrant.  Despot.  Widow-maker.  Abraham Africanus the First.  Baboon.

The country was bitterly divided in the election of 1864 after three years of bloody civil war.  The election race was all about race and the war.  A rebel raid came within five miles of the White House that summer.  President Lincoln was pessimistic about his chances.  In August he said: “It seems increasingly probable that this Administration will not be re-elected.”  His opponent was General McClellan.  Lincoln fired him because he wouldn’t fight.  General Grant, who replaced him, did.  But memories of victories at Vicksburg and Gettysburg in 1863 faded.

And the war drug on.  Casualties mounted.  Peace Democrats wanted the war over.  Republicans wanted the South’s surrender with tough terms.  Lincoln was caught in the crossfire.  His popularity fell.  The race became a referendum on his behavior and leadership.  Then a telegram from General Sherman brought a September surprise.  Atlanta had fallen.  The war turned for the Union.  Lincoln’s chances improved.

He went on to beat McClellan handily.  One lasting change from that election was the first use of absentee ballots to permit Union soldiers to vote.  Thirteen states permitted absentee voting in the field.  Four allowed soldiers to mail their votes in a sealed envelope to a trusted stand-in.  Some states balked.  Lincoln urged generals to furlough soldiers to vote in those states.  Some complained.

But Lincoln said he would rather be defeated with the soldier vote than elected without it.  He got 80% of the military vote in states that tabulated it.  There were isolated instances of fraud.  But the process went smoothly.

It’s estimated that over a third of the votes cast in the current election were by mail.  The process did not go smoothly.  There are reports of trashed military ballots.  Republicans allege widespread ballot fraud in many states.  They are litigating.

Democrats alleged ballot fraud in Florida in 2000.  They litigated.  The issue then was hanging chads.  It went to the Florida Supreme Court and then The U.S. Supreme Court which returned the issue to the Florida Supremes on December 12, effectively resolving the issue for George W. Bush and preserving his win.  The U.S. Supremes said Florida had not followed its laws re vote counts and that some of its laws were flawed.  Republicans say many states have not followed their laws re vote counts in the current election.  They make the sauce for the goose – sauce for the gander argument for fairness.

Anderson Cooper and other news makers have rushed to declare Joe Biden president elect.  Prematurely at this point.  The New York Times rushed to declare Thomas Dewey President-Elect in 1944.  Prematurely.  Harry Truman won in one of the greatest upsets in history.  The electoral college votes count.  Not talking heads.

The election of 1828 was transformative.  Andrew Jackson was the first to use large rallies and torchlight parades.  He was uncouth and violent.  And tough.  Before becoming  President he killed an insulting critic in a duel — after taking his bullet in the chest.  (That discouraged more insults.)  He used the office to defend the Union against those who tried to divide it.  So did Lincoln and Thomas Jefferson who won a bitter election against John Adams in 1800 under the new party system.

History records no riots in 1800.  No threats to secede.  No calls for military intervention.  There was a peaceful transfer of power.  Jefferson said at his inauguration: “We are all Republicans, we are all Federalists.”  Today we are all still Americans.  But with differences.  But then we have always had differences.

The current election has highlighted some of our differences.  Talking heads aggravate them.  And take sides.  It’s estimated that over 90% of opinion makers (media, academia, entertainment, social platform tycoons, etc.) are Democrats.  Republicans say you can’t believe most of what you see, hear, and read.  So they also say it’s hard to get objective opinions about our differences.

Or about anything — including science which is often invoked to justify lockdowns, masks, and other infringements of individual liberties.  The infringements seem to aggravate our differences.  The election of 1864 was all about race and the war.  It was a referendum on Lincoln’s behavior and his war leadership.  The current election has been all about class and COVID-19.  It was a referendum on Trump’s tweets and his failure to stop COVID-19 cases (positive tests) from increasing.

The election of 1864 turned on the fall of Atlanta and the improving outlook for a Union victory.

Today the “news” is about the improving outlook for a COVID-19 vaccine and relief from lockdowns and masks.  And victory over COVID-19.  How timely.  Whose victory?

And our opinion-making class knows what’s best for all classes.  Especially for our upper-class.  Seems some pigs are more equal. (Animal Farm)