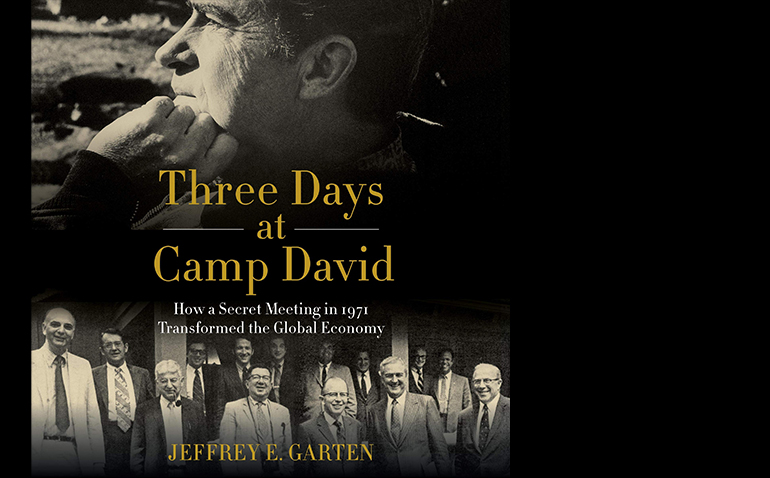 What happens when the President of the United States brings the smartest guys in D.C. to join him at Camp David for a three-day weekend? If you are old enough to remember runaway inflation, long lines for gasoline, stagflation and other trials and tribulations of the 1970’s you might have a good idea. It is important history with some valuable lessons for the challenging times we face today.

Author, Jeffrey Garten is a serious academic – Dean Emeritus of the Yale School of Management, an experienced player in the D.C. arena where he served a stint as Undersecretary of Commerce in the Clinton Administration and successful author. His latest book provides important insight on how politics works at the highest level of the federal government, and how an emergency committee filled with high level intellects and big egos cobbled together a landmark program at a pivot point in American history.

The spring of 1971 found the Nixon administration staring down a financial catastrophe – a run on the government’s bank – not an old-fashioned cash withdrawal run but a foreign country run on America’s gold bullion. At stake was nothing less than the global monetary system that had enabled international trade and economic growth around the world since the end of World War II. The Bretton Woods Agreement called for the U.S. to exchange gold for dollars at $35 per ounce. America’s gold supply was perilously low, and rumors were swirling that the U.S. might close the gold window. This was a big deal that called for decisive action.

The Nixon team convened at Camp David included noteworthy big shots like Connally, Weinberger, Burns, Volcker, Peterson, Stein, Safire and Shultz. Their mission: solve the money crisis. The solution was shock and awe – the closing of the gold window was complemented with a charcuterie board of policies to include tariffs, tax incentives, investment credits and wage and price freezes. It was big, bold and self-described as the most comprehensive change in forty years.

“Three Days at Camp David” is an entertaining read for political junkies. It is filled with big talk, high IQs, giant egos, inside baseball, wheeling, dealing, sausage making, some sleight of hand and finally – unintended, far-reaching consequences beyond any of the participants’ horizons or wildest imagination. It is safe to say that no one on the team dreamed the price of gold and oil would skyrocket ten-fold (1000%) in the decade following the meeting. Or said another way – the dollar would lose 90% of its purchasing power.

The book is also instructive for entrepreneurs and investors trying to navigate a rapidly convulsing economic landscape in 2022. One only has to look at the unprecedented new policies and programs enacted in the wake of the COVID-19 pandemic. Add to those, the recent strict sanctions against Russian banks and energy exports. The long-term consequences of this smorgasbord of policies are unknowable – even by the smartest guys in the room.

An important point to remember – policy matters and big policy changes done in a hurry matter even more.