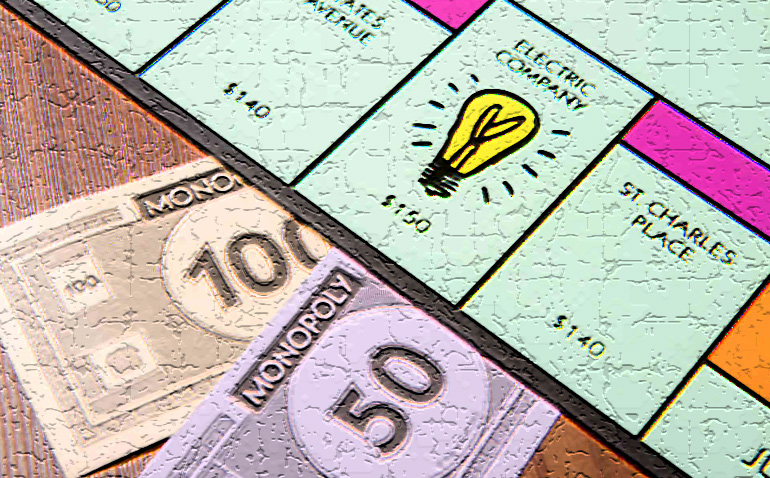 Nothing if you are one.  Like Entergy Mississippi and Mississippi Power.  Regulated monopolies are largely protected from competition and are great for their shareholders.  Not so great for their customers though.  Especially if the regulator (the Public Service Commission) has its thumb on the scale for the monopoly.

And if the utilities’ army of lobbyists out-mans or out-womans and out-spends and out- entertains and consequently out-influences the Legislature, which makes the rules for its regulator to favor utilities.  It’s a slam dunk for utilities in the Legislature since most of their customers don’t have lobbyists.  Or anyone else to speak just for them.

So the Legislature makes a rule telling the PSC to put its thumb on the scale for the monopolies.  And the monopolies’ advertising and public relations campaigns make customers think their electric rates are a bargain.  And that solar plants and other green energy experiments will generate electricity cheaper than plants running on natural gas.  And that billions spent to build and maintain Entergy’s old Grand Gulf nuclear plant (which runs occasionally) are a good deal for customers.  And so on.

We have written before about how regulated monopolies and their political allies deceive customers.  You may remember Mississippi Power’s Kemper County Lignite Plant.  It was a scheme to charge customers for an expensive green energy experiment to turn low grade coal (lignite) into synthetic natural gas to generate electricity.  Its hopelessly complicated Rube Goldberg gasifier failed as predicted.  So Mississippi Power and its Southern Company parent wrote off over $6 billion they planned to mark up and pass on to customers.

Many politicians and two of the three PSC Commissioners backed the expensive Kemper experiment.  So did the Public Utilities Staff (PUS) — a state agency created after a Grand Gulf scandal sent two PSC Commissioners to prison.  It’s supposed to advise and keep an eye on the PSC.  Some watchdog.

Support for Kemper and its higher rates lasted until more information made it politically toxic.

If you wonder why anyone would back an expensive experiment vs a cheaper proven alternative, it’s because utility monopolies make more money from expensive plants than from cheap plants.  They get a guaranteed profit (return) on the money they spend (capital invested).  So the more they spend, the more they make.

We want to take the PSC’s thumb off the scale for utilities.  One of our board members tried to call a Legislative Committee Chair about this last year.  He reached her at a Saints game — in the Entergy Box.

Ironically, that game is remembered for a thumb-on-the-scale officiating mistake.  A pass interference no-call (probably inadvertent) hurt the Saints chance to make the Super Bowl.

Utilities have armies of lawyers and consultants to persuade the PSC to increase rates.  They can jump through rate case hearing docket hoops for their clients.  A few large customers have lawyers and consultants to jump through PSC hoops too and get them sweetheart contracts  (confidential contracts that other customers don’t see).  But most customers don’t have anyone to speak for them.  And the utilities like it that way.

We think the PSC should put customers’ interests first.  Especially small customers.  We want a  state customer or consumer advocate to represent those customers who have no effective voice now.  Studies show this works in other states.  Such advocates level the regulatory playing field somewhat and reduce the officiating advantage utilities enjoy.

The Public Utilities Staff can be charged and reorganized to do this.  It can also continue to provide expert analyses for the PSC to counter-balance utility experts in an adversarial proceeding and help the PSC make better and fairer decisions.  No more Kemper’s.

Now there is a new omnibus rule before the PSC.  It’s called the Integrated Resource Planning Rule.  It may be a good idea – for utilities.  It must be because they got it passed.  Now they want to write the fine print to implement it.  Without help from anyone representing their customers.

Utilities (specifically Mississippi Power) don’t want Bigger Pie to comment or intervene on the bill in behalf of customers who don’t have the time or money or expertise to do so.  Or in behalf of the general public and state’s economy which are hurt by high electric rates.

The IRP Rule says utility monopolies should foresee and plan for the future.  Other states have such rules.  The idea is if utility monopolies think about future electric demand and supply, they will do a better job of providing an economical reliable supply.  And customers and the economy will be better off.  Sounds good.  Who could be against that?

It’s hard to argue with those objectives.  If they benefit customers.  So why not let Bigger Pie comment on and help with the plan?  Possibly for the same reasons Mississippi Power and the PSC didn’t answer Bigger Pie’s questions about Kemper’s incomplete engineering, rigged projections about future natural gas prices, and optimistic assumptions about technological risk.  The answer then was hubris and things to hide.  The result was the biggest political boondoggle in the state’s history.