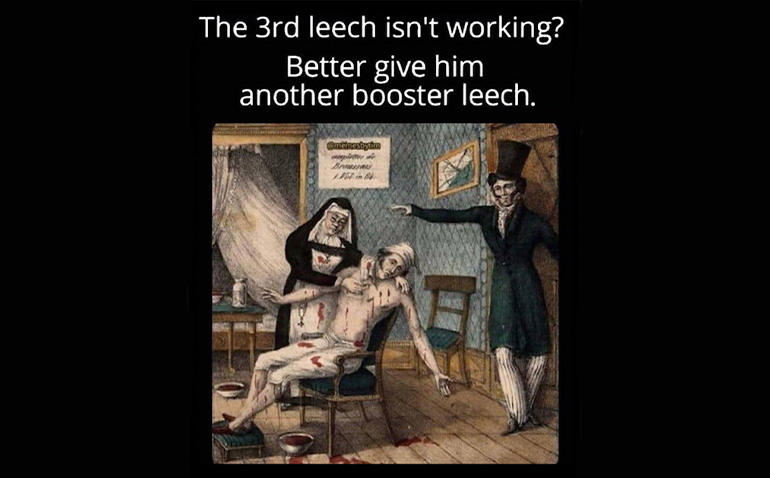 Trust the Science Fraud drove the COVID-19 pandemic – which seems to be petering out despite desperate efforts to prolong it.  What’s coming next?  Damage control and a whitewash of history?  More Big Lie coverups?  A reckoning for those responsible?  Do they have natural immunity for fraud?

Richard Feynman, the Nobel laureate physicist, was an investigator of the Challenger disaster.  He identified its probable cause – launch control error.  It was too cold to launch.  He explained why simply and clearly and observed: “Nature cannot be fooled.”

He was right.  Nature can’t be fooled.  But we can be.  And we have been fooled about COVID.  Mark Twain: “It’s easier to fool people than it is to convince them that they have been fooled.”  It’s still true.  Look at mask wearers who didn’t wear them before COVID.  Do they all have allergies now?

Trust the Science Fraud is also driving the Global Warming/Climate Change/Green Energy mania.  We’ve been fooled about it too.  But it’s not petering out.  Capital flows into green energy are accelerating.  Energy security is the latest rationalization.  Investments in BlackRock, Inc. increased over $100 billion in Q1.

War in the Ukraine and sanctions against Russian oil and gas have upset world energy markets.  The story line is that wind and solar energy will help this somehow.  A leading promoter of this fraud and ESG investing is BlackRock, Inc. of New York.  It’s the world’s largest asset manager with over $10 trillion in public company stocks.  Environmental, Social, and Governance investing is about political agendas and virtue signaling.

But Gore said burning fossil fuels increased atmospheric carbon dioxide which caused the earth’s temperature to rise.  And if it continued, glaciers would melt causing sea levels to rise and other disasters.  Temperatures have stopped rising (natural variation).  Predicted disasters are past their due dates.  Future disasters have yet to be seen.  But the Elmer Gantrys are sure they are coming.  And that Net Zero Carbon is our only salvation.  Just trust science.  Don’t worry about cost and consequences.

Legacy and social media narratives promoting both frauds have been disruptive and destructive – for rich and poor alike.  But the very poor have been hurt the most by shortages and higher prices of oil and gas – a consequence of promoting green energy and attacking carbon fuels.

Ironically, COVID causalities and damages were greater for prosperous Europeans and Americans.  They were denied cheap life-saving legacy drugs to boost demand for experimental vaccines, expensive designer drugs, lockdowns, and other social experiments.  The poor in developing countries got cheap hydroxychloroquine and ivermectin (which worked) and escaped lockdowns (which didn’t).  They fared better.

All the adverse effects of COVID experiments may take years to unfold.  However, more are becoming obvious despite censorship and attacks on independent research.  The experiments were in the name science.  But censorship of research results and informed opinions that challenge Big Lie narratives is anti-science.  Truth is revealed by free and open debate.  Not by experts’ decrees.

Richard Feynman also said: “Science is the belief in the ignorance of the experts.” (I think he meant experts are not infallible.)  Big Tobacco experts said smoking doesn’t cause cancer.  They were wrong.  Trial lawyers and independent researchers showed it does.  Tobacco companies paid billions in damages.

Of course tobacco companies didn’t have litigation immunity for smoking’s effects.  Pharmaceutical companies do for their vaccines.  But that’s no hill for a trial lawyer to climb if the companies lied.  And if health care bureaucrats did too.  Hold my beer while I buy some litigation futures.

Halliburton is a major supplier of drilling supplies and services.  Its CEO recently reported that customers are not drilling as usual.  They are not drilling expensive, high-risk, big return prospects with long life production increases – which also take a long time to pay off.  Why?  Maybe it’s the political environment.

Science frauds are expensive.  Energy ignorance is too.