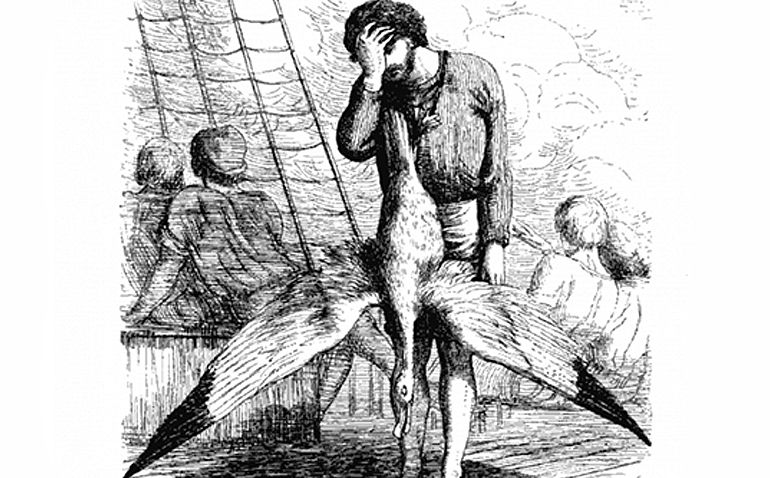 Apologies to Samuel Taylor Coleridge and the Ancient Mariner who shot an Albatross and provoked a curse.  Bad things happened.  And shipmates hung the bird around his neck.  Herewith, some modern supply chain tales.  And previews of maneuvers by those who don’t want the energy albatross hung on them.

CF Industries of Chicago is one of the world’s largest producers of ammonia.  Its primary use is fertilizer.  Its primary raw material is natural gas.  Industrial carbon dioxide is a byproduct of ammonia production.  One of its essential uses is to freeze and ship meat and perishable foods.  CF’s English subsidiary shut its ammonia plants down last week due to the high cost of natural gas (about five times the U.S. cost).  It cost more to make ammonia than it’s worth even though its price has tripled.

The food supply chain has a little slack. It’s a “just in time” world with minimum inventories and little time to spare.  So there were large ripple effects – quickly.  And portents of more to come.  And challenges for politicians and central planners and their experts everywhere, not just in England.  And questions about who shot the CO2 shortage albatross – and most importantly how not to have it hung around your neck.

But not to worry.  English politicians acted quickly to postpone the C02 crisis – for three weeks.  They bailed out CF Industries Holdings Inc. with an undisclosed three week deal.  Next crisis? Get in line.  It’s probably natural gas and electricity.

The electricity crisis will be harder to fix or postpone.  Electric supply chains have no slack.  There are no inventories of electricity.  Electricity has to be generated to match demand – on demand.  Or else the transmission and distribution grid which connects and balances electricity demand and supply destabilizes and crashes.  And bad things happen.  Remember the near collapse of the Texas grid in February and the arbitrary rolling blackout disconnects to prevent it.  And the alternative of a dark start of a failed grid and weeks without electricity for most of the state.  It was minutes away from happening, not weeks.

There are no three week bailouts to keep electric grids up and running.  Or any bailouts.  If supply doesn’t increase to meet demand, demand must decrease to match supply.  Or the whole system fails.  It’s that simple.  The larger the grid and the more diverse its electricity sources, the more resilience it has.  But even large grids like Texas’ have only minutes to cut demand to meet supply.

There are interconnects between grids to share surplus electricity.  But when there’s not enough electricity to go around, it’s every man for himself.  Or region.  Or country.

Which brings us back to England and Germany.  What happened to provoke their crises?  And what lessons are there for us?  Their electric grids have too many intermittent power sources and not enough backup (redundant or extra) sources.  Say what?  Translation: there are too many windmills and not enough natural gas, coal, and nuclear generating plants in their grids.

Windmills are intermittent sources of electricity.  They only generate electricity when the wind blows.  Solar plants are intermittent sources too.  They only generate electricity when the sun shines.  But England and Germany’s crises are primarily due to over reliance on wind power.  And failure to secure/assure natural gas supplies for backup natural gas plants.  And not enough backup plants of all kinds.

How did that happen?  There will be lots of explanations from those who don’t want the albatross hung on them.  But the root cause is the belief that fossil fuels are bad and “renewables” are good and the unintended consequences of profitable virtue signaling investments at the expense of common sense.  Tax credits and other incentives encourage investments in windmills and solar without regard to their intermittency.  So profitable intermittent wind and solar plants are built without less profitable or unprofitable natural gas backups (or other backups).

And natural gas plants are intermittent too without natural gas.  So are coal plants without coal.  And old nuclear plants that only run occasionally (e.g., Grand Gulf). Maybe Russia will provide natural gas to bail out Germany.  Strange bedfellows.  But it’s just business.  Who will bail out England?

And who will save us from destabilizing our grid with too many intermittent sources and not enough backup?  Hello Mississippi Public Service Commission.  Are you there?  Are you still obsessed with “balancing” the interests of utility monopolies and their armies of lawyers and experts with retail and residential customers who don’t know a PSC docket from a donut?

You may deserve an albatross.