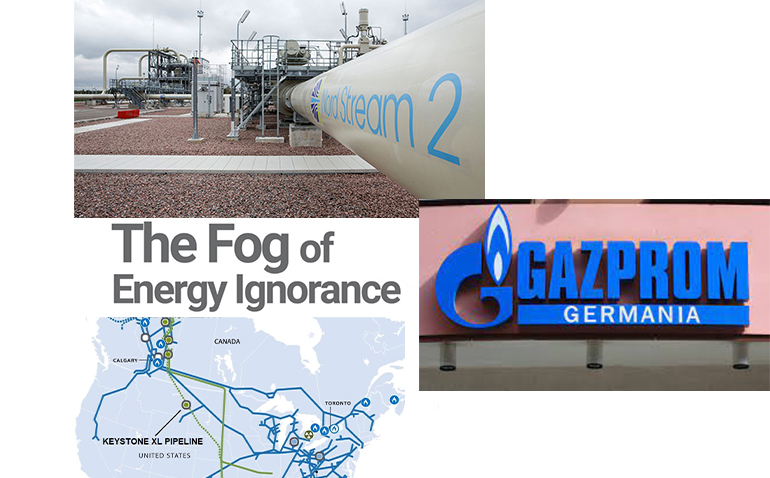 The Germans have learned that green energy from windmills is not reliable.  And that depending on Russia for reliable natural gas backup is expensive - and not all that reliable either.

I mentioned these lessons in a recent article about the Mississippi Public Service Commission and Entergy’s solar and wind investments to produce electricity - but which don’t when the sun doesn’t shine and the wind doesn’t blow.  On-again-off-again green energy intermittency disrupts the grid and causes blackouts.  So Entergy builds duplicate backup natural gas plants to keep the lights on. And customers pay more.

Fortunately, we don’t depend on Russia for natural gas.  We are self-sufficient in natural gas, oil, and coal. At least we were before politicians trashed our domestic energy producers.  Now these politicians are quietly seeking supplemental oil imports from friendly Canada - but not to be shipped through the evil Keystone Pipeline.  And from not so friendly or reliable Venezuela.  And from formerly friendly and reliable Saudi Arabia (before the Saudis quit taking our calls).

Facts and reality are mugging the global warming cult and its theories and models that cause high-cost energy.  It’s that ole Maslow Need Hierarchy thing again.  When you are cold and hungry, you don’t worry about some charlatan’s “existential threat” to the planet fifty years from now.  When we can’t forecast the weather two weeks out.

Pipelines are the least expensive way to transport oil and natural gas.  They are a causality of global warming hysteria and energy ignorance.  It’s not just the Keystone Pipeline either.  Energy ignorance is expensive.  Not just in Germany either.

Here are some U.S. examples.  Natural gas from the Marcellas Shale formation which stretches from Pennsylvania to New York sells for about $4/mcf at the wellhead.  Planned pipelines to transport it to New England for less than $1/mcf were cancelled.  So imported Liquified Natural Gas from Qatar and Trinidad now sells there for about $30/mcf. Further south we export LNG at $4.50/mcf from Texas ports to Europe and Asia where it sells for ? (a lot more).  Prices subject to frequent changes - mostly up now.

Speaking of cults, here’s another lesson from Germany via the EUGYPPIUS blog.  Germany’s health minister Karl Lauterbach is the equivalent of our Anthony Fauci.

Some say Dr. Fauci saved the world from the scourge of COVID-19.  Others say he funded its development, exaggerated its risk, dictated responses that made it worse and eroded trust in authority.  That he politicized health care and further polarized the country.  And that he profited from the vaccines, concealed their serious side effects, and discouraged early life-saving alternative treatments.

Warp speed development of vaccines ignored the “first do no harm” Hippocratic Oath because testing takes time.  Legal immunity for the shortcuts and failures to disclose their “haste makes waste” consequences discouraged challenges.  Censorship and organized shaming of those who did challenge the narrative threatened their careers.  So more Silent Scientists now. And more vaccine fatalities and other adverse events later.  Hopefully, no thalidomide babies.

It’s hard to believe, but Germany’s health minister may be even more polarizing than Dr. Fauci.  He admits that quarantine rules are useless.  But he keeps them on the books as a signal.  Eugyppius says: “More and more, Corona acquires the trappings of a parareligious cult, with its own perverse liturgy … and pandemicists themselves are forced to admit that much of what we are doing is totally useless.”  The Germans are probably more conditioned and deferential to authority than we are.

But thanks to COVID, we are more conditioned and deferential to authority than we once were.  Our conditioning started with two weeks to flatten the curve - which became two years of destructive dictatorial mandates.  We may be less naive now and more skeptical of official narratives.  But we are not nearly skeptical enough.

Many governors and bureaucrats took advantage of COVID to usurp more authority.  There once was a theory that competent dictators can run efficient countries (e.g., Mussolini made Italy’s trains run on time).  But there seem to be few competent dictators.

From the condition of our economy, our dictators are not competent.  It seems states with authoritarian governors have worse economies and more people leaving.  And states with the most draconian COVID responses have no better health outcomes - even with cooked numbers.  And they may actually have more deaths from all causes - hard to cook those numbers.

At the national level, the more executive orders the President issues, the worse our economy gets.  And the more ad libs from teleprompter scripts, the greater the threats to our national security and to international tensions.  The war in Ukraine was a “look there’s a squirrel” distraction to domestic blunders.

Not now.  It threatens long standing strategic alliances, stalemates, and balances of power.  Our “don’t get involved” involvement is not reassuring.  Economic sanctions cut both ways.  Russia’s energy will find its way to market despite sanctions - because there’s not enough fossil fuel energy to power the world otherwise.  Green energy distractions and roadblocks and ignorance make essential hydrocarbons more expensive.

Pete Buttigieg’s Marie Antionette advice to buy an electric car if you can’t afford gasoline shows energy ignorance and contempt for the poor.  Much of the world lacks electricity. The poor need cheap fossil fuels to enjoy just a fraction of our prosperity.

Ukraine has reminded us of something.  Nationalism is a powerful force.  Our land, culture, language, beliefs, religions, families, flag - are worth defending.  Ukrainians think so too.  Whatever the odds.