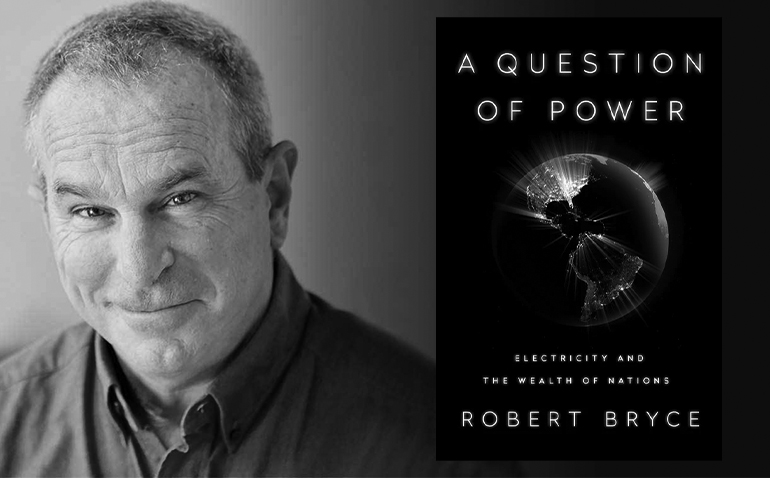 Electricity may seem like a ho-hum subject for the 21st century but think again as Robert Bryce illuminates in A Question of Power: Electricity and the Wealth of Nations.  The reality is electricity in the developed world has been so ubiquitous for so long, that it is too often just taken for granted.

Bryce has been investigating and reporting on electricity, power and fuels for the past decade. Part one of the book, "Electricity Means Modernity," explores in detail how electricity and the grids that manage it are the foundational platforms for civilization.  Sadly, countries without access to cheap reliable electricity struggle mightily to eke out a meager existence.  Folks who visited New Orleans post Katrina saw first-hand how a once vibrant city absent electricity quickly became a ghost town.

Some basics on electricity: From page 10, “There are three reasons why electricity has led to such profound human flourishing: lighting, power and density.”  It was the quest for lighting and Thomas Edison's incandescent genius that made electrification the defining paradigm of the 20th century.

Electricity has two primary requirements, capital and fuel.  Capital as in plant, transmission and distribution facilities necessary for generation and delivery.  Fuel can be everything from natural gas to coal to uranium to wind and sunlight.  The grid makes electricity available instantly in standardized voltage to multiple locations at short and very long distances and it can concentrate power to help small shops accomplish industrial sized tasks.

A noteworthy shortcoming of electricity - it is very difficult to store at scale.  Page 181 makes this point with a quote from Mark Mills, "Tesla's $5 billion Gigafactory near Reno, Nevada, is one of the world's largest battery-manufacturing facilities.  ‘Its total annual production could store three minutes' worth of annual U.S. electricity demand.'"  The storage problem also helps explain the less than 3% market share of EVs (electric vehicles) in the U.S. automotive fleet despite the trillions in government spending and subsidies to promote their adoption.  It is all about energy density - A pound of gasoline has 50 times the energy density of a pound of a 'state of the art' lithium battery.  An important takeaway is this - electricity is an ideal power source for static locations but a less than ideal solution for mobility.

Chapter 17, "The All-Renewable Delusion" covers in great detail the huge growth in wind and solar over the past decade and the challenges that these intermittent fuels create in managing the grid.  California's electricity production from wind and solar drops by 60% from summer to winter.  While wind and sunshine are 'free' fuels, such a wide seasonal variance in output requires additional capital investment for dispatchable backup.

In 2010, wind and solar accounted for 2% of America's electricity capacity - by 2020 that had grown to 11.4%.  Meanwhile, Europe and the U.K. were way ahead of the U.S. in embracing renewables, shuttering coal plants and phasing out nuclear plants due in part to the Fukushima accident in 2011.  By 2021, wind and solar accounted for 21% of Europe's electricity and 29% of the U.K.'s.  The U.K., home to the world's largest offshore wind farm, gets 24% of its electricity from wind. Alas, that changed in the summer of 2021 when low wind speeds triggered a full-blown electricity and energy crisis.  The decline in wind driven electricity across the U.K. and Europe caused a 400% spike in natural gas prices (the dispatchable backup fuel) in September 2021.  That is the energy equivalent of $300 oil and these record high prices persist today, further exacerbated by the uncertainty of natural gas deliveries from Russia and Ukraine.  In April, the U.K. energy regulator Ofgem will set the price of electricity for the year ahead.  The price is expected to Increase by 54%.  Poor energy policies are costing the citizens of Europe and the U.K. dearly.

In March 2022, energy and fuels once again find themselves at a pivot point in a global confrontation.  A Question of Power is an excellent guidebook to better understand the current situation and what might be done about it.  Regulators in wealthy nations should read it and take heed.