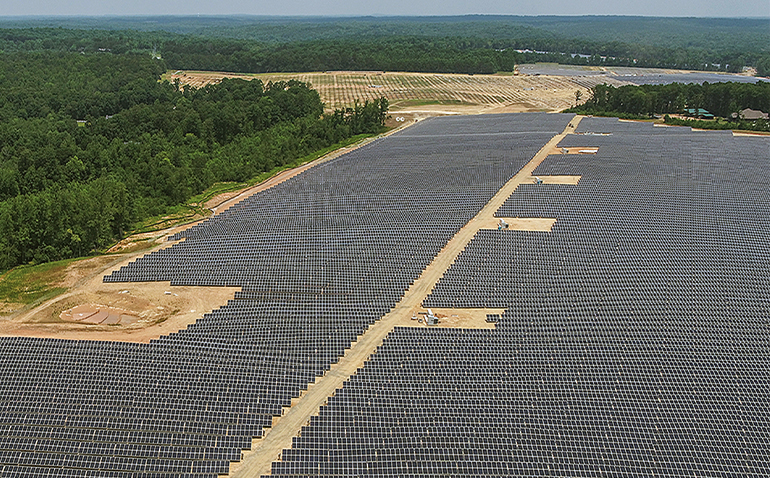 The Mississippi Public Service Commission purports to regulate utility monopolies including Mississippi Power and Entergy Mississippi. But the PSC actually shills for them. A shill is a hustler’s accomplice who touts rubes to play rigged games. Entergy’s latest hustle is a $150 million solar plant experiment. Solar energy is a rigged game.

The Central District Commissioner is the PSC’s main solar shill. His recent newsletter says Mississippi ranks 50 out of 52 in U.S. solar deployment – but is poised to shine. It describes Entergy’s solar experiment and others. It recites solar talking points. The Commissioner knows the talking points. His former job was promoting solar and “sustainability” for something called the 25X‘25 Alliance.

You may remember Mississippi Power’s infamous Kemper County lignite plant experiment. A former governor and two pet PSC commissioners touted it. It was supposed to turn lignite (low grade coal) into a synthetic gas to burn and drive turbines to generate electricity. It was also supposed to capture carbon dioxide from the burning syngas and inject it into depleted oil fields to rejuvenate them.

So, Kemper’s experimental technology would turn worthless lignite into electricity, save the planet from CO2’s global warming, and recover oil from worn out fields. A three-fer! U.S. Department of Energy experts promoted the technology. They said the Chinese would license it. And do good for mankind with it. You know – like they did with COVID gain of function research (promoted by U.S Public Health experts).

The lignite plant was supposed to cost $1.6 billion – about three times more than a conventional natural gas turbine generating plant. But after six years and $7 billion, it hadn’t run. The PSC finally decided it wouldn’t run and threw in the prudence towel – when two new commissioners replaced the governor’s pets. “Prudence” is a magic PSC word. It means customers must pay for the utility’s shell game.

The PSC determined Kemper wasn’t prudent. But it still stuck customers with $854 million of its cost for turbines modified to run on natural gas. The company paid for the rest of the failed experiment.

It now turns out that none of Kemper’s electricity was needed. The PSC said it was when it issued a Certificate of Public Convenience and Necessity (CPCN) authorizing Kemper’s construction. Ooops. Note, the CPCN authorizes plant construction. Prudence makes customers pay for it. It’s a two-step hustle.

So now the PSC says Mississippi Power must reduce its generating capacity and shut down some plants. Guess what? It’s not going to shut down Kemper’s turbines. Their electricity is more expensive for customers – but more profitable for the company. Instead, Mississippi Power will shut down part of Plant Daniel near Pascagoula.

The part of Plant Daniel being shut down is coal fired. Mississippi Power has spent $770 million since 2014 to reduce its CO2 emissions. It charges customers for this (with PSC approval). Coal gives Mississippi Power fuel diversity. This was once important to the PSC. It cited fuel diversity to authorize Kemper’s construction. But PSC fashions change.

Now with that history of the PSC’s shilling for Mississippi Power’s monopoly, you might think it doesn’t have customers’ best interests at heart. Which brings us back to Entergy’s latest shell game: its solar farm experiment in the Delta on a thousand acres of bean ground near Ruleville. The PSC said it’s needed (like Kemper was) and issued a certificate to build it. But the PSC hasn’t said it’s prudent. Yet. So, customers aren’t stuck with it. Yet.

Proponents say solar energy is green (no CO2 emissions) and sustainable (sun will shine for another billion years or so). That’s its fashion image. But solar panels generate utility scale electricity only when the sun is high in a clear sky. That’s 6-7 hours a day on average here. That’s not nearly enough in a world that needs and demands electricity 24/7. (This means duplicate natural gas backup plants). This reality has dawned in most places – including California.

California is the nation’s solar fashion leader. It also leads the nation in blackouts and electricity rationing. And in imports of electricity from reliable natural gas plants in less fashionable states. Mississippi should be relieved it ranks 50th in solar deployments. And thankful we’re not fashion fad leaders. What’s to learn from an experiment here that has failed spectacularly in California?

Are we dumb like our Mississippi stereotype? Slow learners? Rubes to be shilled? Or what?

Why do Entergy and the Central Mississippi PSC Commissioner want Mississippi to be like California?

Why obsess over this solar experiment? It’s just a little $150 million hustle. Well, Kemper started as just a little $1 million Alabama Power pilot plant experiment. It grew like a cancer in Mississippi – aided by two PSC commissioners. This hustle can infect us with solar cancer. Our grid is stable now (albeit exposed to interconnect upsets). We don’t have electricity rationing, frequent power blips and blackouts. Yet. We aren’t like California. Yet. Two PSC commissioners could prevent this. And boost their political futures. Or not.

Entergy’s next hustle is a $1.5 billion solar project if the PSC deems this one prudent. More solar projects will follow. Homegrown blackouts will too. That’s reason to obsess.