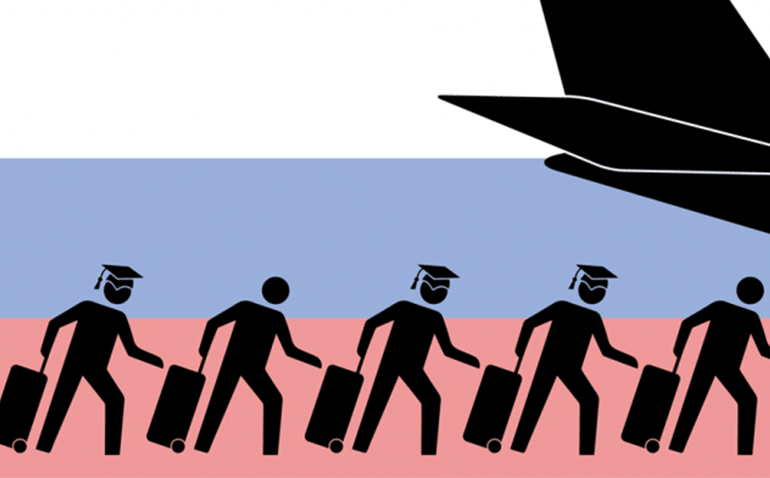 Mississippi’s population decline continues. What can we do to break the cycle?

By: Jon Pritchett and Brett Kittredge

According to new estimates from the U.S. Census Bureau, the state’s population declined by 4,871, the sixth highest total in the country. Mississippi and neighboring Louisiana, which saw a decrease of 10,896 residents, are the only states in the south to lose population over the past year. This is a continuing trend.

But what’s happening in Mississippi is an outlier in the South, save for the Pelican State.

A look at the map of domestic migration, which measures where Americans are moving over the past year, shows a picture of the haves and the have-nots when it comes to population growth.

Large swaths of the Northeast and Midwest show a declining population, while the interior west, west coast (save for California), and the Southeast saw population gains. Substantial gains in some states. 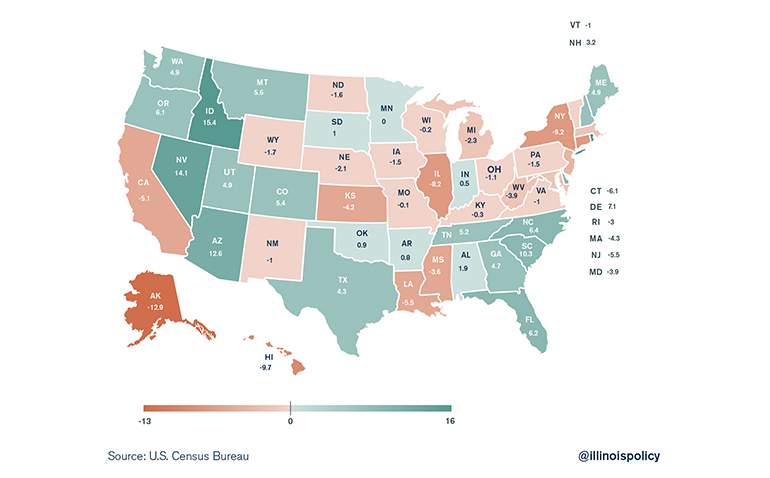 Mississippi had a negative domestic migration rate of 3.6, meaning for every 100 residents that moved to Mississippi last year, 103.6 left, according to analysis of Census numbers from the Illinois Policy Institute. Louisiana had a negative rate of 5.5. Every other southern state, south of Virginia, had positive numbers. Some smaller like 0.8 in Arkansas, some larger like 10.3 in South Carolina.

So people aren’t leaving the South, or running for liberal policy (see California, Illinois, and New York), they are just leaving Mississippi.

Mississippi over the past decade

While Mississippi’s population grew by about 20,000 during the first four years of this decade, there has been a sharp reversal dating back to 2015, save for a small positive uptick in 2017. The declines have been particularly noticeable over the past two years, losing more than 3,000 residents in 2018 and nearly 5,000 last year.

Mississippi’s population growth over the past decade was only 45th best. Even Louisiana, who has been on the negative side of things recently, had growth of about 2.5 percent last decade (compared to being slightly above zero in Mississippi).

Tennessee had the 17th highest growth in the country, while Alabama and Arkansas were middle of the pack. 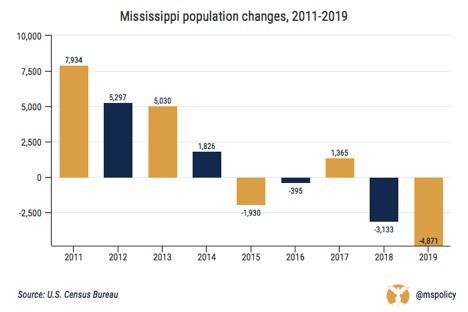 We can look at Mississippi and say things like, “we don’t have any cool large cities today that people want to move to.” But honestly, were Salt Lake City or Raleigh or Nashville that cool 30 years ago? They certainly looked and performed much differently than they do today.

People moved to those places because of opportunity. And there are policies the state can adopt that would put Mississippi ahead of the curve when it comes to national policy and positioning the state to be competitive nationwide.

For starters, Mississippi needs to move away from a desire to overregulate commerce and embolden government bureaucrats. Mississippi has more than 117,000 regulations that cut across every sector of the economy. A successful model to stem this growing tide would be a one-in, two-out policy where for every new regulation that is adopted, two have to be removed. If f a regulatory policy is so important, let’s make the government prove it.

The Trump administration adopted a similar executive order in 2017, and the numbers show we are actually seeing decreases greater than two-to-one, and these are not insignificant regulatory reductions.

This could be particularly beneficial in healthcare and tech policy. No department regulates more than the Department of Health, but our goal should be a push toward free market healthcare reforms that encourage choice and competition. In tech policy, the state has the opportunity to be one of the first states to essentially open the door for innovation, rather than one where entrepreneurs need to seek permission from the state. If Mississippi wants to get in the technology world, and we are convinced this is essential, a permissionless innovation policy in healthcare would be a big step in the right direction. In his recent article in the Mississippi Business Journal, Shad White pointed out the opportunity to focus on creating high margin businesses and jobs with a focus on healthcare tech innovation.

We should also not require people to receive permission from the state to work when they do move here. Open the door to productive citizens by allowing for universal recognition of licensing, following the path paved by Arizona. If you have been licensed in one state, that license should be good in Mississippi. Again, we could be ahead of the curve.

At the same time, our occupational licensing regime should be reviewed. Today, 19 percent of Mississippians need a license to work. It was 5 percent in the 1950s. While there are some occupations where a license is obviously prudent, we’ve expanded into far too many occupations.

This serves to lower competition and increase costs for consumers, while not providing those consumers with a better product. Occupational licensing is an example of how Mississippi misses the opportunity to grow her economy by acting in defensive ways to protect the slices of our economic pie for the well-connected when the reality is we could create a much bigger economic pie if we encouraged more creative disruption, competition, and risk-taking.

If Mississippi is to grow its economy, it will require not only keeping our best and brightest but also attracting others to come to the Magnolia State. Places like Tennessee, Georgia, and the Carolinas did not lose their Southern identities by encouraging newcomers. The economic engines in those states grow because of the quality of the entrepreneurs, capitalists, scientists, and productive people. Not that long ago, Charlotte and Meridian were exactly the same size. Economies are dynamic and once they get momentum, amazing things can happen. There is also the probability that a growing economy will have a “boomerang effect” – bringing back people born and educated here who left to pursue greater opportunities.

There’s no rule that Mississippi has to lose population. Alabama, with whom we share much in common, had a domestic migration growth of 1.9 last year. States like Tennessee, Georgia, and Florida may have done better, but we are not automatically immune to the success of our neighbors.

Finally, Mississippi needs to shed its abundant reliance on government and the public sector. Whether for public assistance, grants, contracts, jobs, or specific tax breaks, the citizens and companies in Mississippi are too dependent on state government. And the state is too dependent on the federal government. We have the third highest level of economic dependence on federal grants-in-aid in the nation (43%) and the fourth highest level of our economy driven by the public sector in the country (55%). Politicians, state agency directors, and government bureaucrats cannot create the economic growth we need. They can, however, work together with our various representatives and create an environment that allows and encourages private economic activities. Ultimately, with such an environment, it will be the entrepreneurs, business owners, productive workers, creative disruptors, capitalists, managers, and consumers who deliver the economic growth we all seek.

As the state auditor appropriately ended his article in the Mississippi Business Journal, the time to act is now.