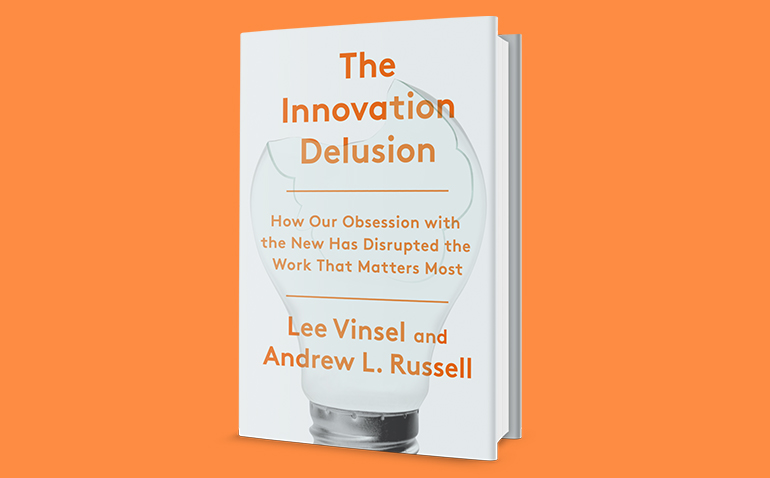 BPF Book Review | The Innovation Delusion – How Our Obsession with the New Has Disrupted the Work That Matters Most by Lee Vinsel and Andrew L. Russell

Harvard Business professor Clayton Christensen was catapulted to fame and fortune by his 1997 bestselling book, The Innovator’s Dilemma.  His framework for “disruptive technological change” was a game changer for business leaders, venture capitalists, Wall Street and eventually the everyday investor.

In time, its catch phrase “disruptive innovation” became the coin of the realm for the digital economy and a mantra for aspiring start-ups anxious to shake up the world and get rich doing so.

Flash forward to 2020 and the full fruits of the digital “disruptive innovation” surround us.  The stock market and the economy are dominated by a gaggle of the most successful digital disruptors, Apple, Microsoft, Amazon, Google and Facebook.  Today, these relatively young companies’ market value and reach far exceed the mighty industrial giants of the 20th century.

Now come two authors with concerns and some cautionary words on the cult of innovation as the cure-all for economic growth and prosperity.  Like Christensen, they are professors — Lee Vinsel, with the Department of Science, Technology and Society at Virginia Tech and Andrew Russell, Dean of the College of Arts and Sciences, at SUNY Polytechnic Institute.

“The Delusion” explained on page 158, “The Innovation Delusion is the false belief that the pursuit of innovation and novelty will lead us into the promised land of growth and profit when, in reality, it will lead us to ignore the ever-accumulating pile of deferred maintenance and infrastructural debt – and, in the process, lead individuals toward burnout and our society to accelerating levels of exploitation and inequality.”

A unique and defining trait of the digital economy is captured by Facebook CEO, Mark Zuckerberg’s famous motto, “Move fast and break things.”  That is much easier done in the world of software than in the realm of hard stuff and maintenance.

As the book’s subtitle suggests, the economic hyper focus on innovation has been to the detriment of maintaining the trillions of dollars of investment across the country in buildings, equipment and infrastructure.  As an example, the authors use the very old city of Baltimore, Maryland and its overwhelmed Public Works Department.  In 2013, the department had 4,000 miles of water lines, 2,500 miles of sewer lines, 1,200 miles of storm drainage and decades of deferred maintenance.  The total cost of replacement was $15 billion that Baltimore didn’t have.  It was and is a daunting challenge for a city still confronting middle class flight to the suburbs.  It is a sobering story but one that’s confronting towns and cities across the country to include Jackson, MS.