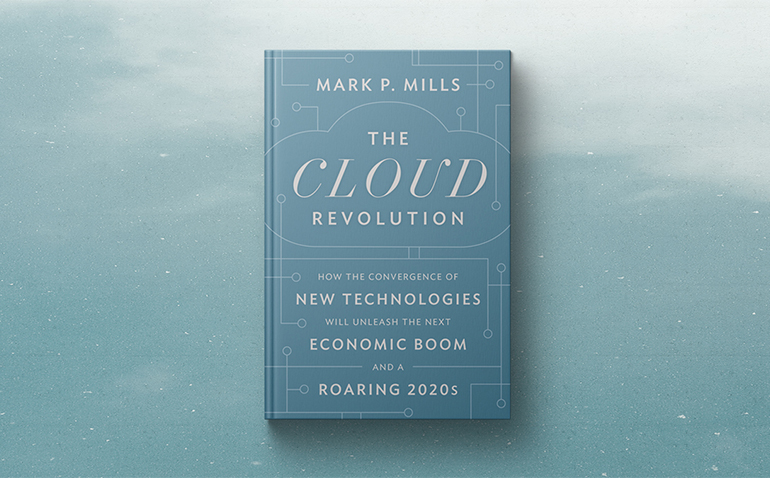 One of the most important economic books of 2021 is The Cloud Revolution: How the Convergence of New Technologies Will Unleash the Next Economic Boom and A Roaring 2020s by Mark Mills.  This is a great book for anyone trying to understand how the stock market can rocket thousands of points to all-time highs while the world is suffering and struggling through a global pandemic.  The author, Mark Mills, is no naive optimist promoting pollyannaish platitudes.  Far from it, Mills is a physicist by training and a serious intellect with a deep understanding of the hard sciences.

Mills’ resume includes stints as a science advisor in the Reagan White House, a faculty fellow at Northwestern University’s McCormick School of Engineering and Applied Science and a senior fellow at the Manhattan Institute.  In addition, Mark Mills is an expert on energy and coauthored The Bottomless Well with Peter Huber in 2005 when fears of “peak oil” were all the rage.  The book made the case against those fears that human ingenuity supported by science and technology would prevail in meeting the world’s voracious appetite for energy and power.  Six years later, Huber and Mills’ thesis was vindicated as fracking disrupted the natural gas markets first and then three years later the global oil industry.  In short, Mark Mills is a writer worth reading especially when it comes to the future.

So what is the cloud?  It is a quantum leap from the internet just as the internet was a quantum leap from telephony.  The cloud is all about “big data” and the building blocks are datacenters – hyper-scale datacenters (currently 500 worldwide), enterprise-class datacenters (over 5,000 worldwide) and smaller datacenters (8 million and counting).  Tying all those datacenters together with speed of light communications creates the largest Information infrastructure ever built.  Further connecting the cloud via wires and 5G wireless with millions of businesses, billions of people and tens of billions of devices will create vast new gains in productivity and unimagined opportunities.

The year 2020 marked the point that more than half of all data was stored on the cloud rather than on devices at home or at an office.  $20 billion a year is now being spent to expand current datacenters and build more on the edge.  The result is “the first civilization scale infrastructure.”  Mills concludes that the cloud will be to the 21st century what railroads were to the19th century and what the electric grid was to the 20th century.

But it took more than electricity to make the 1920s roar.  It took a confluence of advances in materials, machines and communications like the car, the electric motor, telephone and radio.  Mills argues persuasively that a similar pattern exists in the 2020s with complementary inventions in materials of construction such as graphene, A.I. (artificial intelligence)-infused microprocessors and machines such as 3-D printers on the cusp of commercial viability.  These new tools enabled by the cloud as the book title suggests “will unleash the next economic boom and a roaring 2020s.”

In today’s world of hyper partisan rhetoric and hand wringing, it is prudent to seek out views grounded in the hard sciences about what is realistically possible versus what may be just aspirational.  The Cloud Revolution is such a book.  Mark Mills has done a masterful job of explaining some of the latest cutting edge technologies and how they will impact business and the economy in the years ahead.  If you want to have a glimpse of where the future is headed, you should read this book.