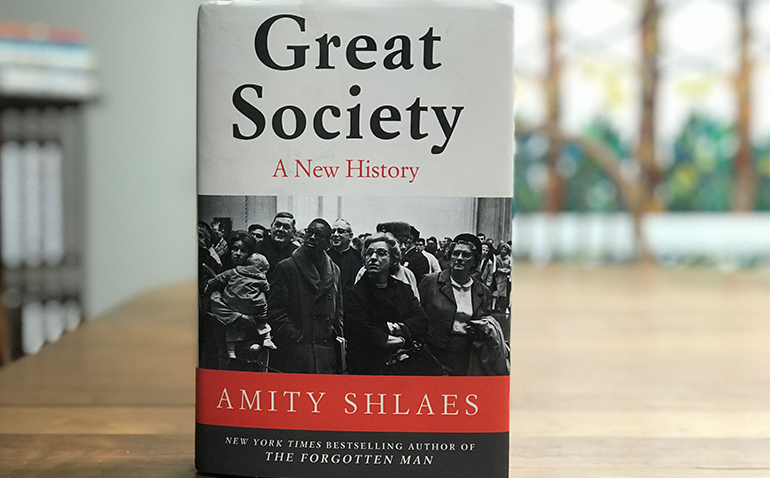 Amity Shlaes is a former Wall Street Journal columnist turned best-selling author and her latest book, Great Society: A New History is a great read.  For those who did not live through the 1960’s, it was a turbulent time for the country with civil unrest, social and racial upheaval, riots in major cities, the Vietnam War and the terrible assassinations of JFK, MLK and RFK.  Shlaes’ thorough and diligent research through newspapers, journals and personal memoirs provides a fascinating glimpse inside the Kennedy, Johnson and Nixon administrations during the turmoil of the 60’s and early 70’s.  As the title suggests, the book is focused on the massive “great society” social programs that President Johnson enacted during his almost six years as President.  It turned out to be a great lurch forward in the administrative state.

Great Society is an important contribution to the history of that era but readers today will find chapter 12 of special interest.  It deals with a culmination of severe crises that confronted Nixon in the spring of 1971.  The President faced the triple whammy of a slowing economy, exploding budget deficits from the “guns” of Vietnam and the “butter” of the ever expanding great society social programs and a currency crisis caused by growing foreign demand to exchange U.S. dollars for U.S. gold per the Bretton Woods agreement in place since 1944.  By 1971, gold was trading unofficially for $40 while the official exchange rate for gold was $35.  It was an arbitrage opportunity for countries such as France to exchange dollars for gold and they did.  Nixon greatly feared U.S. gold reserves being drained below the $10 billion mark.  The stresses culminated in a big policy pow-wow of his brain-trust at Camp David in mid-August.  It included Paul Volcker, Arthur Burns, George Schultz, Herbert Stein, Paul McCracken, Pete Peterson, John Connally, William Safire and President Nixon.  The hodgepodge of a package they cobbled together included wage and price controls, cuts in federal outlays and federal employment, tax cuts for consumers, tax increases on imports and most game changing of all — the closing of the gold window.  It was a pivotal point in American history in a very negative way.  President Nixon introduced his new package on national TV on August 15th.  For all the big thinkers at Camp David, the package was an economic disaster that would play out for the rest of the decade.  By the late 70s, stagflation and malaise were the key issues confronting the Presidential candidates.

I highly recommend Great Society (the book not the policies).  It is a great tutorial on how a large group of really bright people with good intentions can make a bad situation even worse with poorly conceived and uncoordinated solutions.

Another key theme in the book is the gold standard and how its discipline challenged policy makers and made their work difficult.  In the 49 years since the gold window was closed, total federal debt has gone from $400 billion to $24 trillion and the purchasing power of the dollar has dropped by 97%.

America now faces a global pandemic crisis that has shuttered large swathes of the U.S. economy.  And another President and brain trust are cobbling together innovative but untested policy schemes in hopes of resuscitating a faltering economy.  Let’s hope it all works out.