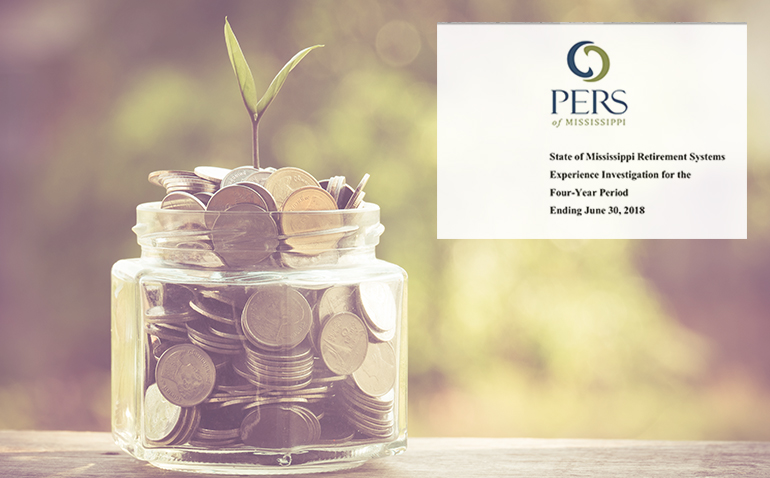 Every two years, the actuaries for Mississippi’s defined benefit pension system release a report that examines the economic and demographic outlooks that underpin the financial planning.

The newest one was released last month and the actuaries make some interesting recommendations for the Public Employees’ Retirement System (PERS), which serves most state, city and county employees in Mississippi.

First, they recommend to the PERS governing board that the pension fund reduce its expectation on inflation from 3 percent to 2.75 percent to reflect changes in forecast prediction models that predicate much of PERS’ future plans.

This also affects investment returns, which the actuaries think the expectation should be lowered again, this time from 7.75 percent to 7.5 percent. The board last decreased the expected rate of return from eight percent in 2015.

One of the most important changes recommended by the actuaries involved the plan’s prediction for the mortality of its participants. PERS actuaries use this formula to look ahead and predict where the plan will be in terms of benefits paid out, contributions paid in and how much will be available for investment.

With the average lifespan increasing nationally, tweaking this measure will ensure the board has a more accurate view decades into the future.

Doing so makes an already gloomy forecast for PERS’ future look even worse. The actuaries said in the report that PERS’ $16.9 billion in unfunded liabilities will increase under the new assumptions to $18.415 billion. The funding ratio will also decrease from 61.8 percent to 59.9 percent.

Most plans face the problem of increasing numbers of retirees supported by a shrinking pool of employees paying into the system. This problem will only get worse as the Baby Boomer generation heads to retirement.

According to data from the American Legislative Exchange Council (ALEC), Mississippi’s pension plan ranked 42th nationally. ALEC uses a different methodology for computing funding ratios and it has Mississippi with a dreadful 28.83 percent. This should be a red flag for elected officials and anyone interested in state government’s financial stability.

Connecticut is the worst in ALEC’s measure and its fund is only 20.28 percent fully funded.

ALEC uses assumptions for the future that aren’t as rosy as those used by the actuaries for PERS and other pension funds. Even with their more robust assumptions, Mississippi and countless other states are still in trouble.

Using the numbers from the pension funds’ comprehensive annual financial reports, Illinois is the least-funded pension fund, at 34.57 percent. New Jersey is the nation’s second worst and is only 38.41 percent fully funded.

Eventually, these deficits have to be made whole and it’ll likely require government bailouts, cuts to essential programs and large-scale tax increases.

Pension funds need to use more conservative estimates for investment income so their forecasts can be more realistic. Present workers need to be transitioned, much as the private sector has done, from defined benefits to 401k-type plans that won’t require constant infusions of taxpayer cash.

Specific to Mississippi, the PERS board should consider scaling back the ruinous and overly-generous cost of living adjustment that’s eating the pension plan’s seed corn. In 19 years, the cost of the COLA — also known as the 13th check — has increased 484.25 percent and represents 24.35 percent of all benefits paid to retirees.

The contribution rates for employees, which haven’t been increased since the Gov. Haley Barbour administration, need to be hiked as well.

Like with auto maintenance, PERS is a classic case of a painful outcome now or an excruciating consequence in the future. Either way, the bill will come due.