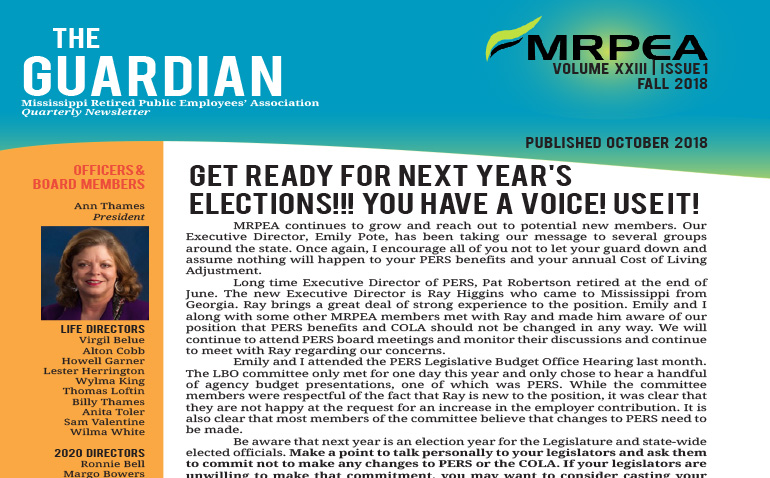 The Mississippi Retired Public Employees’ Association has made its position clear in regard to the state’s defined benefit pension system that serves most state and local employees.

The pension system is not to be touched.

With a bloc of 324,944 possible voters concerned with PERS, that’s no idle threat.  It’s little wonder that even small attempts to alter the pension system legislatively have been met with serious resistance.  Recommendations proposed by then Gov. Haley Barbour’s study group in 2011 are gathering dust in a closet in the Capitol.

It’s a short-sighted viewpoint as the pension fund continues to struggle —only 61.5 percent fully funded — despite a booming stock market.  It would be far easier and cheaper to make some reasonable reforms now rather than waiting for another crisis.

The MRPEA also says hands off to the cost of living adjustment that’s becoming a bigger drain on PERS’ resources.

PERS provides a COLA that amounts to 3 percent of the annual retirement allowance for each full fiscal year of retirement until the retired member reaches age 60.

Upon reaching that milestone, the three percent rate is compounded for each fiscal year.  Since many PERS retirees elect to receive the COLA in one lump sum at the end of the year, it’s called the 13th check.

Thanks to a June decision by PERS’ governing board, taxpayers will already have to pay $75 million in additional employer contributions for state employees, with local governments having to contribute $25 million.

The PERS board increased the employer contribution from 15.75 percent to 17.4 percent, necessitating a bigger appropriation in this year’s upcoming Legislative session.

The MRPEA needs to face reality — that without reforms that improve the plan, the plan will eventually run out of money.  The question is how long will that take, as the 2008 recession took a huge bite out of the pension fund’s bottom line and another downturn could be a body blow.