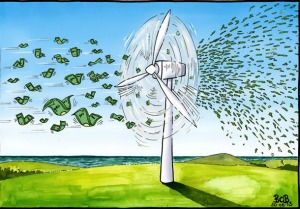 Last month, during its annual conference, the American Wind Energy Association issued a press release trumpeting the growth of wind-energy capacity. It quoted the association’s CEO, Tom Kiernan, who declared that the wind business is “an American success story.”

On the national level, wind-energy subsidies are worth nearly half the cost of wholesale power, and in the Texas market, those subsidies can actually exceed the wholesale price of electricity.

There’s no doubt that wind-energy capacity has grown substantially in recent years. But that growth has been fueled not by consumer demand, but by billions of dollars’ worth of taxpayer money. According to data from Subsidy Tracker — a database maintained by Good Jobs First, a Washington, D.C.–based organization that promotes “corporate and government accountability in economic development and smart growth for working families” — the total value of the subsidies given to the biggest players in the U.S. wind industry is now $176 billion.

That sum includes all local, state, and federal subsidies as well as federal loans and loan guarantees received by companies on the American Wind Energy Association’s board of directors since 2000. (Most of the federal grants have been awarded since 2007.) Of the $176 billion provided to the wind-energy sector, $2.9 billion came from local and state governments; $9.4 billion came from federal grants and tax credits; and $163.9 billion was provided in the form of federal loans or loan guarantees.

General Electric — the biggest wind-turbine maker in North America — has a seat on AWEA’s board. It has received $1.6 billion in local, state, and federal subsidies and $159 billion in federal loans and loan guarantees. (It’s worth noting that General Electric got into the wind business in 2002 after it bought Enron Wind, a company that helped pioneer the art of renewable-energy rent-seeking.)