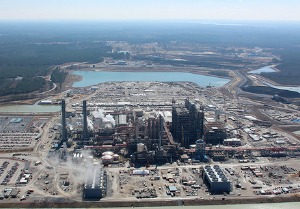 This is about electricity and power.  You may think about electricity only when it goes off.  Others think about it every time they get a bill.   It’s a monthly crisis.  They think: what can I not pay so I can keep the lights on or keep my business open?   Mississippi Power has 187,000 retail customers.  It raised their rates 18% beginning April 2013 to pay construction interest on its troubled Kemper County Lignite Plant.  In 2014 its 23 county service area lost 5,888 jobs while the rest of the state added 4,554.  (Source: Bureau Labor Statistics.) 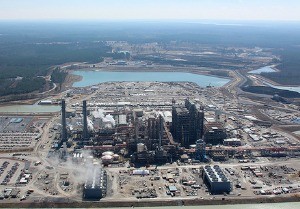 Photo by the Southern Company
HUGE UNDERTAKING: Another aerial view of the Kemper Project power plant, with the lignite mine in the background.

Power.  The power part of this story is not about power from electricity.  It’s about the power to decide how to generate electricity, what the generating plant will cost, who will pay for it, and how much customers will pay for its electricity.   It’s about the misuse and abuse of that power which flows from laws giving electric utilities exclusive monopolies in designated service areas.   In exchange for the monopolies, utilities are supposed to supply reliable, affordably electricity.  A three member Public Service commission regulates the utilities and sets their rates.   It is supposed to make utilities live up to their end of the bargain.  Mississippi Power has abused its power by building (or trying to build) a plant that can not supply reliable affordable electricity.  The PSC has abdicated its power by allowing it.   The legislature has made it worse by passing the Base Load Act so utilities can charge customers for plants before they are built.

Well, why not just buy cheap electricity somewhere else?   Or generate your own?    Some big industrial customers do.   But most retail (small) customers must depend on the monopoly that may mis-serve them.   Regulated monopolies can work although the market allocates capital and serves customers better than bureaucrats.   So why isn’t Mississippi Power’s working?   William Pitt, the elder, explained it 1770:  “Unlimited power is apt to corrupt the minds of those who possess it.”    Mississippi Power and its Southern Company parent don’t have have unlimited power.   But they have enough.

Corrupted minds.  It seems to have corrupted the minds of Southern’s CEO and the former governor.   They promoted Kemper and now rationalize its extra cost and harm.   They cite its temporary jobs but ignore permanent jobs lost.   They tout its temporary economic stimulus but not who pays for it.   They say it won’t hurt after thirty years.  So, don’t worry today and “Don’t Stop Thinking about Tomorrow” a’ la Bill Clinton’s 2004 campaign.   They are evasive about damaging facts and mistakes     They apparently live in an imaginary world like the emperor with no clothes.   Supporters pretend the emperors are infallible.   But the emperors have lost credibility.  Their courtesans could too.   Dissembling jeopardizes respect and trust earned by years of hard work and community service.

Here’s a damaging fact and an alarming heads up.  The 5,888 jobs lost in Mississippi Power’s service area following the 18% rate increase are just the beginning.   Bigger rate increases are coming if customers pay for Kemper’s gasifier.   It’s simple arithmetic.   The cost of electricity is the cost of the plant plus the cost of fuel plus the return (profit) to the company.   In Kemper’s case it’s the cost of two plants.   One is a combined cycle gas turbine generating plant completed two years ago for $900 million.  It is now generating  electricity from natural gas.    The cost of its electricity for the next ten years will average 6¢ per kWh on natural gas hedged for ten years at $3.76.  The other plant is the incomplete gasifier that’s supposed to convert lignite into fuel gas for the turbines.   Its cost is $5.3+ billion.  The company says customers should pay $3.3 billion of this.  On this basis, the average cost of its fuel gas will be $21 per million BTU’s, and the average cost of electricity from fuel gas will be 18¢ per kWh for the first ten years.  Its electricity will cost $3.8 billion more over ten years than electricity from natural gas.  That’s over $11,000 more per retail customer.   Could cause customer flight.

Mistakes.  Here’s a string of mistakes.   The gasifier was justified by secret projections of high natural gas prices that made fuel gas look cheap.  The projections were a mistake.  The gasifier cost estimate was a  mistake.  Engineering and construction mistakes magnified that mistake.  If the gasifier works, its fuel gas won’t compete with cheap natural gas even if the company writes off all overruns.   Why cook the projections to favor the gasifier?    Because it cost more.  Say what?   Yep.  More cost meant a bigger investment and more profit (over $200 million a year at the company’s 15% return).    Expensive was good for the company.  The emperors understood that.  Now they want customers to think expensive is good for them too.   Customers think it’s a mistake.   The emperors keep saying expensive is good.  Maybe repetition will make it so.   Maybe if enough people say it.

Who pays?  Who else will say it?   There are 28 electric utilities with over 7,000 employees in Mississippi.  They are a powerful presence.  They give to community causes.   Their officers often lead community organizations.   Five of the last ten Mississippi Economic Council chairs were utility executives.  The governor, who still has a large following, appointed a PSC commissioner who voted for expensive.  Mississippi Power has paid $1.4 billion to 524 Mississippi companies for work on Kemper.  It also pays legions of  lobbyists.   The companies’ owners and employees and the lobbyists understand expensive is good for them.  They may not know or care who pays.

But customers know expensive is not good for them, and they know who pays.  The new PSC commissioners will decide if it is.   If they decide it’s not, customers won’t pay for the gasifier.   The company will.  Won’t that blow some minds?   And maybe a fuse somewhere.