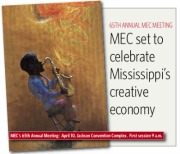 Leaders from across the state are showing great confidence in the direction Mississippi is moving and in the ability to improve its economic competitiveness, the Mississippi Economic Council (MEC) says in reporting on a survey done during the MEC’s Blueprint Mississippi Pathway to Progress Tour,.

Business and community leaders rate Mississippi as a newly emerging growth state, higher than any other category, the survey found.

Details from the survey will be among the highlights of the MEC’s Annual Report which will be presented at the organization’s 65th annual meeting April 10 at the Jackson Convention Complex. The meeting’s first session begins at 9 a.m.

Lunch speaker will be Gov. Phil Bryant followed by keynote speaker Peter Sims, an author, consultant and entrepreneur focused on the Creative Economy.

The entertainment portion of the annual meeting’s luncheon will be provided by Delta musician Steve Azar, a country blues and rock music songwriter, performer and producer. With albums that include “Waitin’ On Joe” and “Slide on Over,” Azar joined rock legend Bob Seger for 46 shows in a 2007 tour rated the Number One Tour in America by Pollstar magazine.

The Nissan Gospel Choir will also perform during the luncheon.

The luncheon session also will include Chairman Haley Fisackerly’s handing of the 2014-15 MEC chairmanship to Alveno Castilla of Butler Snow.

The first morning session is from 9 a.m. to 10 a.m. at which a group of entrepreneurs from across the state will address the impact of entrepreneurship on Mississippi’s economy.

Peter Sims will lead a session from 10:30 a.m. to 11:30a.m. on entrepreneurship and its economic effect.

Over the past four months, the MEC traveled to 19 cities in all regions of Mississippi to get input on ways the state can continue along its path to progress. Though an electronic response process, the approximately 2,000 attendees provided instant feedback on various issues. In addition to the more than 37 percent that view Mississippi as an emerging growth state, another 8 percent believe Mississippi has already become a hot economic development location.

Those participating in the voting were extremely optimistic about where Mississippi will be 10 years from now. Almost 38 percent see Mississippi becoming a hot economic development location, while another 34 percent say it will be an emerging growth state.

“The optimism really speaks to the opportunities that exist in Mississippi,” MEC President Blake Wilson said. “There is no doubt Mississippi has made great strides in the past 10 years, but when you look at where our leaders believe we will be 10 years from now it tells you a bright future is ahead.”

In addition to providing feedback on specific topic areas, attendees shared their thoughts on which goals of Blueprint Mississippi that should be the top priorities. The MEC releaded Blueprint Mississippi, a long-term strategic action plan for the state, in January 2012 with nine goals and 33 recommendations for accomplishing those goals.

Improving Mississippi’s economic competitiveness by providing a highly educated and well-trained workforce tops the list of Blueprint Mississippi priorities. “Increasing the Educational Achievement Level of Mississippians” finished as the top priority, receiving 20.6 percent of the vote, while “Cultivating a More Robust Workforce in Mississippi” earned 16 percent of the vote.

“When you think about it, education and workforce development go hand-in-hand,” Wilson said. “It is extremely important that we focus on ways to continue to prepare for the jobs of the future as Mississippi shifts from a low-wage, low-skill labor force to a labor force that requires more advanced skills. Combined, more than 36 percent place this as the top priority. It shows leaders from across to the state understand just how important it is to have a well-education, quality workforce.”

One of the ways to help achieve this goal is through strong career and technical curriculum in high school and 86 percent of participants view this as very important. Also, 85 percent believe it is either very important or somewhat important that Mississippi has common educational state standards (common core) to drive student performance.

Participants also weighed in strongly on infrastructure, with 85 percent indicating that transportation infrastructure was very important to the future of economic development in the state. Almost as many, 81.5 percent, also expressed concerns about the condition of Mississippi’s roads, ranking them only average to poor.

MEC uses input from the statewide tour to set priorities and determine its program of work for the upcoming year. “We appreciate the input of so many leaders from around our great state.” Wilson said, “We cannot be the ‘Voice of Business in Mississippi’ if we don’t take the time to listen closely to what is important to our members.”