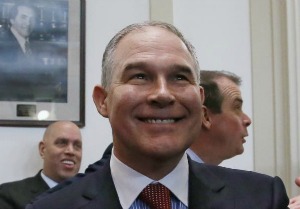 researchers are manipulating data to support climate alarmism, Scott Pruitt — President Donald Trump’s nominee to head the Environmental Protection Agency — is right to call for open debate on the science.

At stake are trillions of dollars, countless jobs, and, if the climate scare is justified, the fate of the global environment. The public needs to have confidence that this is not just a politically convenient crusade devoid of solid scientific support.

Last week, former NOAA scientist Dr. John Bates publicly announced his concerns that an influential science paper published just before the Paris climate conference did not follow government data integrity guidelines. Bates charged that the NOAA paper, published in the journal Science in June 2015, used misleading and unverified data to demonstrate that the slowdown in global warming reported in 2013 by the United Nations Intergovernmental Panel on Climate Change (IPCC) did not exist. As reported by London’s Daily Mail, Bates said that Thomas Karl, the paper’s lead author and, at the time, director of NOAA’s National Centers for Environmental Information, was:

… insisting on decisions and scientific choices that maximized warming and minimized documentation … in an effort to discredit the notion of a global warming pause, rushed so that he could time publication to influence national and international deliberations on climate policy.

[Bates’] vehement objections to the publication of the faulty data were overridden by his NOAA superiors in what he describes as a “blatant attempt to intensify the impact” of what became known as the Pausebuster paper.

Bates, a 2014 Obama administration gold medal winner for his work on climate data records, retired from NOAA in November after a 40-year career in meteorology and climate science. Only now has he been able to expose this latest example of the corruption that has infected so many government climate offices.