The company, in its most recent 8-K filing with the U.S. Securities and Exchange Commission released Thursday, said added Kemper Project costs in May were due to “additional resources in support of start-up activities and commissioning activities.” 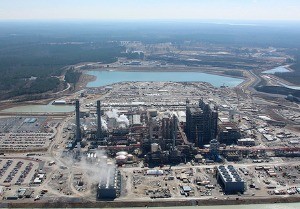 HUGE UNDERTAKING: An aerial view of the Kemper Project integrated gasification power plant, with the lignite mine in the background. Photo Credit: Southern Company

The now $6.229 billion plant is billions over budget, two years behind schedule and has sparked a series of lawsuits. It is designed to convert the state’s abundant lignite coal reserves, mined nearby, into a natural gas-like substance called synthesis gas to burn in its electricity-generating turbines, which have been generating electricity on natural gas since August.

The utility’s request for a rehearing — in a lawsuit brought by Hattiesburg businessman Thomas Blanton over rate increases to fund the Kemper Project — was denied last month by the Mississippi Supreme Court.

The court ordered the company to refund its 186,000 customers for the 18 percent increase, which would add up to around $281 million. The Mississippi Public Service Commission, the regulatory body for utilities, will meet Tuesday at 1o a.m. and a refund order could be forthcoming.