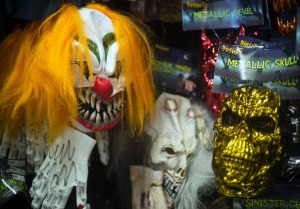 regular meeting on Monday that makes it unlawful for any person of any age to appear in public in Kemper County in a clown costume, clown mask or clown makeup. The ordinance was signed into effect by Kemper County Board President Johnny Whitsett at 11:28 a.m. on Monday and expires the day after Halloween.

The ordinance is enforceable by the Kemper County Sheriff’s Office and violators can be fined up to $150.

But this likely violates the First Amendment. Wearing costumes is constitutionally protected, as the Supreme Court held in Schacht v. United States (1970), a case dealing with actors who were prosecuted for wearing a military uniform as part of political street theater; and the court has long protected speech engaged in for entertainment purposes as much as speech engaged in for overtly political purposes (e.g., Winters v. New York (1948);Brown v. Entertainment Merchants Ass’n (2011), the violent video game case).