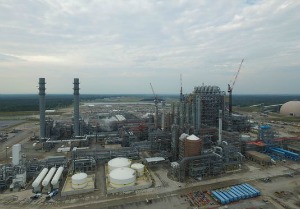 Officials from Mississippi Power Co. say construction on the company’s power plant in Kemper County is nearing its end.

During an editorial board meeting Wednesday at theHattiesburg American, Mississippi Power president and CEO Ed Holland said work on the plant — officially known as Plant Ratcliffe — and its associated lignite coal mine is “about 99 percent complete.”

“If you had gone there six, eight months ago and stood up in the top of the facility and looked down, you would have seen pipe and other equipment out in the laydown yards,” he said. “Go up there today, and it’s virtually cleared — all that’s been installed.

“We are in full-fledged start-up mode right now, with testing of the various systems. We have certain milestones that we set out for us to get to — commercial operation sometime in the first half of 2016.”

The plant has endured its share of recent criticism after a series of cost overruns and delays. The plant and mine originally were estimated to cost $2.8 billion, but in early September Mississippi Power announced the costs had been pushed to nearly $6.3 billion.

But Holland said even though the Public Service Commission capped the capital cost of construction at $2.88 billion, they also allowed for additional uncapped costs to be recovered.

Holland said most of the overruns are associated with piping and cable the company had to install in the plant to finish construction.

“This is not at all unusual for first-of-a-kind technology. The commission — and it was very wise on their part — they put a cost cap on what the customers would pay, and as a result of that, every bit of the cost overrun is being paid for by the shareholders.”

“In 2009 and 2010, when we were asked how much rates were going to go up when Kemper came online, we told everybody who asked that they were going to go up somewhere between 34 and 38 percent,” Holland said. “We didn’t try to hide the fact that there was going to be a significant rate increase. Since that time, we’ve worked diligently to try to find ways to mitigate the impact of that rate increase.