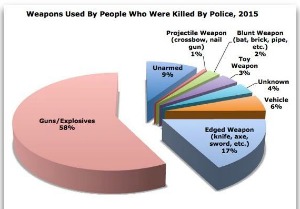 Note: While not the usual fare of WUWT, after some discussion with Mr. Eschenbach, I decided that this was an impartial data analysis, and that publishing it would be a public service that may be helpful in these troubled times. However, given the sensitive and inflammatory nature of the subject matter in the context of today’s events, I’ve decided not to allow comments on this article. The data speaks for itself, and the goal here is to present the data analysis minus the rhetoric the topic will generate. I take no position on the topic, but I do feel that better data presentation leads to better understanding of problems, and this data presentation may be helpful to many. There are other forums where I’m certain this data and the results will be discussed. – Anthony Watts (updated, headline was extended at 2PM PST)

I got to thinking about the issues of race regarding the recent tragic police shootings, both the shootings of police and the shootings by police. The best data is from the Washington Post, which has a detailed site listing all of the people killed by police, which begins in 2015 and goes to the present. I thought I’d analyze their data. I looked at the data for the year 2015 because the full 2016 data is not in yet, and also in order to be able to compare it to other annual datasets.

First, there were 990 fatal police shootings in 2015. How does this compare to other causes of death? Well, I can’t tell you because so few people are killed by police. The number is so small that it is outside the range of the usual mortality lists. I can say that death by police is not in the top fifty causes of death in the US, so it is relatively rare. It is extremely rare for women, because the overwhelming majority of those killed by police were men.  And I would be greatly remiss if I did not highlight that in addition to the 990 civilian deaths, there were 51 police deaths in 2015 …

Regarding the civilians killed by police, more than nine-tenths of them were armed at the time—58% of the people killed had a gun or explosives, 17% wielded a knife or edged weapon, 9% were unarmed, 6% used a vehicle, and tragically, 3% had a toy weapon. The rest used mostly clubs, hatchets, hammers, baseball bats, the usual assortment of your basic stone age deadly weapons that can kill you just as dead now as they could in 1500 BC.

By race and ethnicity, there were 494 whites, 258 blacks, 172 Hispanics, 15 Asians, 14 American Indians or Alaskan natives, 9 “other” races, and 28 deaths with the race not specified. Which leads to the question … is there a racial imbalance? And in particular, are African-American people being killed at an excessive rate?

Now, many folks calculate the death rates of the groups by comparing the numbers killed, to the corresponding numbers of that group in the general population … but you can’t do that. It leads to wildly incorrect conclusions. Here is an example that shows why comparing numbers of police shootings to the corresponding number of individuals in the general population leads to big errors:

Men make up about 50% of the general population, but men comprise 96% of those killed by police. Does this huge number of “excess male deaths” prove that the police are being sexist and that they are biased against men? Does this imbalance in the number of men killed mean that we need a “Male Lives Matter Too” movement?

The one thread in the Washington Post database that is common to the overwhelming majority of police shootings is that almost all of the civilians were killed while resisting arrest. The records of the deaths show that to keep from going to jail, people were fighting with the police; they were shooting at the police; if they didn’t have a weapon handy they were punching the police or trying to drown the police; they were trying to run the officer over with a car or smash the officer’s skull with a baseball bat … but regardless of the endless variations of method, almost everyone killed by the police was in exactly the same situation—no less than 97% of the people fatally shot by police were killed during the course of an arrest that went bad when the people tried to resist