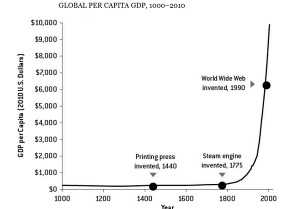 I got an email today that contained a blog post about another subject unrelated to climate or energy, but it had this graph in it that caught my eye:

The invention of the steam engine (which used coal and wood at first, with oil and natural gas coming later) seems to be the catalyst for change in the human race. Now that’s a hockey stick we can all get behind!

Wikipedia has a similar graph:

Source: Victor V. Claar, “The Urgency of Poverty and the Hope of Genuinely Fair Trade,”Journal of Markets & Morality 16, no. 1 (Spring 2013): 274. GDP figures from J. Bradford DeLong, “Estimates of World GDP, One Million B.C.—Present.”

This chart demonstrates just how real this “mountainous rise of well-being” has been over the last two centuries. What makes these economic gains even more astounding is that there has been a simultaneous population explosion. There are many more “capita” included in the “per capita” as the chart moves to the right, yet we still see enormous gains in per-capita GDP. As the economistDeidre McCloskey puts it,

Never had such a thing happened. Count it in your head: eight and half times more actual food and clothing and housing and education and travel and books for the average human being—even though there were six times more of them.

Yet a Barna Group survey released this past April found that most Americans remain unaware of these economic gains: “more than eight in 10 Americans (84%) are unaware global poverty has reduced so drastically. More than two-thirds (67%) say they thought global poverty was on the rise over the past three decades.” Both the reality of global poverty (1.2 billion people remain in extreme poverty) and the public perception of poverty’s pervasiveness and intractability deserve increased attention.