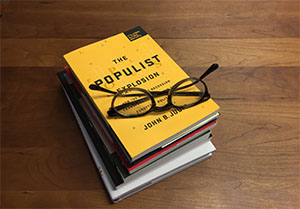 The Populist Explosion – How the Great Recession Transformed American and European Politics by John Judis, October 2016.

Over the past five decades, John Judis has written extensively on politics in magazines and books.  His new book, “The Populist Explosion” published in October 2016 is perfectly timed to catch and explain the Katrina-sized populist wave that is now crashing down on the political establishment in the U.S. and Europe.

The book begins with a primer on populist politics in America and the important role it has played in shaping and influencing America’s political parties over the past 150 years.  The author points out on pages 16-17, American populist movements have arisen only under very special circumstances…The populists express these neglected concerns and frame them in a politics that pits the people against an intransigent elite.  By doing so, they become catalysts for political change… the populists roil the waters.  They signal that the prevailing political ideology isn’t working and needs repair, and the standard worldview is breaking down.  That’s why Trump and Sanders are important in America and why the populist left and right are important in Europe.”

In other words, populism can and should be a dynamic force for disruptive change in political parties that are failing to heed the concerns and desires of the electorate.  The 2016 U.S. Presidential campaign was a unique example in that the establishment politicians and also the professional pundits, who are paid to analyze politics, were proven wrong time and time again.  In hindsight, it is reasonable to conclude that their “standard worldview” which was working fine for them was in fact in the process of breaking down.

Across the Atlantic, the Brexit vote in June 2016 was an excellent example of populism at work in Europe.  On page 139, Judis quotes British journalist David Goodhart, “The modern social and economic liberalism, that dominates all the main political parties has produced an economically abandoned bottom third of the population with no real chance of ever gaining a share in prosperity; and an even larger group who feel a vague sense of loss in today’s atomized society in which the stability of family and the identity of place and nation has eroded.”

A key take-away from the book is the need to take populist movements seriously and not dismiss them out of hand.  From page 157, “The heated denunciation of these campaigns and parties, based on inexact historical analogies, makes it difficult to understand why what populists say resonates with the greater public, and how they are pointing, however imperfectly, to real problems that the major parties are downplaying or ignoring.”

The ruling classes of the major political parties have had a rough go of it over the past 18 months.  What is needed for them to repair their working world view is less ruling and a lot more listening.